In his U.S. television debut, computer-generated Ned the Neanderthal has much to tell us about the last 100,000 years of human history.

If the term “Stone Age family” recalls for you the Hanna-Barbera cartoon series The Flintstones, you’re in for a shock: The folks who were living in Europe before the arrival of Homo sapiens looked nothing like Fred and Wilma.

You’ll be able to see this for yourself soon, when the richly detailed show Neanderthal appears on public television stations across the United States. Produced by the British Broadcasting Corporation, the full-length documentary will air on two successive Wednesday evenings, October 17 and 24.

Narrating the show is Ella Al-Shamahi (shown below with actor Nick Kellington), a doctoral student in paleoanthropology at University College London. True to her avocation as a stand-up comic, she guides the viewer through some fairly dense scientific material with a light touch. Contrary to their public image, she says, Neanderthals were not “knuckle-dragging ape-men” who, 40,000 years ago, “shuffled off into extinction.” Many different types of scientific evidence show how similar they were to us. Moreover, the Neanderthals have left an enduring legacy: an array of genes that billions of us—not everyone alive today, but most of us—have inherited from them. 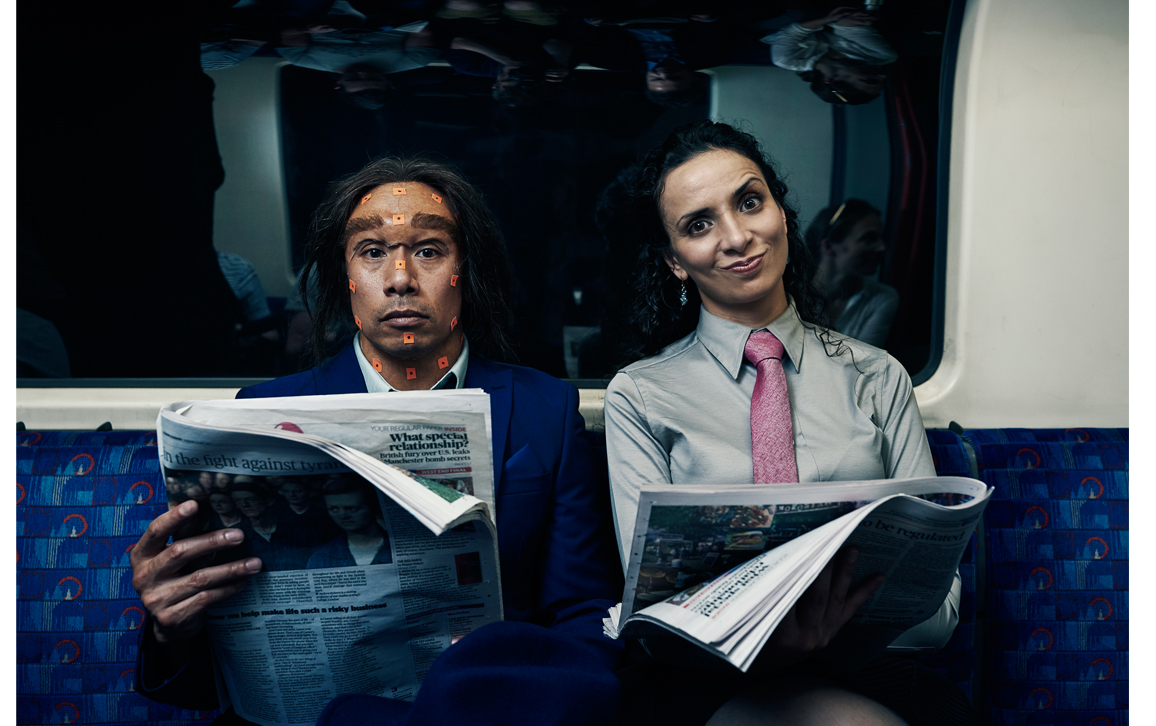 Less than a decade ago, researchers at the Max Planck Institute for Evolutionary Anthropology announced they had found fragments of Neanderthal DNA in the genome of modern humans—a development that should help erase the cherished image of Homo sapiens as a separate, superior order of being. Rather than replacing their forerunners, modern humans more or less incorporated them.

“And the only way that could have happened,” says Al-Shamahi, “is if somewhere. . .

(At this point in the narration, the camera brings viewers into a cave where two figures sit by a cozy fire. The female, closer to the camera, has decorated her face with red ochre and gray ash. She wears feathers and beads in her hair, and the beads strung around her neck catch the firelight.)

(The female, eyes downcast, demurely sidles close to the male figure. He turns to look earnestly at her.)

“Neanderthals and early modern humans were having children together.”

(The two stand up, and she leads him away into the darker recesses of the cave.)

This scenario is a dramatization, of course. The true story may have been much less romantic, perhaps involving tribal raiding or rape more often than genuine affection, but the outcome would have been much the same. In any case, the presence of Neanderthal DNA among the genes of humans today means the two groups did interbreed on occasion.

This genetic legacy means something else, too: The constraints and demands of Neanderthal life can affect our health even today.

For instance, genes that may have helped Neanderthals hoard and store calories in their bodies for survival during long, harsh winters may now work against us, making it all too easy to put on weight and much more difficult to take it off again. Other genes, which perhaps allowed Neanderthal populations living in the far north to absorb sunlight efficiently through their skin, may now predispose some people to sunburn quickly. The investigation of this tricky genetic legacy is still in its very early stages.

Al-Shamahi’s mission, “to unlock the secrets of these mysterious ancestors of ours,” leads her to a studio where scientists and film technicians are collaborating to build a scientifically accurate, computer-generated Neanderthal. Combining the best fossil evidence available with expertise in anatomy, biomechanics, paleoanthropology, motion-capture camera work, and animation, this unique crew assembles utterly lifelike three-dimensional figures, dubbed Ned and Nelly Neanderthal.

To make the computer-generated Neanderthals as lifelike as possible, the crew enlists the help of Kellington and of actress Cicely Fay. The actors wear close-fitting outfits dotted with motion-sensing patches. (Kellington can be seen wearing orange motion-capture markers in the photos above.) Under the direction of the paleoanthropologists present, they perform all the activities that the computer-generated imagery (CGI) Neanderthals will be shown carrying out in the television show: standing up and sitting down, spearing a large animal at close range, walking through heavy snow, and so on.

Multiple cameras collect the data on the actors’ movements, and this information is mapped onto the more muscular, stocky bodies of the computer-generated Neanderthals. Finally, to give Ned the range of expression of a live individual, the actor and motion-capture genius Andy Serkis (known to legions of fans for his portrayal of Gollum in the film series Lord of the Rings) dons a high-tech headpiece, shown in the photo of Serkis below, that records the movement of every tiny facial muscle. These data, too, are mapped onto the face of CGI Ned. 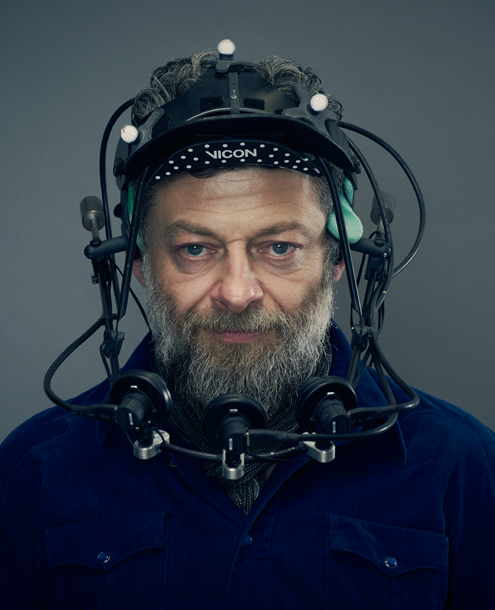 The process is fascinating, as are the results. We see how easily a Neanderthal could blend in among a crowd today, as Ned (in the person of Kellington, wearing a suit and motion sensors, and with matted hair and special-effects makeup) accompanies Al-Shamahi onto the London Underground, where he scarcely merits a second glance. Elsewhere in the show, we see CGI Ned and some underdressed friends of his collaborate in a hunt for large game, while other Neanderthals go about their domestic chores: hafting stone points onto heavy wooden spears with home-cooked glue and teaching their children how to scrape the fur off hides.

In all these challenges, the Neanderthals acquit themselves more than capably—so much so that viewers may begin to wonder whose survival skills were superior to whose. After all, the Neanderthals lived on this planet successfully and sustainably for several hundred thousand years. Whether modern humans will be able to match their record is an open question.

Al-Shamahi concludes, “It turns out the Neanderthals were stronger, smarter, faster, better-looking, and much, much more like us than we ever thought.” They probably weren’t as much fun to be around as the cavemen and cavewomen of cartoons. They almost certainly didn’t trade humorous barbs à la Fred and Wilma Flintstone.

Nevertheless, in their computer-generated embodiments, Ned and Nelly Neanderthal are large as life and at least twice as natural. Watch them, and you may be surprised by how much you can learn about yourself.