The Blooming of a Corpse Flower

Usually, you’d want to stay as far away as possible from a smell described variously as being like the odor of a “dead rat,” a “moldy bath mat,” or “cabbages and death.” However, people recently flocked to Cambridge University Botanic Garden to sample this unpleasant-sounding aroma for themselves. The explanation for their interest lies in the source of the smell: The rare occurrence of a flowering Titan Arum plant, commonly known as a corpse flower.

Native to the rainforests of Sumatra in Indonesia, the Titum Arum’s life cycle is a curious and patient one. A germinating seed develops into an underground corm, which pushes out a single leaf that can reach the height of a small tree and branch into numerous leaflets. For many years its life cycle will consist of this single leaf growing, then dying after several months, then a new one growing in its place. Flowering doesn’t happen until the plant is at least 7 to 10 years old; after this initial flowering, some plants manage to flower every 2 to 3 years. But others can take another 7 to 10 years, as is expected for the one in Cambridge. 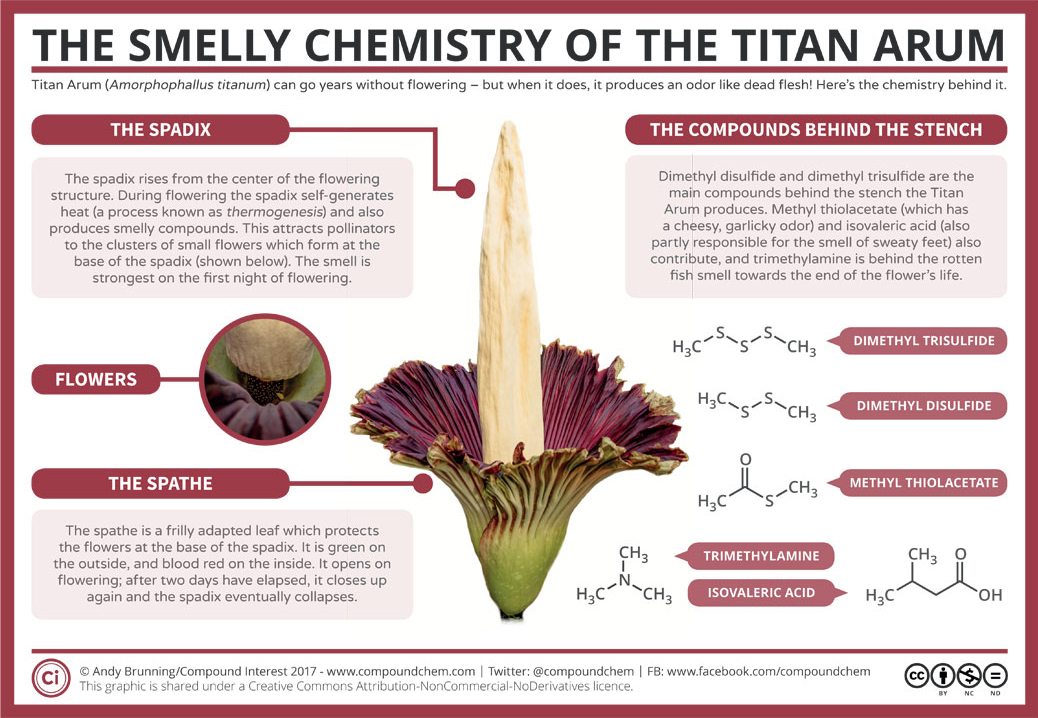 When the Titan Arum does flower, it’s over very quickly. On the first day of flowering, the spathe (the frilly adapted leaf around the base of the spike, or spadix) unfurls, revealing its blood-red inner coloring. The spadix then starts to self-generate heat, a process known as thermogenesis. And it starts to produce foul-smelling compounds, a carrion cologne designed to lure pollinating carrion beetles.

The first night of flowering offers the most intense odor. The lured carrion beetles scurry to female flowers that have opened inside the flowering structure; ideally they bring pollen from other Titan Arum flowers with them. By the end of the second day of flowering, the odor is much less intense, and the plant’s male flowers then open; as the carrion beetles depart, they pick up pollen from these flowers, which may eventually find its way to another Titan Arum.

The odor of the Titan Arum is contributed by several compounds. The key odorants are sulfides; dimethyl trisulfide lends a rotting, animal-like sulfury odor, whereas dimethyl disulfide has a garliclike smell, but likely doesn’t contribute as much to the overall odor because of its higher odor threshold. Other compounds present include isovaleric acid, a chemical that also makes a significant contribution to the smell of sweaty feet, and methyl thiolacetate, which smells like an unsavory blend of garlic and cheese. Finally, as the flowering structure collapses, trimethylamine delivers a final blow to your olfactory senses, carrying with it a waft of dead fish.

The Cambridge Botanic Garden’s specimen started wilting after just over a day of flowering. Some flowers can last for a few days more. But workers at the garden had attempted to pollinate their Titan Arum using pollen obtained from the Eden Project’s Titan Arum, which flowered earlier in the year. The spadix sagging so quickly may mean success, although they’ll have a wait to find out. —Andy Brunning 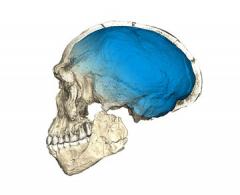