Surprising altruism and other cooperative behaviors in the microbial world.

Joan E. Strassmann of Washington University in St. Louis studies social evolution on the very small scale: Her test subject is Dictyostelium discoideum, an amoeba that is better known as cellular slime mold. Belying its unglamorous name, this social amoeba is an important model for multicellularity and the emergence of simple cooperative behaviors. Strassmann collaborates with her husband, biologist David Queller, on much of her work. She spoke with associate editor Katie L. Burke about the discoveries that have emerged from her investigations into the surprising altruism and other cooperative behaviors in the microbial world. 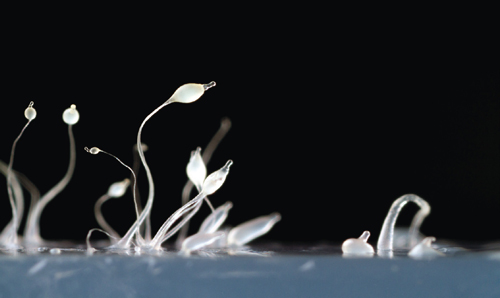 When most people hear the word amoeba, they don’t think of something that’s social. What is “social” about the amoebas you study?

When they enter the multicellular stage, the amoebas grow stalks, form fruiting bodies, and disperse spores that can produce new amoebas. That requires some cells to sacrifice themselves, because the stalks die off, but you’ve found that some amoebas cheat to stay alive. How does that work?

One of the big questions we have is: Why haven’t the victims of cheating gone extinct? One answer might be that things are not at equilibrium: Microbes live in a highly diverse community, so maybe they haven’t met everyone. Another answer might be that there are a lot of trade-offs. The microbes that win at cheating might divide more slowly, for instance, or they might have some other sort of characteristic that keeps polymorphisms [genetic variants] in the population. We don’t know which of those is true. That’s an area we’re working on.

One of the fundamental ideas in modern evolutionary biology is kin selection—the idea that cooperation evolves when it benefits relatives of the cooperator. Worker ants, for example, do not mate but pass on their genes by helping the queen. What do cheating amoebas tell you about the nature of social evolution?

Even though there are both cheaters and noncheaters in the wild there is no social parasite that is completely dependent on another clone to make a stalk. One clone might cheat another, but then it might be a victim to a third clone. One of our students, Owen Gilbert, looked at more than 3,000 wild-collected cells and did not find any total cheaters in that sample. To get this kind of cooperation where 20 or 30 percent of cells die to make the stalk, there must be fairly high genetic relatedness within the group of D. discoideum at the social stage. So, even if two unrelated clones come together, and even if there’s cheating, in the end cells of both types will be represented in both the spores and the stalk. Even if one is the “loser” it just means it’ll have a less favorable representation, not that it won’t have any.

Every cell that dies in the stalk is benefiting a relative in the spores, and so we then wondered, “What if we set up a genetic system so that the cells in the the fruiting body, those of the stalk and spores, no longer associated at random instead of with close relatives?” We did this in an experiment by Jennie Kuzdzal-Fick, a graduate student in our lab at the time. We found that most of the lines cheated on their ancestors and contained pure social parasites that couldn’t make stalks. That was an exciting result, because it showed the importance of genetic relatedness between the altruists in the stalk and the beneficiaries, the spores.

You also have found a primitive kind of “farming” in D. discoideum. How does that work, and how does it compare to other examples in the animal kingdom?

Human agriculture requires investing in a crop—it could be a plant or an animal, because I count animal husbandry as agriculture here. You don’t harvest the benefit of that investment immediately. If you care for your crop and then somebody else gets the product without having invested, you’re going to lose out. All forms of human agriculture require some system that lets the benefit go to the ones that work for it, or go to their family. In animals, there are several comparable examples of what we’d call farming. Fungus-growing ants are one. The ants keep fungus gardens inside the nest. They harvest leaves, feed the leaves to the fungus, and then eat the fungus. There’s a damselfish that farms and defends algal plots. It weeds them to get rid of the kinds of algae it doesn’t like. In these systems, the benefits of farming are again shared with the farmer’s kin.

Debbie Brock in our group discovered a kind of farming in Dictyostelium. Normally, the amoeba eats bacteria like a standard predator. Lions do not herd gazelles; they just eat them. That’s what everyone thought Dictyostelium did, too. The solitary amoebas eat bacteria by engulfing them. But Debbie noticed that within the fruiting bodies of certain clones—we call them farmers—there were intact bacteria inside the spores. To carry bacteria through the social stage, the amoebas must have protected the engulfed bacteria instead of digesting them. When the spores hatched out into amoebas later, the bacteria would be released into the new environment.

We noticed that these farmer clones started the social stage before they had eaten all the bacteria. We interpret this as meaning that they’re prudent farmers, because they don’t eat all the food. We consider this a primitive form of farming, though, because to our knowledge they do not actively cultivate the bacteria in the way that, for example, fungus-growing ants cultivate their fungi. We also showed that in the social stage, they do not move as far as other varieties of clones, which you might also expect because they’re carrying their own food. They don’t have to hunt down new food; rather, they hunt down nutrients for their bacteria.

More recently, Debbie discovered that farmer amoebas carry other bacteria, which they use to defend and privatize their food bacteria. These defensive bacteria secrete an antifungal and may inhibit nonfarmer clones’ spore production. A collaboration with Pierre Stallforth and Jon Clardy showed that the farmer and defensive bacteria differed only by a single stop codon [a point mutation that interrupts protein translation], changing the bacterium from an inedible weapon into food. It’s like the crop evolved to be eaten.

If farming is a good feeding strategy, why don’t all the amoebae do it? Why do nonfarming clones live alongside the farming clones?

Why there’s a polymorphism in this trait is a puzzle, and we also don’t know for sure if it’s the bacteria or the Dictyostelium that confer the trait. Dictyostelium species are often found on feces, where there are lots of good bacteria to eat. One untested hypothesis is that farmers may not be favored on feces [because food is abundant]. We are working on this hypothesis with two high school students, Fisher Brodie and Jesse Galloway, at Mountain Lake Biological Station in Virginia. They’re collecting samples of deer feces and of soil nearby. Then we’ll culture them to see what we get. We don’t know why there are both farmers and nonfarmers, but we’ve seen both in a variety of populations of D. discoideum as well as in other species.

It’s amazing that something at all analogous to human farming can exist among single-cell organisms. Where are you going next in studying this phenomenon?

These complex interactions between a single-cell eukaryote [cell containing a nucleus and organelles] and a bacterium are much more easily studied than would be the case if the eukaryote were a long-lived insect or animal. We can look at coevolution and mutualisms; we can look at the balance between infection and cooperation. Because of the ease of working with D. discoideum in the lab, coupled with our growing knowledge of the genetics of the organism as well as the bacteria it associates with, we can study how its associations with bacteria change in different genetic or environmental contexts. We hope to make this a model system for understanding bacteria–eukaryote interactions. 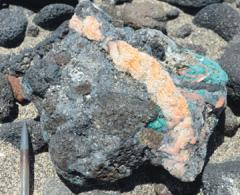