New computing applications are ahead for soft materials that can guide light.

When viewing light that is changing in intensity, molecules in the human eye called chromophores undergo transformations that, in turn, prompt nerve impulses to the iris, which then physically opens or closes in response to the changing light intensity. Such feedback loops are common in biological systems, but are rare in synthetic materials because it is a challenge to give synthetic materials those transformational capabilities. One reason researchers undertake that challenge is to make light-guiding-light technologies, which may one day provide circuitry-free calculations, light-prompted movement in soft robots, and better targeted-drug therapies.

A team of researchers from McMaster University in Canada, the University of Pittsburgh, and Harvard University have made a synthetic material with a feedback loop similar to that of the human eye. They did it by employing a type of synthesized chromophore called a spiropyran—which is like the molecule used for tinting transition lenses in eyeglasses—and embedded it in a hydrogel, or a network of cross-linked polymers that can hold a lot of water.

“What happens in our system,” says Kalaichelvi Saravanamuttu, a chemist at McMaster University, “is that light triggers the transformation of the spiropyran, which in turn affects the hydrogel itself” with what is essentially a contraction. That contraction squeezes out water from the hydrogel, but only where the light is striking the polymer. That local loss of water means a local difference in the amount of the polymers through which the laser is passing, which keeps the laser light from diverging as it normally would into a cone shape (see schematic video below, seconds 1–5). 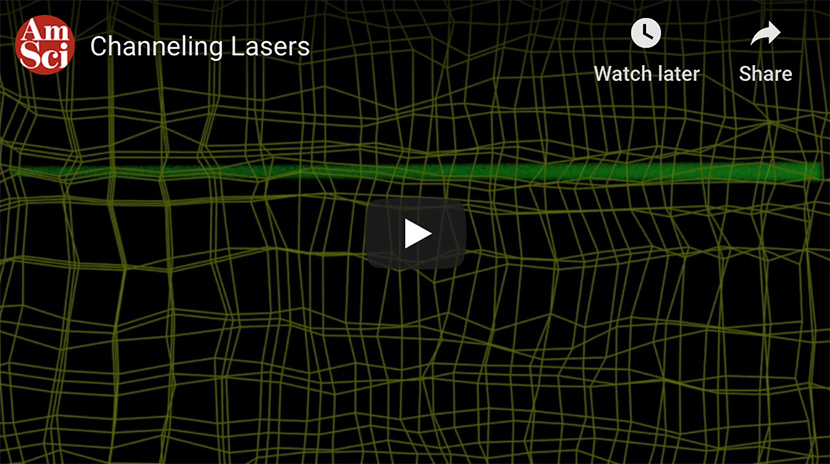 As the researchers describe in their recent paper in the Proceedings of the National Academy of Sciences the U.S.A., the laser light prompts the creation of a “self-induced optical fiber—that entraps the laser beam . . . and guides it through the medium without diverging.” Subsequently, when the laser is turned off, the spiropyran reverses its molecular transformation and the hydrogel expands within seconds, soaking up surrounding water (see schematic video above, seconds 6–end).

Previous research on these kinds of synthesized light-sensitive hydrogels has mostly focused on static responses under steady-state conditions. “Now we’re thinking about how to design materials so that they give you the desired dynamic responses,” says Anna Balazs, a chemical engineer at the University of Pittsburgh who worked with Saravanamuttu. The overall design goal, Balazs says, is “to design materials to do simple computational tasks.”

Initial tests for that computational capacity involved directing a second, parallel laser beam at the material. Researchers found that it could inhibit the passage of the first beam, be inhibited by the first beam, pass through along with the first beam, or cancel out the first beam. Those kinds of results may correspond to the basic building blocks of computational tasks—called logic gates—such as the Boolean functions AND, OR, and NOT.

“It’s important to distinguish this work from the very well established work on optical computing, where there is a focus on trying to mimic or to compete with digital computing,” Saravanamuttu says. Replacing wired circuits to make an all-optical laptop computer is not the goal, Balazs says, adding, “If you think about new discoveries, it’s not appropriate just to think about old applications.”

In addition to considering new applications, the discovery also has led to new questions, particularly because the two parallel laser beams interact—affecting one another’s transmission through the hydrogel—at greater separation distances than the researchers had expected. Understanding the reason why they still interact will be one subject of study in future work. 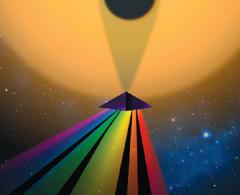