Domesticated species of plants and animals illustrate adaptation by means of artificial selection—that is, selection driven by human needs and preferences.

Our natural history museums contain a major blind spot. Some of the most extraordinary wonders of the living world simply cannot be found on display anywhere. They exist outside the consensus definition of natural history. Purebred chihuahuas? Pumpkins the size of small cars? Goats that produce spider silk? In a museum of natural history, more often than not, examples of domesticated species are relegated to dusty, long-term storage rooms deep in the basement. These postnatural specimens are commonly regarded as too boring to be presented to the public, and too insignificant to be studied seriously by field biologists. Domesticated species, by definition, have severed ties with the grand narrative of natural selection. They are instead the products of human-driven, or artificial, selection. 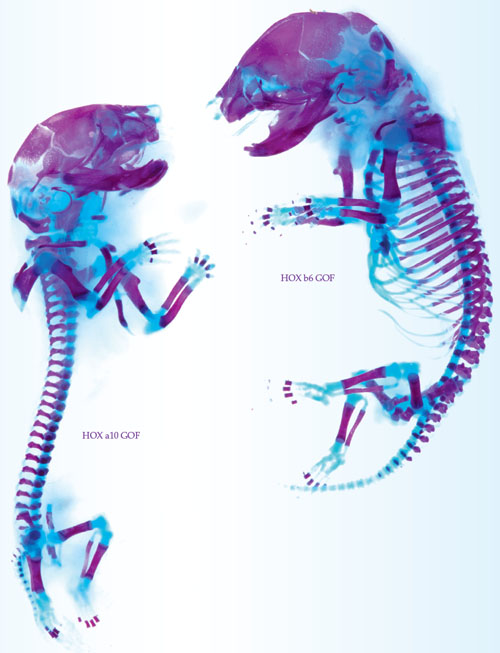 Animals and plants that have been raised in captivity have also left their native habitats. They are placeless. In the collection of the Smithsonian’s National Museum of Natural History, a single cabinet is reserved for rodent specimens that originated in laboratory settings. The cabinet is labeled simply “Locality Unknown.”

We came up with the idea for the Center for PostNatural History in 2005 while researching the field of synthetic biology, which views the living world as a set of reconfigurable biological machines whose genetic parts may be borrowed, hacked, and repurposed to serve new goals. In surveying the species that have received the most attention from synthetic biologists, we came to realize that the organisms most commonly used in science were absent from natural history collections. 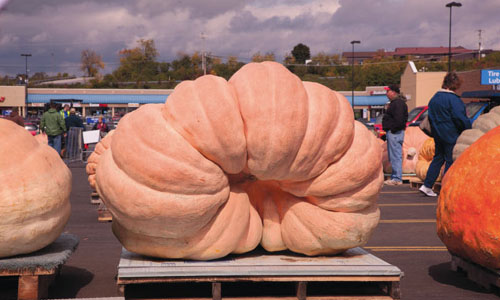 This insight led us to define “postnatural” to include the full range of living organisms that have been intentionally and heritably altered through processes such as domestication, selective breeding, genetic engineering, and synthetic biology. Unlike specimens in natural history collections, postnatural organisms like food crops, pets, and laboratory animals play an additional role as artifacts of the cultures that produce them. They are living embodiments of human desires and fears, heritably accumulated over time.

We can trace the beginning of postnatural history to the first species domesticated by humans: the ancestor of the modern dog (Canis lupus familiaris). Although the exact nature and timing of the initial collaboration between humans and dogs remains unclear, it is generally agreed that these two species began a mutually dependent relationship based on hunting sometime prior to 12,000 years ago. The beginnings of agriculture—that is, human control over plant reproduction in the form of seed saving—seem to have occurred a little later, about 11,000 years ago.

In most natural history settings, the domestication of dogs receives scant attention: The Museum für Naturkunde in Berlin, for example, has an extensive collection of domesticated dogs, acquired more than 90 years ago but never exhibited. In 2013, when the Center for PostNatural History curated “PostNatural Nature” at the Museum für Naturkunde, we brought these specimens out of storage for the first time and displayed them in a single long row, from shortest to tallest. This simple arrangement revealed one of the great stories lost from most natural history collections: as a result of artificial selection, domesticated dogs have the largest size range of any animal species on the planet. The Museum für Naturkunde, formerly reluctant to display these specimens at all, now proudly sends out the domesticated dog exhibit to other natural history museums. It is currently on display at Munich’s Deutsches Museum, in an exhibit titled “Welcome to the Anthropocene.” 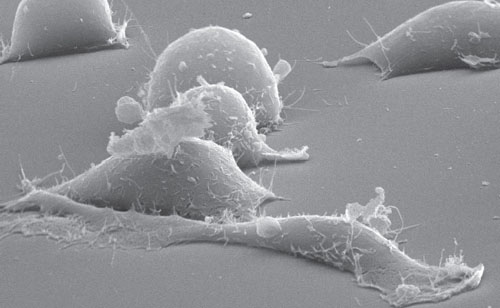 At the same time that early 20th-century natural history museums generally stopped cataloging new breeds created by humans, the number of these breeds was increasing. The newly understood Mendelian laws of heredity were essential to exploiting the variation in pattern and form that plant and animal breeders had been cultivating for generations. It is at this point that morphological changes in purebred dogs, for example, accelerated rapidly. With breeders agreeing on universal standards and selecting exclusively for signature traits, in an evolutionary blink of an eye, the shortened snout of pugs and English bulldogs became the absence of a snout, with the result that these breeds today commonly suffer from breathing problems.

All this new diversity of form was not lost on scientists. Since the Victorian era, mice and rats had been bred by hobbyist “fanciers” for purely aesthetic purposes, to exhibit unusual coat colors and patterns. This visible diversity in a single species offered geneticists a perfect toolkit to begin testing their ideas. The most ubiquitous laboratory mouse used in the world today, the inbred strain known as C57bl/6, originated from the hobbyist community. The original mouse was purchased by the founder of the Jackson Laboratory, geneticist Clarence Cook Little, from Abbie Lathrop, a hobbyist mouse breeder turned researcher. Today there are over 1,000 mutant and engineered variations on this mouse available for purchase in the Jackson Lab database; all of them descended from this common ancestor.

Throughout the 20th century, the tools of breeding and diversification flourished. Artificial insemination (most industrial livestock are now produced this way), induced mutation (for example, seedless oranges), and transgenics (such as herbicide-resistant crops) have increased the rate and range of genetic change for human purposes. 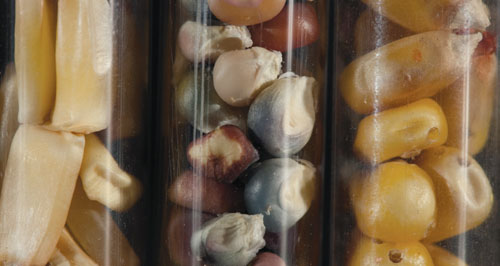 The needs of high-density industrial farming and high-throughput slaughter facilities place unique selection pressures on today’s farm animals. Chickens in the United States have been bred to grow larger, quadrupling in size since the 1950s, and at the same time they have been selected for complete physical uniformity. Industrial chickens are exquisitely adapted to the human-created habitat they now occupy, serving as repeatable and replaceable parts in the mechanized chicken nugget production process. Documenting these biological creations in the manner that natural history museums have archived the diversity of our living world up to now would require far greater capacity, resources, and interest than most farms and labs today possess. The aim of the Center for PostNatural History is to fill this niche.

Among the first specimens to be collected by the center was a set of transgenic mosquitoes (Aedes aegypti) from the lab of vector biologist Anthony James at the University of California–Irvine. The mosquitoes were modified in an attempt to render their digestive tract a less welcoming habitat for the virus that causes dengue fever. These particular mosquitoes are one of many concurrent attempts to address mosquito-born diseases through the use of genetic engineering. Test releases have been conducted in Brazil and the Cayman Islands, and a proposed release in Florida is pending federal approval at the time of this writing. Although federal law prohibits releasing genetically modified organisms into the “wild” without prior approval, the organisms cease to be the subject of regulation once they are dead and unable to reproduce. In this way, the traditional museum methods of specimen preservation gain a new function, allowing the public to see organisms that would otherwise be impossible to display. 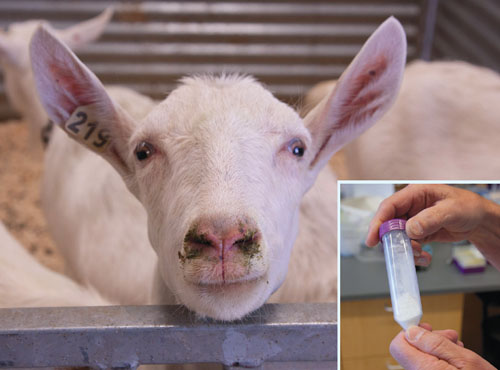 The Center for PostNatural History’s collection has grown to include postnatural organisms from all over the world, each with its own evolutionary and cultural origin story. The largest specimen collected to date is a taxidermied goat (Capra aegagrus hircus) named Freckles, the product of genetic engineering that enabled her to produce spider silk proteins in her milk. Randy Lewis, the molecular biologist who first isolated the genes responsible for spider silk, raises goats like Freckles on his experimental farm near Utah State University, in Logan. He and his assistants harvest the proteins from the milk of BioSteel™ goats like Freckles and spin them into super-strong fibers that could be used for bullet-proof materials, replacement tendons, and even super-strong fishing line. Freckles is the only taxidermied BioSteel™ goat on public display in the world.

Another highlight of our collection is a specimen of Escherichia coli bacteria that were genetically engineered to produce a pigment in response to light. The resulting plate of bacteria, preserved in acrylic, displays the famous output of any first computer programming attempt: “HELLO WORLD.” These early experiments in synthetic biology were carried out by researchers and students at the University of California San Francisco Voigt Lab and the Ellington Lab at the University of Texas, Austin, and published in Nature in 2005.

Other specimens in our collection include laboratory mice (Mus musculus domesticus), including several varieties of C57bl/6, donated by the Jackson Laboratory; a pair of genetically modified mouse embryos from the Instituto Gulbenkian lab of Moisés Mallo in Oeiras, Portugal, that have an altered version of the developmental HOX gene (one grew no ribs, the other too many); and a Silkie chicken (Gallus gallus domestica), a breed known for its malformed feathers, extra toes, blue skin, and black bones. The Silkie breed dates back at least to the time of Marco Polo. The Center for PostNatural History specimen vault contains over 100 specimens, along with a growing archive of related photographs, ephemera, and original publications.

The center’s collection and permanent exhibit space are in a business district in Pittsburgh, where a mixture of curious travelers, members of the public, students, and scientists visit weekly. Since most genetic alterations are not externally visible, our exhibits rely largely on storytelling. We make an effort to avoid using the language and narratives common to academia, industry, or activism. We use traditional display forms such as diorama to present an organism in its postnatural habitat: a specific laboratory, farm, or test site. The center also produces regionally specific traveling exhibitions, such as “PostNatural Organisms of the European Union,” which has been displayed in the Netherlands, Germany, and Slovenia, and will be on exhibit in 2015 in Barcelona, Spain. Although we have received enthusiastic support from other museums, we remain the only collection of our kind in the world.

Our ongoing research remains broad, with areas of focus including: songbird breeding; blood-sport such as rooster fighting; novel “morphs” created by amateur reptile breeders; the American eugenics movement of the early 20th century; the origins of mail-order Sea Monkeys™; biological warfare test sites; and the giant pumpkins of western Pennsylvania.

The single most common question that comes up at our museum is, “Is this good or bad?” We challenge our visitors to consider the nuances of human manipulation of the living world and leave with their own answers and new questions. Postnatural history is a vast realm intertwined with every human story of survival, catastrophe, seduction, and purging. Our main goal is to raise curiosity and awareness concerning our relationships with other forms of life on our planet—the kind of awareness that is often missing from the conventional museums of the living world.

Birth of the Coolth