A promising method of desalinating water has been designed. Many desalination techniques, such as reverse osmosis methods, are energy-intensive. A sieve could require less energy—but achieving such nanoscale, precise pores has been a challenge. Graphene is a carbon-based, ultrathin lattice noted for its durability. Graphene-oxide membranes have been developed to filter out nanoparticles, organic molecules, and larger salts, but filtering out common salts requires uniform pores smaller than 1 nanometer. Previous research showed that graphene-oxide membranes swell under water, which allows small salts through. Placing an epoxy resin on either side of the membrane prevents its expansion. Because the pores are about the size of a water molecule, the water chains together and moves faster through the sieve. The next step is to compare this device with other desalination techniques.

Researchers were able to extract ancient Neanderthal and Denisovan DNA by analyzing dust from five caves in Eurasia. Previously, DNA this old had been isolated from fossilized bones but not from sediment that might contain their genetic scraps. Researchers isolated the DNA from early humans by first scanning sequences for signs of degradation that indicated the samples were prehistoric. Then, they used molecular snares to capture only pieces of genes particular to the mitochondria of these hominins. Finding fossils is time-consuming, so searching for DNA in the sediment of places where hominins may have once lived is revolutionary.

A proposed dinosaur family tree accounts for more recent fossil discoveries as well as longstanding evolutionary puzzles. The conventional family tree, mostly unchallenged for 130 years, categorized dinosaurs by their hip shape and diet. Dinosaurs with birdlike hips were plant-eaters. The group with lizardlike hips was divided into a branch of herbivores and one of carnivores. The proposed family tree groups the carnivores with the bird-hipped dinosaurs, potentially explaining why birds are thought to have evolved from meat- eating dinosaurs, which had been considered distinct from the bird-hipped dinosaurs. Both meat-eating and bird-hipped dinosaurs are thought to have had feathers, but not the lizard-hipped ones. At the base of the new evolutionary tree are fossils found in the United Kingdom, which suggests that the first dinosaurs emerged farther north than once thought. However, early fossils are so sparse that this idea is debatable. Nevertheless, the new tree suggests paleontologists should search for such fossils in and around the United Kingdom. The proposed family tree will need confirmation before it gains acceptance.

A 40-year record of atmospheric carbon over Alaska indicates that the region has become a net source of carbon, despite the carbon dioxide stored via plant growth in boreal forests. Because the tundra now freezes later in the fall, processes that release the greenhouse gas, such as decomposition and plant respiration, are extended. The record shows that CO2 emissions during the months of October through December have increased by 73 percent since the 1970s. Climate scientists have warned that positive feedbacks such as carbon emissions from melting permafrost could further exacerbate climate change, despite the Arctic and near-Arctic having been important carbon sinks in the past. One question to study is how much of the CO2 being released now had been removed from the atmosphere decades or centuries ago. Even though the exact sources have yet to be specified, the dramatic increase in emissions necessitates attention. The Arctic has been warming at double the rate observed elsewhere.

Commane, R., et al. Carbon dioxide sources from Alaska driven by increasing early winter respiration from Arctic tundra. Proceedings of the National Academy of Science of the U.S.A. doi:10.1073/pnas.1618567114 (May 8)

Analysis of the mineral grains from the oldest rocks indicates that 4.4 billion years ago, land on Earth was flat and almost entirely covered with water. The research indicates that zircon mineral grains from Australia that date to when Earth was 160 million years old were formed by melting old igneous rocks rather than melting sediments, which would have suggested that major continental collisions had occurred. This result supports the theory that the extreme conditions of Earth’s earliest days were followed by a cool, quiet stage.

The latest addition to the hominin family tree, Homo naledi, has been dated to the late Middle Pleistocene, 335,000 to 236,000 years ago, which means it could have mingled with Homo sapiens. Phylogenetic analyses had suggested that H. naledi’s mixture of ancestral and derived traits indicated it lived as early as 900,000 years ago. But this study confirms the Middle Pleistocene dating with six independent methods using chemical aging techniques of both the bones and the surrounding sediment. 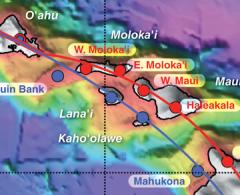