Studying the Light of the Eclipse

Solar eclipses offer rare opportunities to better understand both the Sun's corona and the Earth's atmosphere.

Solar eclipses, like the one crossing the United States on August 21, have long been rare opportunities for scientists to explore phenomena that are usually obscured by the Sun’s brightness. For example, the solar corona, the glowing aura of plasma that surrounds the Sun, is easily viewed even with the naked eye during an eclipse, and such events have long been an ideal chance to study the corona in detail. As another example of fundamental importance, the May 29, 1919 solar eclipse that passed over South America and Africa was used to test a prediction of Einstein’s then-unproven general theory of relativity. Einstein predicted that starlight passing close to the Sun would be deflected by the Sun’s gravitational field by a very precise amount; typically, though, that starlight is impossible to see in the Sun’s brightness. Astronomer and physicist Sir Arthur Eddington traveled to the island of Principe off the coast of Africa for the eclipse, and his photographs verified Einstein’s prediction and played a key role in the acceptance of the general theory of relativity. 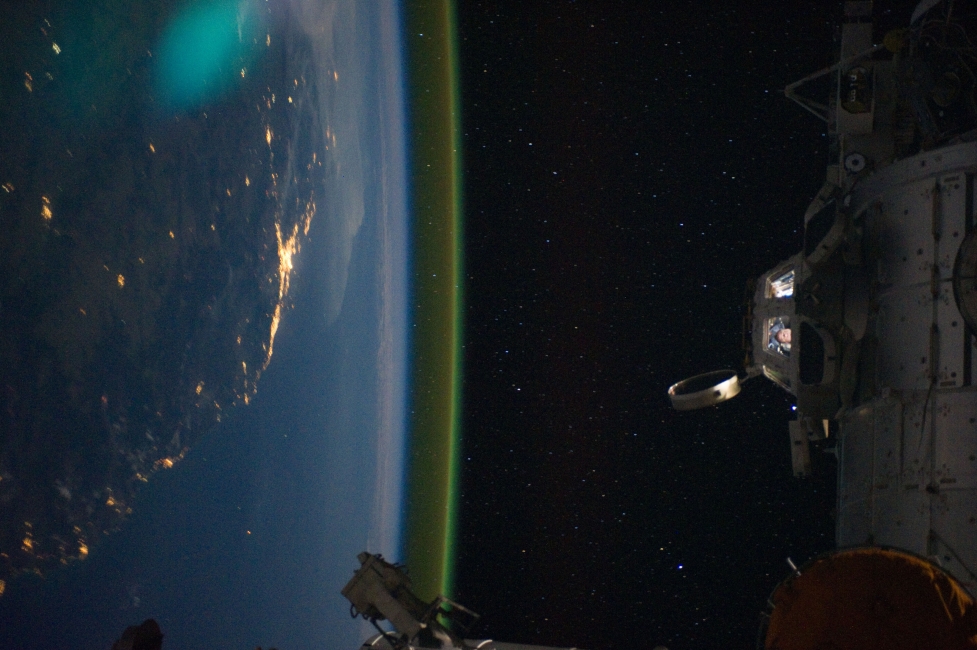 Though eclipses are most famous for the lack of light present in the sky, some physicists have used eclipses to study the nature of the light that remains. The physics of light propagation and scattering in the atmosphere can be quite complicated, and the darkness of an eclipse can provide an opportunity to see subtle effects that are normally hidden.

The history of such experiments arguably goes back to observations of the famous Dr. Edmund Halley (yes, the one the comet is named after) of the solar eclipse that occurred on May 3, 1715 over England. Realizing that such an event was a rare opportunity for science at the time, Halley undertook what can only be considered a very early effort at citizen science, enlisting the general public in making timing measurements. As he described in a paper to the Royal Society:

The Novelty of the thing being likely to excite a general Curiosity, and having found, by comparing what had been formerly observed of Solar Eclipses, that the whole Shadow would fall upon England, I thought it a very proper Opportunity to get the Dimensions of the Shade ascertained by Observation; and accordingly I caused a small Map of England, describing the Track and Bounds thereof, to be dispersed all over the Kingdom, with a Request to the Curious to observe what they could about it, but more especially to note the Time of Continuance of total Darkness, as requiring no other Instrument than a Pendulum Clock with which most Persons are furnish’d, and as being determinable with the utmost Exactness, by reason of the momentaneous Occultation and Emersion of the luminous Edge of the Sun, whose least part makes Day. Nor has this Advertisement failed of the desired Effect, for the Heavens having proved generally favourable, we have received from so many Places so good Accounts, that they fully answer all our Expectations, and are sufficient to establish several of the Elements of the Calculus of Eclipses, so as for the future we may more securely rely on our Predictions; though it must be granted, that in this our Astronomy has lost no Credit.

One of the striking observations that Halley made, from the House of the Royal Society, was that the color of the sky changes during an eclipse:

From this time the Eclipse advanced, and by Nine of the Clock was about Ten Digits, when the Face and Colour of the Sky began to change from perfect serene azure blew, to a more dusky livid Colour having an eye of Purple intermixt, and grew darker and darker till the total Immersion of the Sun….

But was the color of the sky truly changing, or was it an illusion created by changing lighting conditions and the quirks of the human eye? The famed optical scientist Lord Rayleigh made some limited measurements of the spectrum, or color, of skylight during an eclipse in 1927, but it was not until the 1960s that a number of research groups attempted to make quantitative measurements to verify exactly how much color change occurs. One experiment was done during the eclipse of the July 20, 1963, by Sharp, Lloyd, and Silverman. From an observation site in Hermon, Maine, they made measurements of the spectrum of the sky before and during the eclipse. They indeed found that the spectrum of the skylight shifts towards blue, thus appearing more purple to the human eye, as Halley observed.

But why does the color change? It is well known, thanks to the aforementioned Lord Rayleigh, that the daytime sky is blue because of sunlight scattering off molecules in the atmosphere. One can show through straightforward calculations that blue light is scattered more strongly than red. During ordinary days, most of the light gets scattered once in the journey from the Sun to the eye. During an eclipse, however, one can also see light that has been scattered multiple times before reaching the eye, and each scattering event is more favorable to blue light, pushing the overall spectrum to blue. Thus the purple appearance of the sky during an eclipse is due to different light scattering processes becoming more significant.

The overall color isn’t the only phenomenon of interest in skylight, however. We often think of the atmosphere as a somewhat passive environment, filled with molecules that act more or less like billiard balls bouncing around against each other. However, chemical reactions are constantly occurring in the atmosphere, with energy provided by the Sun and cosmic radiation. Many of these reactions produce light, and the result is known as airglow (as shown above), a constant and often visible faint glow of the atmosphere.

The airglow can be readily measured at night, but is obviously not easily seen during the day. Are there differences in the chemical reactions, and therefore the composition of the airglow, during the day? An eclipse provides a perfect opportunity to find out, as the Sun is effectively “switched off,” presumably leaving daytime airglow behind and readily visible.

J. F. Noxon and T. P. Markham used the same July 20, 1963 eclipse mentioned above to make airglow measurements. But instead of making ground-based measurements, they observed the eclipse in an Air Force jet flying at 44,000 feet along the path of totality. They observed a number of new features in the airglow spectrum during the eclipse, but were unable to draw definite conclusions as to their origins.

Quite a few measurements of the spectral properties of the sky during eclipses were done during the 1960s and 1970s, at a variety of places around the world. In the 1970s, though, researchers started focusing on yet one more property of skylight that can change during an eclipse: the polarization of light.

In experiments, light is often tailored to be linearly or circularly polarized. Most natural light sources produce unpolarized light, in which it rapidly and randomly changes the direction it oscillates. Light coming from the Sun is unpolarized, and one would naturally assume that the light of the sky during the day is also unpolarized—however, this is incorrect, as the following video shows. 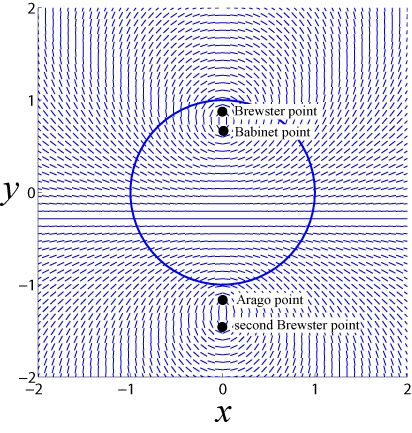 There are four “special” points in the sky which possess no direction of polarization, as illustrated in the figure. At these locations the light is in fact circularly polarized. As the figure above suggests, it is generally not possible to see all four of these neutral points at one time, though they were all measured from a hot air balloon a few years ago. It was natural to ask whether the neutral points change during an eclipse, and in 1999 a Hungarian research group investigated this question during the August 11 eclipse that passed over that country. The results they found were quite complicated, but definitely showed a significant change in the polarization of the sky during an eclipse.

One might ask, about all of these measurements, “What are they good for?” This is one of those situations where the experiments seem to have been motivated almost entirely by a physical curiosity. But they are an excellent illustration of how many subtle and nontrivial physical phenomena can be hidden in even seemingly simple events. If you see the eclipse, keep that in mind—and be sure to see if the sky looks purple to you!