Proponents could have demonstrated the apolitical nature of their claim if they had debunked the Chinese lab myth using their methods. Instead, they have doubled down against Darwin.

The COVID-19 pandemic could have been a crowning moment for intelligent design, but instead the crisis has really revealed its ultimate irrelevance. With some U.S. political leaders speculating that the novel coronavirus was created in a Chinese lab, a way to prove whether this claim is true or false would seem to be just what is needed at this time. Intelligent design’s advocates claim that through analysis of the genetic information encoded in the DNA of living species, one can determine whether an organism arose through the process of natural variation and selection or whether it was the product of intentional design by some deliberate creator. Here at last is an opportunity to demonstrate the usefulness of an intelligent design theory in molecular biology without any of the supernatural, legalistic, or culture-war baggage that have embroiled the idea for the past 30 years.

And yet, intelligent design advocates have largely missed the call. Perhaps more importantly, political leaders who supported intelligent design when considering science education issues forgot about it entirely when addressing the pandemic.

The idea that the novel coronavirus SARS-CoV-2 was intentionally designed in China—and either escaped unintentionally or was released as a deliberate bioweapon—has been suggested by the U.S. President, U.S. Secretary of State Pompeo, and members of the U.S. Senate. According to a Pew Research survey in April, 23 percent of American adults believed that the coronavirus was intentionally made in a Chinese lab, and another 6 percent believed it was made in a lab by mistake. This claim has been debunked by a number of scientists and intelligence analysts (including in this blog’s March 2020 post by epidemiologist Jessie Abbate). It’s both biologically and diplomatically unlikely that a virus that has these effects and transmission patterns would be weaponized and released in such a fashion. Nonetheless, this conspiracy theory persists along with a range of other misinformation about the pandemic (see Brian Southwell’s post on COVID-19 misinformation). 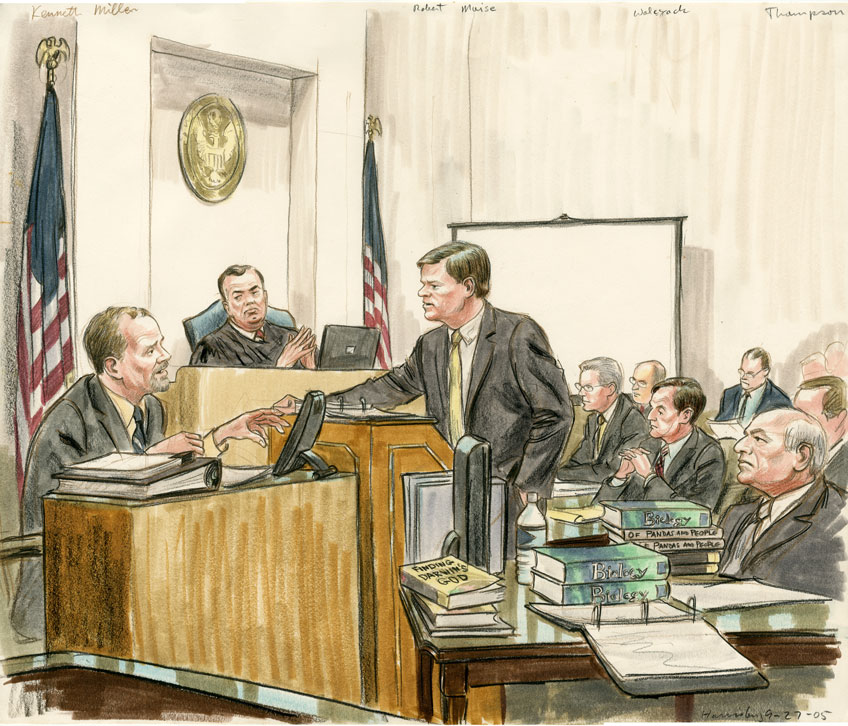 These claims and rumors have serious foreign policy implications, as well as domestic political ones in the United States. The suggestion that the virus was a deliberate (or unintentional) bioweapon is sometimes elided with valid criticism of China’s communication and response to the initial outbreak to strengthen efforts to blame the Asian country for the global pandemic. Indeed the question of financial demands for these alleged damages has been broached in right-wing media outlets. And rumors and suggestions that China can and should be blamed for the pandemic have resulted in a sharp rise in hate crimes directed at Asian Americans.

This moment could be where intelligent design saves the day. In 1996, biochemist Michael Behe first introduced the concept of “irreducible complexity.” This concept suggests that a biological system could not have emerged naturally if there’s no evolutionary benefit to each of the intermediate steps between a precursor and the organism in question.

In his most famous book, Darwin’s Black Box (1996) Behe attempted to illustrate the concept of irreducible complexity through examples such as the bacterial flagellum and the hemoglobin molecule. In both these cases, Behe argues that biological evolution—the principles of natural selection developed by Charles Darwin in On the Origin of Species (1859) and further developed for more than 150 years—is insufficient to explain the origins of complex biomechanical functions. From this negative argument (that evolution is insufficient), Behe offers a different claim: that an intelligent designer guided the origins of these structures.

In its arguments, intelligent design is substantively different from other forms of creationism. In practice however, intelligent design quickly became used in popular discourse as a secular-sounding proxy for creationism. Fifteen years ago, a federal court in Pennsylvania ruled that a school board that sought to expose students to intelligent design were promoting a religious view, in part because the texts and understandings of intelligent design that they used treated the term as interchangeable with Biblical creation. The judge in that Kitzmiller v. Dover Area School Board ruling also held that (independent of how people perceived or used the theory) intelligent design’s appeal to nonnatural explanations or supernatural creators is not scientific. (Anthropologist Pat Lee Shipman wrote about this court case in 2005.)

After the Dover ruling, popular interest diminished in using intelligent design as a challenge to schools teaching evolution. Antievolutionists have largely turned to laws and regulations that redefine or reinterpret the scope of free speech or religious freedom rather than prescribing a specific alternative that courts might accept as science. (The Supreme Court ruling on a case involving religious schools in Montana on June 30 illustrates how the place for religion in publicly funded education may be expanding.) Intelligent design advocates, particularly the Seattle-based Discovery Institute’s Center for Science and Culture, continue to spread their message, and their work continues to serve as a resource for people who reject evolution or who oppose its presence in schools. But their audience has shifted away from the legal and political arena to presenting itself as a resource for teachers, parents, and school board members directly.

Given that target audience, it’s not surprising that the Discovery Institute’s blog has several posts over the past few months related to the novel coronavirus. But none of these address the question of whether the tools of their research can provide evidence for or against the accusation that a Chinese laboratory intelligently designed SARS-CoV-2. In March, Michael Behe wrote that although he believes that viruses in general are the products of intelligent design, the emergence of the coronavirus that causes COVID-19 was an act of random evolution. “Viral mutations can change the shape of the skeleton key at random. Most of the time the process doesn’t work but, every once in a while, the virus hits the jackpot.” Several scientists have been studying possible evolutionary pathways for the virus, but Behe seems to miss an opportunity to demonstrate that intelligent design theory shows how those pathways are not irreducibly complex. Behe’s discussion of the evolution of coronaviruses and explanation for why COVID-19 became so widespread does not sound very different from other science communication on the topic—once past his claim that nothing in biology makes sense except in the light of intelligent design.

Other Discovery Institute writers have taken different approaches to discussing the pandemic. Writing for the Institute’s Evolution News blog, Michael Egnor asserts that the occurrence of COVID-19 is proof that natural selection is a degenerative theory, only capable of causing destruction and reduction to complex life. Overall the message from the Discovery Institute seems to be one that suggests that the SARS-CoV-2 virus is not a product of intelligent design, but that this origin further proves that evolution is harmful, whereas intelligent design is providential. Presented with an opportunity to use intelligent design to debunk a dangerous conspiracy theory, intelligent design advocates instead invoke the virus to defend the American free-market healthcare system and to deplore the closure of churches as part of public health measures. Aside from Behe, the response from other Discovery Institute authors has largely been to simply add COVID-19 into existing conservative talking points about international relations, healthcare, culture, and economics (with the occasional dig at Darwin.)

Perhaps ironically, the intelligent design movement has been caught up in a fixation with its own origins. The movement was crafted around a legalistic challenge to the teaching of evolution, beholden to a movement that has continuity going back a century. The intelligent design iteration of antievolutionism came into being aligned with a suite of other culture war issues that has typified American politics since the late 20th century. The coronavirus presented an opportunity to demonstrate a practical application of intelligent design, one that it could credibly say was aligned with its work all along. How better to demonstrate its own apolitical nature than to apply its scientific process to debunk the Chinese lab myth—even if, perhaps especially if, the conclusion is one that may be politically unwelcome by some of intelligent design’s original supporters?

When Vice President Mike Pence was a Congressman for Indiana, he was an outspoken supporter of intelligent design, calling it the only “remotely rational explanation for the known universe.” Pence’s own conflation of the term intelligent design with protestations that “the Bible tells us that God created man in his own image” may be an indication that the Vice President himself sees intelligent design as little more than a politically correct term for creationism. Yet it’s most telling that since his appointment as the head of the administration’s coronavirus task force, there has been no indication that the government has looked to intelligent design research nor consulted any intelligent design–favoring scientists to address the pandemic. In his role as Secretary of State, Pompeo has been quite vocal about his evangelical Christian beliefs, although he’s made no explicit mention about how that has shaped his views on evolution or design. On May 4, National Institute of Allergy and Infectious Diseases Director Anthony Fauci gave an interview in which he stated: “A number of very qualified evolutionary biologists have said that everything about the stepwise evolution over time strongly indicates that it [the SARS-CoV-2 virus] evolved in nature and then jumped species.” Media observers have noticed that Fauci has been less available for public comment since early May, but it seems a stretch to conclude that this is because Fauci appealed to evolutionary biologists to explain why the Chinese lab claims were false.