COVID-19, Campus Closures, and the Rise of the #VirtualDefense

A thesis defense usually includes a now-banned large public gathering on a university campus. Here’s how students are adapting.

For graduate students, a thesis defense, which consists of the student presenting their research to the broader university community in a classroom, is many things. It’s the end of a long, sometimes stressful educational journey, the proverbial light at the end of the tunnel of graduate school. It’s a chance to show their friends and family what they’ve been working on so hard for so long, and then celebrate a major professional milestone with loved ones. Some graduate students consider their defense to be the moment when they successfully become a doctor, or when they graduate. Many consider the successful completion of their defense, and the applause they receive from colleagues, friends, and family, to be one of the happiest moments of their lives.

However, whatever else it may represent, a thesis defense is a large public gathering held on a university campus—and during the COVID-19 pandemic, campuses are closed and large public gatherings are restricted. Some students are simply choosing to delay their defenses until all this craziness settles down and some normalcy returns. But other students would prefer to finish graduate school and get on with their lives and careers—some have jobs lined up pending the completion of a defense and don’t want to delay for another semester (or longer), others have been looking forward to being done for so long that the thought of an indefinite delay is extremely stressful. To keep everyone safe and still allow students who want to finish to defend, the thesis defense has been moving online. 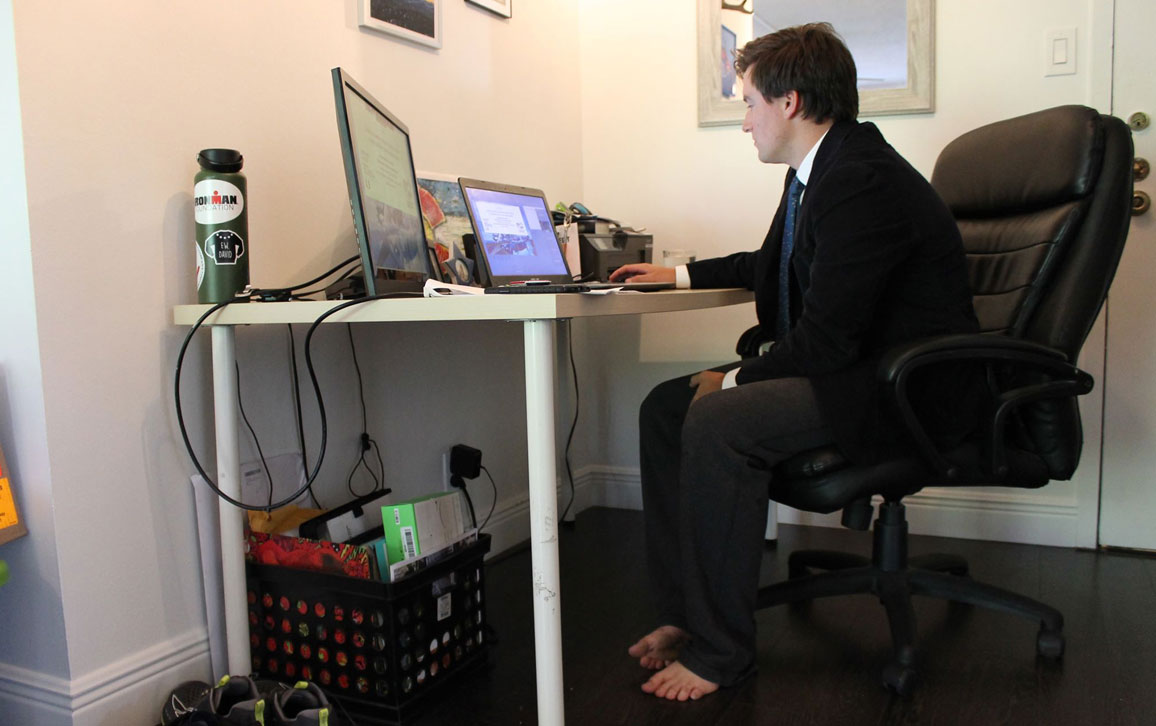 Every institution has its own rituals and traditions for a thesis defense, but the pandemic has thrown many of these rites of passage out the window. “Our department graduate committee voted that we must allow virtual defenses, and the setup of those defenses would be left to the student and his or her advisor,” said Andrew Mahon, a professor in Central Michigan University’s biology department. “Our guidelines were to be as flexible as needed so that the student could defend while still following the rules required for the degree.”

Some institutions have long required an in-person public defense as a graduation requirement. (When I asked why, I was told it was a combination of tradition and demonstrating that a student is able to defend their work to other scientists beyond their committee.) However, some institutions, such as the University of North Carolina at Chapel Hill, already allowed virtual defenses, according to Sarah Jacobson, the UNC graduate school’s assistant dean for enrolled student services. These rules were in place partially because many UNC graduate students do their research at the Institute of Marine Sciences (IMS), a coastal field station in North Carolina’s outer banks that’s a few hours drive from main campus—virtual defenses allowed students to present to the main campus biology department and the field station simultaneously. “Typically, about half the audience of a given seminar or defense is in the room at IMS, and the other half is watching remotely, so overall I felt like the actual viewing experience was no different than I’m used to,” said Mollie Yacano, a PhD student at UNC-IMS who has been watching her classmates defend online the past few weeks. Mollie noted that the experience was different for those giving the talks even if it wasn’t different for those watching, and that she misses the opportunity to celebrate with classmates who successfully defend. 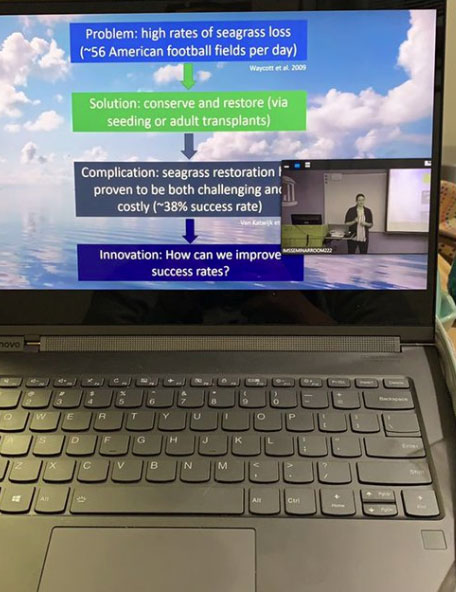 The experience with virtually linking two campuses is perhaps why UNC-IMS graduate students have been so prevalent on the #VirtualDefense twitter hashtag, which allows soon-to-defend students to advertise their talks and seek advice on how to prepare for this unusual format of talk. Such advice is critical, because students don’t often get much time to prepare for this change. “I learned I would be defending remotely a few days before my defense, but there was doubt if I’d be allowed to enter the classroom until the day before,” Sarah Donaher, a recently-graduated Masters student at UNC-IMS told me, noting that unlike some other students who defended from home, Sarah and two of her thesis committee members were in a mostly-empty UNC classroom, broadcasting the talk to a virtual audience watching from their homes.

Other than stress caused by an abrupt shift in plans, a #VirtualDefense can pose other challenges, including technical difficulties—no one wants to be troubleshooting teleconference software in the middle of giving one of the most stressful talks of their life! Additionally, many students find a room full of friendly faces reassuring and encouraging, and the loss of that feedback when they just speak to their webcams from their homes can be unsettling or distracting. One student even reported that their defense was “Zoom-bombed,” temporarily taken over by a troll who shouted awful things until the organizer could expel him from the Zoom session.

But for the most part, the students, faculty, and administrators who I spoke to all reported a desire to be flexible, to help make it work the best we can in these unusual times. Jacobson even reported an administrative rule change that I found shocking, having once spent three stressful days hitting “reload” on Canada Post’s package tracking website to see when a form I needed a committee member to sign arrived at his home during a blizzard: Committee members were allowed to sign off on a successful defense via e-mail! “We in the science community are all here for the students,” Mahon told me. “We faculty just need to adapt and realize that these are in different times.”

I asked students who defended virtually for their advice to others considering this option. In addition to various software settings and technological advice that you can find on the #VirtualDefense hashtag, Donaher had two important things to share. “The most helpful piece of advice I received was that it’s ok to be upset,” she told me. “When I initially learned I was going to defend remotely I was very distracted and unsettled, but I felt so silly for feeling this way when the people around me were forced to cancel weddings, were losing their jobs, etc. But finally I read some advice that said it was totally alright and expected to grieve the loss of this huge milestone that you work years for, and that really helped me accept it. The other big piece of advice to people who have friends or family defending is to make sure you plan some sort of virtual celebration immediately after for them. I was dreading the aftermath of my defense far more than the defense itself because I was so worried about going back to an empty apartment and being alone on what was supposed to be a special day.”

The COVID-19 pandemic is disrupting life as we know it on a massive scale. I, for one, find it a little comforting that academics are being flexible enough in rules and expectations to allow one aspect of professional life to adapt and continue, despite the circumstances.