A lack of enforced environmental regulations affects not only climate, but cultural heritage and solar energy production.

There are plenty of places around the Earth that have become cooler, even though average global temperatures have been rising. One of those places is the southeastern United States. The reason, says Mike Bergin, a professor of civil and environmental engineering at Duke University, is "a blanket of haze," which prevents some of the Sun's energy from reaching our planet's surface. 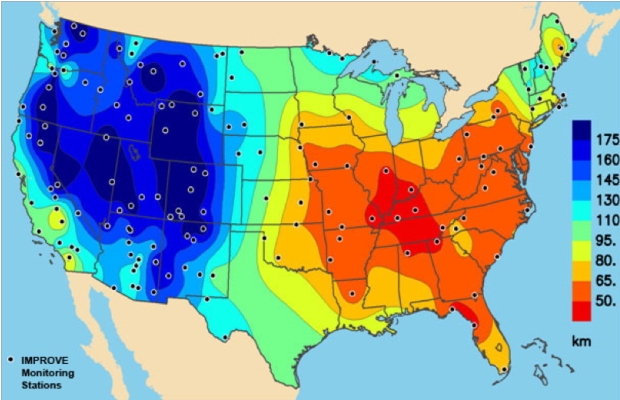 Why does the southeastern United States have so much haze compared to the rest of the country? In his talk at the Research Triangle Park chapter of Sigma Xi (American Scientist is published by Sigma Xi), Bergin identified natural factors—the wind generally blows from West to East across the United States—and human activities, including coal-burning power plants as well as the greater numbers of people and private vehicles traveling more miles than in other areas of the country.

Although that haze brought a cooling effect to the southeastern United States over the past hundred years, the effect is coming to an end. Bergin says that's because the past few decades of environmental regulations on power plants and vehicles have significantly decreased pollutants, clearing the air.

In countries that lack such environmental regulations—or the enforcement of those already on the books—the pollution is also causing serious public health concerns and is curtailing both agriculture and solar energy production, including from the deposition of particulate matter directly on to leaves (inhibiting photosynthesis) and on to solar cells. In one study, Bergin estimates between 17 percent to 25 percent of solar energy production is lost in regions with high amounts of particulate matter, which accounts for US$10 billion per year lost in China and US$1 billion per year lost in India.

Although having sampled the air and particulate matter in his travels around the world—including to China, India, Bolivia, and Iran—Bergin was perhaps most excited during his talk about a project that involves area high schools. He's working with students to construct, program, and deploy inexpensive air-quality monitors so they can perform their own data collection and analysis. What they're finding so far confirms what you'd expect:  The air, at least outside, is pretty dirty.