A Big Cover for "Big Data Takes On The Universe"

From The Staff Art Astronomy Photography

On the front cover of American Scientist there's an image that usually represents a particular feature article. That changed with our first special issue in over two generations: Dedicated to big data and astrophysics, the September–October 2018 special issue presented a unique artistic challenge of representing the whole magazine with one image. Our art director, Barbara Aulicino, has previously written about the  voodoo involved in creating a cover. This time, she says, it was a highly collaborative visual conversation. In that spirit, we had a highly collaborative verbal conversation about the unexpected sources of inspiration, experimentation, and the "Aha!" moment in making it.

When you first learned about this special issue, what information did you gather—or receive—to prompt your creative process?

I first just heard it was going to be about big data, cosmology, astrophysics—pretty abstract concepts to illustrate on a cover—so I didn't know where to take it. Because my process with covers is keying from a particular article, and I didn't have any articles to start working from, it was wide open. Staring at a blank wall was definitely part of the process. Then I started talking with the editors, who had some concrete ideas, but it's just hard to think about how to combine the concepts—big data and astronomy—visually.

Well, some of those concrete ideas included old subway maps, infographics, pictures of galaxies, and I first started pursuing the idea of a galaxy made from data wires circling around to represent a galaxy.

I know New Yorkers love their subways, and several of our editors have a New York connection, as do you, but is that it? How on Earth did subway maps come up?

I think it was just the imagery—thinking of lines of data and things connecting and having destinations—something that looked a bit complicated with crisscrossing tunnels but was also iconic. And it was from that idea that I started sketching.

To make it look really iconic, I wanted to do it in Adobe Illustrator. That was going to make it a complex task, and I realized I didn't have the time, so I thought, "Well, I'd better hire somebody." And there was a lot of back and forth with [illustrator] Tom Dunne, who always has great ideas and is very willing to do revisions — we have a long history of working together on projects like this. He did some early versions in Illustrator combined with Photoshop-manipulated galaxy images, including one version with a hand-drawn galaxy (below, center) because he also recognized to do it entirely in Illustrator would be very time-consuming.

Eventually, you ended up going in a different direction. How so?

In talking with Tom, I guess first it was the question whether either of us could figure out how to create a clean Illustrator image of the concept. If we could, then would the time spent on experimenting be worth the effort? I think that’s when we veered off in another direction. Tom took the subway map imagery to use as a metaphor for data leading to and from destinations in an actual image of a galaxy.

That concept was appealing. I mean, why create a galaxy out of wires when images of galaxies are so beautiful? So we explored that with wires—like in a circuit board—stopping at particular, interesting spots on a galaxy. It was like the wires were subway lines stopping at destinations. But at first it wasn't really making a connection between data and astronomy.

Was there an "Aha!" moment or was it just an iterative process—how did you get to pixelating the image of the galaxy?

At first, one editor suggested manipulating the galaxy images with filters because astronomers do that (see "Photoshopping the Universe"), and so we had several images of that. Then, the germ of a pixelating idea came from another editor because of how we, or rather, astronomers, first saw Pluto—or really any far-off object—as pixelated. The closer NASA's New Horizon mission got to Pluto (see "Journey to the Solar System's Third Zone"), the better we saw Pluto's surface and the less pixelated it became. We then spread out all the images that we'd generated or found and started putting things together. I was just thinking visually at that time, and it didn't strike us until later that a computer would see a galaxy as pixelated, no matter how much resolution there was. So the "Aha!" kind of came after we put a pixelated galaxy together with the data wires.

So now we had a new direction to explore, but time was running out, and we still hadn’t nailed down a viable concept. I wasn’t sure how much more experimentation it was going to take to arrive at a special issue–worthy cover. It was then that I decided to play with the pixelation idea myself to see if I could make something work. I talked to Tom about wanting to continue the design and illustration process on my own because of the time factor, and he was fine with a shared credit for the end result.

Fortunately, it was very easy to find many tutorials for how to pixelate an image and still have it be usable for printing on a magazine cover. I began experimenting and it was really fun! After that, it was just a matter of picking the right image and then fine-tuning the right amount of pixelation so that it would work with the font, convey the idea of data, and still be recognizable as a galaxy. And once the editors saw this they liked it.

Which galaxy did you select to pixelate and why?

It's the famous pinwheel galaxy (Messier 101), but it took some experimentation before we settled on it. We needed an image that was bright enough, but not too bright so that it wouldn't compete too much with the brightness of the wires or the type. We ultimately ended up with pixel sizes that pretty well matched the ends of the wires coming up to capture the data, so that the wires look connected to the galaxy—the data—underneath it. 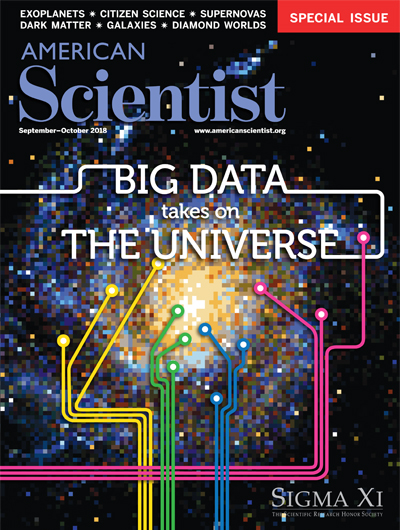 I noticed the wires cross one another. That gives the image more depth, but isn't like a circuit board.

This wasn't meant to be that literal. Call it artistic license. At one point, I disagreed with one of the editors who thought one of the wires shouldn't overlap the cover line text, and that one of the data nodes should land in the center of the galaxy. And I said I don't think we have to be that literal and decided not to make the suggested changes. Instead I moved the overlapping node behind the "U," and made the right-most node cross in front to create more depth, which better helps the wires look like they are connected to the galaxy image.

Are you satisfied—is this artwork done—or is it done just because the deadline has passed?

I do sometimes think back to the original idea of the circuits coming together and creating a galaxy and I'm thinking that might be fun to do if I had some time, just to see how it would turn out. But that's a different project. [Laughing]

I'm satisfied with this. It's exactly what we wanted it to do: represent the whole magazine and catch people's eyes, and a lot of people have told me that it has.

Our September–October 2018 special issue on big data and astrophysics is now on sale—look for it to catch your eye in the science section of a newsstand near you.