Where Art and Science Meet

Collaborating to bring long-extinct species to life on the page

Australian artist Peter Trusler has a talent for portraying long-extinct creatures and the landscapes in which they lived in ways consistent with the best scientific evidence. His engrossing illustrations have appeared in books, scientific exhibitions, popular publications, even on Australian postage stamps. For more than 30 years Trusler also has collaborated with Patricia Vickers-Rich, professor of paleontology and founding director of the Monash Science Centre at Monash University, and her husband, Thomas H. Rich, senior curator of vertebrate paleontology at Museum Victoria. In the The Artist and the Scientists: Bringing Prehistory to Life (Cambridge University Press, 2010)—excerpted below—Trusler, Vickers-Rich and Rich explore the fertile opportunities for provocation, when established ideas are challenged, and for education when meticulous art and science connect. 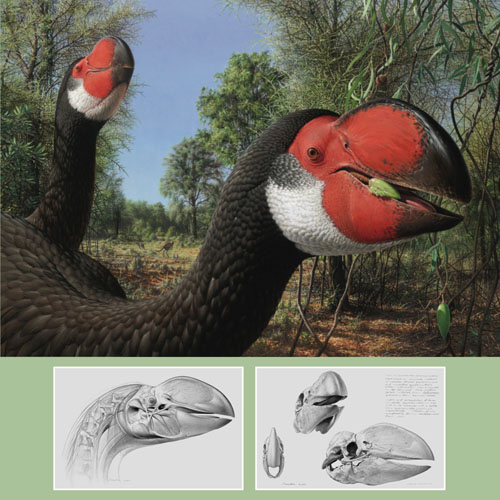 Peter Trusler: “With respect to art in general, Pablo Picasso is reported to have exclaimed that photography had thankfully released us from those shackles of realistic representation. So true, but for all major advances there is a frame of reference, or a point of relativity, beyond which this may not hold. Regrettably, something is often lost when another thing is gained. I often bear this cliché in mind. In circumstances where I have the opportunity to compare a well presented, old lithographic drawing of a specimen with an equivalent photograph, I have found that, contrary to popular opinion, the drawing can be superior....

“[A] drawing is a complex synthesis of information, which embodies a hierarchy of decisions. It contains a system of weighted emphases that can filter out extraneous or irrelevant information. Drawings deal with surfaces, form and content and matters of understanding, for they are time intensive. Drawings are expressions that embody research and development. They are never bland, factual presentations, no matter how simple or realistic they may appear. The specimen’s image has been considered, and not shot! One can, therefore, read the mind of the individual who rendered it. This is not to say that an astute photographer cannot effect many of the same processes with skillful camera technique …

“The intrinsic difference for me … is one of cognition.”

Patricia Vickers-Rich and Thomas H. Rich: “The association and friendship between the three of us spans more than three decades. It began when we two scientists were on the hunt for an artist who had the skills that would allow precise scientific information to be conveyed in imagery alongside the detailed scientific descriptions of the ancient marsupial, Diprotodon. The condition of the specimens to be ‘presented,’ to both the general public and to other researchers, was incomplete. What we needed was an artist able to synthesize images that combined these fragments and information from various disciplines. The images required a three-dimensional quality that drew observers in, communicating to them intimate details of anatomical form. But, more than just revealing the essence of the scientific descriptions, these images needed to challenge the viewer to ask more questions … .

“We have, through our work together, continued to find each other’s different perspectives and approaches informative. We have been able to disagree, challenge each other and spend long hours discussing the direction of each of the projects highlighted within these chapters. We have enjoyed exploring new territory—new techniques, novel materials and subjects … . [T]hroughout our work together, we have respected each other’s independence ...”