Turning the Lights Down Low at Galaxy M51

The Whirlpool Galaxy—or spiral galaxy M51 in astronomical parlance—is a favorite for telescope observations, with good reason. At only 30 million light-years away, it is close enough to be visible in good detail from the Hubble Space Telescope orbiting above Earth’s distorting atmosphere. Also, it is oriented so that its well-defined spiral is fully visible from Earth. Earlier this year, astronomers unveiled two mosaic images at an American Astronomical Society meeting that improve our view of M51. The top of the two photographs posted below is the best visible-light image to date of the galaxy. The second, made possible after comparing the first image to near-infrared observations, is the most detailed depiction yet of the galaxy’s dust structure. Michael Regan, an astronomer at the Space Telescope Science Institute in Baltimore, Maryland, explained the process to American Scientist associate editor Catherine Clabby.

A. S. How did your team make these images?

M. R. The visible-light image is a mosaic of images made with Hubble’s Advanced Camera for Surveys (ACS). The dust image was made by comparing the ACS images and images made with the space telescope’s Near Infrared Camera and the Multi-Object Spectrometer.

Dust obscures visible light. But the light at near-infrared wavelengths (a shorter-wavelength subset of infrared) is able to pass through the dust. By comparing the two imaging results—and analyzing what light was obscured in the first but not obscured in the second—we were able to create the image of the dust. We were also able to see some small young star clusters that are either invisible or very nearly so in the visible-light image.

Both of these images were built with multiple images taken in 2005. There was a problem with getting all the individual near-infrared images to line up correctly with the ACS images. I spent time off and on when I could over the years trying to get a good self-consistent mosaic. 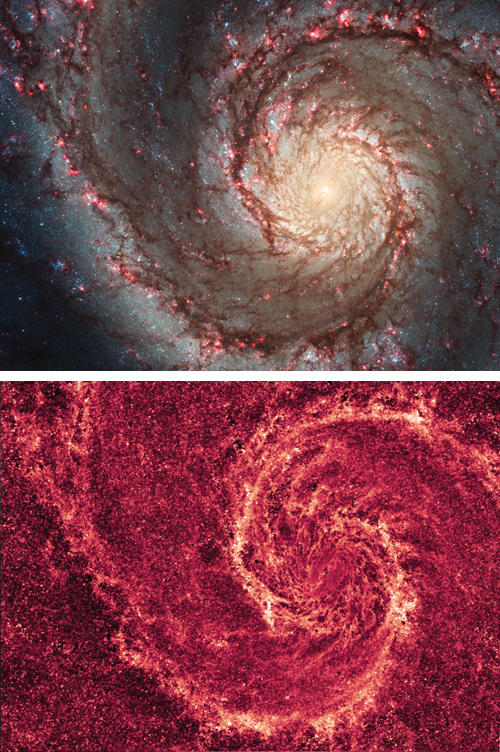 A. S. Why is it useful to see dust in a galaxy?

M. R. Our current thinking is that these clusters are still surrounded by the dust from the original clouds that they formed within. We need to understand how the clouds of dust that stars form from are put together to understand how parts of the clouds collapse and form stars. The dust has structure on a large range of scales. By understanding how many of these clusters there are of a given age, we gain insight into the star-formation process.

A. S. What do these images teach you about this galaxy?

M. R. The discovery of young clusters is the clearest new thing. I am also quite interested in the overall way the dust and gas are distributed and whether the dust is really in clouds that are held together by gravity. If we can estimate the mass of the dust, we’ll be able to see if there is enough mass in the clouds for gravity to hold them together.

A. S. What more do you expect to be able to detect at M51 when the more infrared-optimized James Webb Space Telescope is launched in 2014?

M. R. James Webb will have three times the resolution and 10 times the sensitivity of Hubble in the near-infrared spectrum. With this combination we’ll be able to see smaller and fainter dust clouds and be able to probe the star formation process closer to the time when stars are born. We’ll also be able to observe at longer wavelengths where the dust is glowing. So, we can directly image the dust rather than looking at its effect on the starlight.

A Neoliberal Economics of Science