Pat Shipman, in her Marginalia “Do the Eyes Have It?” (May–June 2012), hypothesizes that domesticated dogs would have proffered significant advantages in population growth to modern humans competing with Neandertals. I have worked with coastal Australian Aboriginal communities for a number of years and adopted a dog from one of their camps [see photo]. I feel strongly that Shipman’s hypothesis will prove to be accurate. 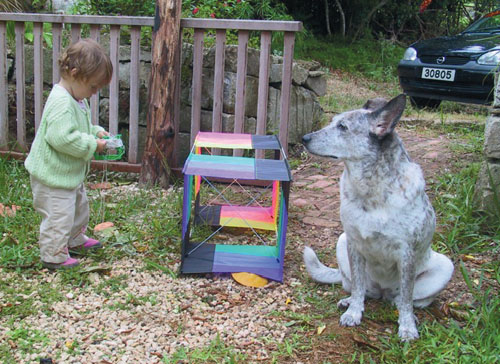 Dingos (Australian wild dogs) are an indispensable part of Aboriginal community life. I have seen camp dogs used in the hunting of monitor lizards and even in rounding up schools of fish in a retreating tide. Perhaps most important, they functioned as a community warning and protection system, specifically around women’s camps.

In competition between Neanderthals and modern humans, the defense of women and, by association, small children could have been a game changer. Improved hunting success may have been a factor in modern humans’ success, but to my mind, the community-protection services provided by dogs was likely far more valuable.

Shipman’s article brings to mind the title anthropologist Deborah Bird Rose used for her book on Yarralin community life: Dingo Makes Us Human. Dogs have certainly made me more human.

I enjoyed Pat Shipman’s May–June Marginalia on the coevolution of humans and dogs. Shipman reviews nicely several of the benefits that have led to selection for that coevolution. I especially like the hypothesis she discusses about the evolution of white sclerae and nonconcealing eyelids in humans for communication with dogs. Dogs also have white sclerae and eyes large enough for their sclerae to show, and my own observations suggest that they use their eyes to communicate with humans as well as with other dogs. Although my dogs often move their heads to direct my attention toward a distant object, they frequently move their eyes only, thereby using their white sclerae to show the direction of gaze.

Given the extensive coevolution between humans and dogs, I am amazed that some people are uncomfortable around dogs. Could avoiding dogs have a selective advantage as well?

Regarding Dr. Powell’s question, it seems likely to me that the diversity of human responses to animals (not only dogs) is partly based on learned experience and probably partly genetic. That is, a child who has never been encouraged to observe or interact with an animal probably won’t develop much sensitivity to the “language” of that animal. During the process of socialization, children develop a theory of mind-—they learn that other people have feelings and ideas that might be different from theirs, and they learn how to deal with those differences. Such learning can occur with animals as well.

A genetic component likely exists as well. Just as some people are very good at communicating with others and understanding or intuiting their feelings, some are very poor. This ability is a particular challenge for people with autism. Despite that, Temple Grandin, for instance, has autism, is brilliant at understanding animals and is also high-functioning. Whatever genetic basis there might be for understanding animals is likely to involve multiple genes and to require training. Genetic variability could involve some other useful trait that research hasn’t uncovered yet, or it could result from simple variability.