The Tragedies and Treasures of Afghanistan

In the fourth century B.C., Alexander the Great invaded and occupied at tremendous cost the land of Bactria. This region (now northern Afghanistan, southern Tajikistan and southeastern Uzbekistan) soon became the most truculent in Alexander’s empire, and after his death a civil war erupted among the Greeks settled there. Rival factions promoted rival kings who created rival secessionist states. The Greeks in Bactria fought one another mercilessly from one generation to the next, until (in the words of one ancient source) they bled themselves dry. 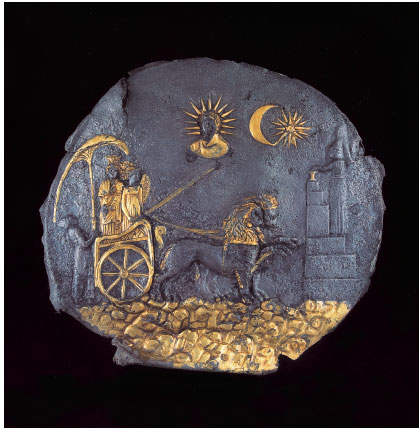 Finally, in 145 B.C. a swarm of nomadic invaders swept down from the north, drove the war-worn Greeks out of Bactria and plundered their dying cities. Inside the palace treasury of one such city, Ai Khanoum, the invaders gathered together the gold of the vanquished Greeks—coins, jewelry, figurines—and methodically melted them into fist-sized ingots, the more easily to haul them away. But before the nomads could make off with their spoils, history quickly repeated itself, and they were overtaken by a second wave of invaders. In their haste to escape, the ingot-makers had to leave their tools and treasure behind. They buried them beneath the palace floor, hoping to retrieve them in safer times, but that never came to pass.

More than 21 centuries later, just a year ahead of the massive Soviet invasion of 1979 (another chapter in Afghanistan’s chaotic history), archaeologists discovered the ingots hidden at Ai Khanoum and sent them to the National Museum in Kabul. Soon, as rival mujahedeen factions fought off the Russians, and then one another, the museum fell under relentless attack. When the Taliban triumphed, most of Afghanistan’s precious antiquities were looted or deliberately destroyed, but not the golden ingots. They, along with a selection of other artifacts from major archaeological sites, were secretly stashed beneath the Presidential Palace by courageous museum officials. Thus survived the plunder won by warring Greeks, who lost it to invaders who melted it down and hid the lumps from other invaders until the ingots were found again in a new era of invasion and civil war, only to be hidden from looters once more beneath another palace. Plus ça change, plus c’est la même chose. 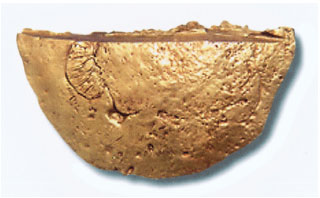 Four of these very ingots may be seen in an exhibition now touring the United States—Afghanistan: Hidden Treasures from the National Museum, Kabul—and in its catalog, which bears the same title. The exhibition is now at the Museum of Fine Arts in Houston and will be at the Museum of Modern Art in New York from June 23 to September 20.

Thanks to an effective integration of text and image, the book can stand alone, whereas the exhibition really does not. Museum visitors who want to experience more than a visceral gold rush must read the book to appreciate the artifacts, which come from very disparate archaeological contexts stretching from about 2200 B.C. to the first century A.D. The connections between a hoard of Bronze Age bowls, a Greek colonial city, six nomads’ graves and an anonymous merchant’s warehouse are not self-evident.

The academic weight of this volume therefore rests squarely on the essays by various authors that are devoted to the four archaeological sites featured in the exhibition: Bronze Age Tepe Fullol (Jean-François Jarrige), the city of Ai Khanoum (Paul Bernard), the Tillya Tepe necropolis (Viktor Ivanovich Sarianidi and Véronique Schiltz) and the Begram storehouse (Sanjyot Mehendale and Pierre Cambon).

Of these sites, that of Ai Khanoum is by far the most important archaeologically and historically. The attractive grave and trade goods uncovered at the other sites, although certainly significant, do not match the scientific value of the temples, palace, gymnasium, theater, inscriptions and other features of Ai Khanoum, which was a long-lived urban center. One of the two sundials excavated at Ai Khanoum shows the city’s devotion to the teaching of science; this instrument has a unique design whose calibration links it to Syene in Egypt and to Ujjain in India, locales key to the development of ancient astronomy.

The French volume accompanying the original Paris exhibition provides the reader with separate bibliographic entries for many artifacts, making it easy to learn more about them. The American iteration, unfortunately, offers much less guidance on specific objects and has only a very brief bibliography at the end. It also lacks the technical appendices that make the French edition much more useful to scholars who may be curious about laboratory analysis and restoration; U.S. readers get only the working text of Afghanistan’s Law on the Preservation of Historical and Cultural Heritage. One other difference between the French and English volumes is that in the latter, artifacts are not always numbered sequentially and there is no item 35. This caprice arises from a reorganization of the exhibition after its debut in Paris, where Begram and not Tillya Tepe figured as the climax of the show.

Archaeologists may wish to skip the first 31 pages of the book, which express the obligatory good wishes of various officials responsible for the exhibition. Political scientists, on the other hand, may find this section mildly interesting. The comments of President Hamid Karzai and others press the notion of a “new” Afghanistan that protects its cultural heritage, seeks world peace and values its historic ties to the West. “By organizing this exhibition,” writes the Deputy Minister of Information and Culture, “we want to affirm our commitment to the international community that Afghanistan is changing from a culture of war to a culture of peace.” It is hard, however, to forget war and suffering while looking at the little ingots from Ai Khanoum. As for the international community, the exhibition, which Karzai refers to as a “vibrant celebration of Afghanistan’s beauty, culture, and history,” has so far visited France, Italy, the Netherlands and the United States, with future tours being discussed for Canada and Great Britain. With almost laser-guided precision, this itinerary targets six of the top seven nations supplying troops to the International Security Assistance Force operating in Afghanistan. Cynics might therefore suspect in this goodwill tour a calculated effort to win (back) the hearts and minds of Afghanistan’s principal military supporters, and no one else.

We may earnestly hope that, indeed, Afghanistan now has a brighter future that will give it a firmer grip on the endangered relics of its past. But as upbeat as this book and exhibition are intended to be, we must remember that rejoicing for the survivors of any tragedy must be tempered by remembrances for the lost. At least 70 percent of everything once housed in the Kabul Museum has vanished. Although we should be grateful for the remaining 22,607 items (mostly small beads and spangles from a single archaeological dig), the sobering fact is that other Afghan museums were despoiled as well. Worst of all, most antiquities never had a chance in the first place, because they were pillaged directly from the ground. As one example, the Kabul museum lost more than 11,000 ancient coins from the site of Mir Zakah alone, yet at least 550,000 coins found at the same spot were looted before they were ever seen by an archaeologist or museum curator. In spite of preservation laws, the illicit trade in plundered artifacts from Afghanistan is still a booming enterprise, second only to drug trafficking. Thus, although the word celebrate appears often in the opening pages of this book, archaeologists may ponder those four puddles of gold from Ai Khanoum and wonder, “Is now really the time to rejoice?”