The Sonnet as Science

Domenico Grasso, chancellor of the University of Michigan–Dearborn, began his academic career in 1989 as an assistant professor of engineering at the University of Connecticut. That was the same year that the movie Dead Poets Society opened. The film, about a young English teacher who uses unorthodox techniques to draw students at a tradition-bound prep school out of their shells and give them a broader view of the world, was inspired by a member of the English department also at the University of Connecticut at the time. Grasso has written that he was “hoping that [the professor’s] vision and excitement for the importance of poetry in enhancing the human condition would have relevance to engineering,” so he invited the professor to give a seminar in the School of Engineering. To the young academic’s astonishment, his colleague declined. “He felt that he had nothing to say that would interest engineers,” Grasso wrote. But the incident did not deter Grasso. As he advanced in the academic hierarchy, he found himself in a position to encourage English professors to lecture to engineers—and perhaps vice versa—but he also may have been heartened to find that administrative persuasion is not always necessary to get some faculty members to think outside their disciplinary box. 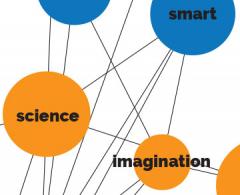