The Politics of Proliferation

The Nuclear Express offers a tour through the political history of the spread of nuclear weapons. Anyone who has ever wondered about such things as how Russia solved the problems associated with making a hydrogen bomb, how Israel and China got the bomb, how concerned we should be about China’s military capabilities, or how Pakistan was able to so quickly test a bomb following India’s tests will find the book gripping. 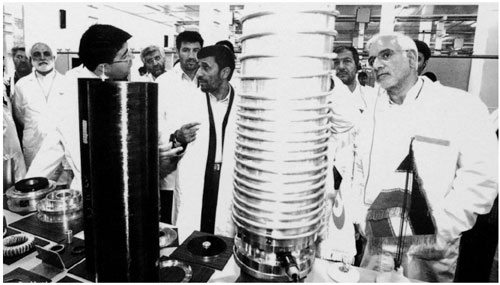 Authors Thomas C. Reed and Danny B. Stillman are well qualified to write this nuclear history. Reed worked at and was a consultant to the weapons program at Livermore National Laboratory, was Secretary of the Air Force under Presidents Ford and Carter, and was a Special Assistant to President Reagan for National Security Policy. Stillman directed the Los Alamos Technical Intelligence Division for 13 years. (In the interest of full disclosure, I should mention that I know Reed; we met more than 50 years ago as students at Cornell, and our paths have crossed several times in the intervening years.) The authors have strong opinions, but their account of events is supported by extensive research, with which they received substantial assistance from senior intelligence officials and other experts.

The book begins with the discovery of fission and the influx into the United States of European scientists following the rise to power of the Nazis. Many nuclear researchers settled at Columbia University, the University of Chicago and the University of California, Berkeley, and from those institutions came the scientists who led the Manhattan Project.

U.S. progress in making an atomic bomb was rapid, and Japan suffered the consequences—which could have been much worse. Although some descriptions of the first use of nuclear weapons have given the impression that the United States had only the two bombs that were dropped on Hiroshima and Nagasaki, Reed and Stillman write that another “Fat Man” bomb like the one dropped on Nagasaki would have been available only nine days after that attack, given that the necessary weapons components and bomb casings were already on Tinian Island. The authors believe additional bombs could have been put at General Marshall’s disposal at a rate of about one per week.

The Soviet Union had difficulty matching the pace of nuclear weapons production in the United States, despite receiving substantial help from espionage and despite offering unusual “incentives”—for example, the designer of the first Soviet atomic bomb was told that if the first test of it succeeded, he would be spared execution. Fortunately for him, the test was successful.

Stillman first toured Chinese nuclear weapons facilities at the invitation of the Chinese in 1990. He returned for nine additional such visits over the next decade. The book describes how surprised he was initially to discover that the Chinese nuclear program is very extensive, with “excellent scientists doing incredibly good work but publishing nothing.” He and Reed had found the same state of affairs when they visited the Soviet Union. The authors believe that the desire of Chinese and Soviet officials for scientific respect was part of the reason they allowed the visits.

Reed and Stillman, who are wary of China, opine that Chinese leaders would not be upset by “the devastation of Washington or New York, so long as that calamity was not directly attributable to Beijing.” The Chinese nuclear weapons program is much larger than that of the United States, Reed and Stillman believe, and is the equal of the U.S. program technologically. They also believe that ties between China and Pakistan led to Pakistan’s confidence in its nuclear weapons. Specifically, they maintain that at the behest of Benazir Bhutto, China tested an atomic bomb for Pakistan on May 26, 1990, at the Lop Nur Nuclear Test Site. As supporting evidence, they note that after the Indian nuclear tests of 1998, “it took only two weeks and three days for the Pakistanis to field and fire a nuclear device of their own.”

Reed and Stillman describe the help given to the Israeli nuclear weapons program by France and South Africa. They think that South Africa supplied the uranium Israel needed in return for weapons technology. They also reach the conclusion that Israel, working with South Africa, tested a neutron bomb in September 1979, perhaps detonating it inside a steel bank vault on a barge 1,500 miles southeast of Capetown.

Was Iraq close to developing a bomb? Secretary of State Colin Powell, speaking to the United Nations Security Council in February 2003 about high-specification aluminum tubes that had been acquired by Saddam Hussein, said, “Most U.S. experts think they [the tubes] are intended to serve as rotors in centrifuges used to enrich uranium.” Reed and Stillman note that at the time no one other than supporters of the Bush administration’s political agenda actually believed that to be the case. Experts from the Department of Energy and the International Atomic Energy Agency, and even the State Department’s intelligence staff, rejected the claim.

The knowledge of how to make a simple nuclear bomb is no longer secret and can be found in unclassified literature. There are many technical people capable of using that knowledge. However, to make the bomb requires either plutonium or highly enriched uranium. Obtaining these materials is the biggest hurdle that a potential proliferator must overcome. Reed and Stillman are concerned—as are the IAEA, the United States and many other nations—that not enough is being done to restrict access to weapons material.

The book concludes with an exhortation. The authors say that we need to make a unified effort to do a number of things that will be difficult: “finding fissionable materials, strengthening the IAEA, getting realistic about energy policy, rebuilding the American intelligence community, and taking China seriously.”

Readers may not agree with all of Reed and Stillman’s opinions and conclusions. However, their warnings deserve careful consideration. The A. Q. Khan network having apparently supplied the means to obtain weapons-grade uranium to anyone with the necessary funds, the world community must be vigilant to avoid frightful proliferation.

John F. Ahearne is an adjunct scholar for Resources for the Future and a lecturer in the School of the Environment at Duke University. He has served as commissioner and chairman of the U.S. Nuclear Regulatory Commission, system analyst for the White House Energy Office, Deputy Assistant Secretary for Energy, Principal Deputy Assistant Secretary for Defense, executive director of Sigma Xi and director of the Sigma Xi Ethics Programs. His professional interests include reactor safety, energy issues, resource allocation and public policy management.

Chemicals We Have Loved—and May Need to Break Up With