The pressures our teeth endure when we bite and chew are measured using the same scale that geologists use to measure the pressures under the Earth’s crust. In addition to those enormous pressures, we subject our teeth to wide temperature variations over short time periods with hot and cold food and drink. The enamel covering of our teeth also withstands extreme acid-base fluctuations, some of which come from various populations of bacteria that grow in our mouths. Overall, enamel is by far the toughest material in our bodies, and scientists have been examining its structure and composition for decades. Those who had hoped to use enamel as inspiration for creating tough synthetic materials, however, were doomed to fail: They were missing a newly discovered aspect to the structure of human enamel that’s essential to its toughness.

“If you grow crystals of apatite—the mineral that our teeth are made of—in the laboratory,” says physicist Pupa Gilbert, “it grows like needles,” with the crystals always oriented the same way along their long axes. Gilbert, who is a professor at the University of Wisconsin–Madison, says that when viewed through a scanning electron microscope, the lab-grown crystals look like bunches of straight, uncooked spaghetti noodles in a box. So the assumption had been that apatite crystals within human enamel had the same coorientation. But to actually look at the individual crystals within human enamel, Gilbert and her colleagues had to employ a new nanoscale imaging technique that she had developed. The imaging revealed that apatite crystals in human enamel are “slightly misoriented” from one another, says Gilbert, with adjacent crystals’ orientation ranging from 1–30 degrees from one another.

This new imaging method is called polarization-dependent imaging contrast mapping, or PIC mapping, and it requires a powerful x-ray source, which the team accessed at the Advanced Light Source of Lawrence Berkeley National Laboratory. To make the PIC map of human enamel shown above, scientists illuminated the apatite crystals within the enamel of extracted teeth by directing the x-ray photons at a 30-degree grazing angle to the crystals. As occurs with other such imaging techniques, these photons knocked out electrons, which are called photoelectrons. Now, even though the x-ray photons penetrate 100 nanometers into the enamel, only photoelectrons from the topmost 3 nanometers escape the sample to be imaged by a photoemission electron microscope, which just so happens to be sufficient to capture the orientation of individual crystals. “So with this method, we are able to look at the orientation of crystals down to the nanoscale,” says Gilbert.

Misorientations are common in non-biological materials, and especially in many metals and alloys. The interfaces between metallic crystallites, or grains, are called grain boundaries and are important in determining a metal’s mechanical properties: Typically a metal with grain boundaries is weaker than one without them. “To see that [misorientation] in a biological system was really mind-blowing,” says Markus Buehler, who is an engineer at the Massachusetts Institute of Technology and is co-corresponding author with Gilbert of their team’s research paper, which was published recently in Nature Communications. “It opens up a whole new way of understanding these natural systems,” says Buehler. So, to better understand the purpose of the misorientations within human enamel, Buehler programmed simulations of apatite crystals to test various hypotheses, including different angles between adjacent crystals.

“By looking at a range of angles, we could explore the physical behavior of the system,” says Buehler, “and we can construct systems that don’t exist in nature.” As to trusting the output of these simulations, Buehler says that’s a matter of trusting the input. “The reason that these simulations—molecular dynamics simulations—are so powerful is that they do not need any inputs or rely on any assumptions about how the system behaves: All that these models have, going in, is information about how the molecules interact at a very basic level of chemistry.”

Buehler’s simulations showed that Gilbert’s observed, slight misorientations of crystals confer toughness by keeping cracks in one crystal from propagating to the next one, because the cracks are deflected at crystal interfaces (see diagram above). “Not only [are] misorientations extremely effective at deflecting cracks,” says Gilbert, “but small misorientations are better than big misorientations. And that was completely unexpected, completely counterintuitive.”

The team did not test every angle with full molecular dynamics simulations because of a technical limitation called periodic boundary conditions. “That means that instead of simulating an infinite system,” says Gilbert, “you basically simulate a periodic system, which is a very clever shortcut [that uses repeating elements] to assemble a larger system.” Full simulations of every angle would have been computationally expensive, requiring “weeks on end of computer time,” says Gilbert. However, using the shortcut, it was possible to compute full simulations for three specific angles: 0, 14, and 47 degrees.

“This crystal misorientation has a clear evolutionary advantage, and it goes hand in hand from the evolutionary point of view [with the fact] that we do not replace or renew our [adult] teeth,” says Gilbert. By comparison, mice, for example, have teeth that are continuously growing, so if a mouse tooth breaks, it will soon be replaced. Using PIC mapping on mouse enamel showed that its apatite crystals are all oriented in the same direction, raising the question of how it is mouse cells build perfectly co-oriented apatite crystals in enamel whereas human cells make the same crystals slightly misoriented from one another. “This is fascinating, “says Gilbert, “because we don’t know.”

Also unknown is whether the observed enamel structure in adult teeth is also in baby teeth or in any of our closest evolutionary cousins, the apes. Engineers, though, do not need to wait for answers to those scientific questions before trying to replicate human enamel’s delicate balance of grain boundary angles, microstructures, and nanostructures in synthetic materials. Although neither Gilbert nor Buehler synthesize new materials, says Gilbert, “we’re in close collaboration with people who do” and have applied for grants to do exactly that.

An audio interview with the researchers: 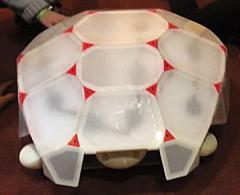