The Buzz of New Beginnings

Rigging up a new life abroad can be revitalizing

Why do scientists move around so much? There are of course the obvious reasons: to work at a prestigious institution, to join the lab of a top scientist or to explore a new field. But moving to a different country also brings many non-scientific rewards—and can be a lot of fun.

Doing science and moving abroad have a lot in common. There’s the excitement of discovering something new and the thrill of the unexpected; the frustration when things don’t work out as planned (or not at all); the improvisation needed to overcome sudden obstacles; and there are the helpful strangers who, like good supervisors or friendly colleagues, find themselves in a position to help and don’t hesitate to do so. Some years ago, I experienced a memorable episode that illustrates how finding yourself in a foreign country can be both challenging and great fun. And how just approaching people can make all the difference. 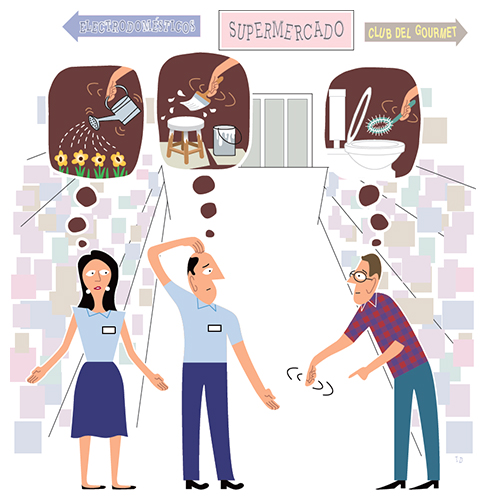 It was my fifth day living in Madrid, Spain—a Saturday. With the exception of a mattress and a suitcase full of clothes, my flat was still largely empty. So I had set out to buy the essentials for my new home. Not speaking Spanish, what had appeared as a routine task quickly turned out to be no slight challenge. I had chosen a large, out-of-town department store and was particularly looking forward to exploring the food section with its trove of Mediterranean specialities. With huge offerings of traditional Spanish ham, Rioja wines and Manchego cheeses, buying food indeed turned out to be fantastic.

But then the tricky bit began. While most food packaging had pictures of what was inside, this was not true for the more mundane goods I was after. How do you guess from a breaking wave whether you’re looking at dish soap or mouthwash? Having left my dictionary safely at home, I resorted to pantomime, trying to enact the various tasks I needed products for. I was soon the center of attention for a growing group of shop assistants and various well-meaning fellow shoppers who—in a supreme collaborative effort—attempted to divine what I was trying to mime. A particular highlight came when I started to explain that I required a toilet brush. When, after a good while of wild guessing and various creative efforts on my part (all while trying to preserve some dignity), they finally understood, we were crying with laughter and very nearly embraced each other in relief.

After a solid five hours—my unbeaten record for grocery shopping—I had finally managed to get all I wanted. In the process I had likely done my bit to dispel the myth that Germans are a stiff bunch (they are, of course, but not when buying toilet brushes abroad). My salad was beginning to show signs of fatigue after a long time out of its air-conditioned display, so I decided it was time to go home. However, that was easier said than done. I had come by bus, but now I was pushing a trolley overflowing with stuff that needed to go home with me. There was no way I could haul 12 crammed carrier bags to the bus stop, keep them secure during the ride and then drag them all the way to my flat. I needed a taxi. To my dismay I found no taxi stand outside the shop, and even though I waited for a good 20 minutes, not a single one drove past.

By this point I was exhausted. I hadn’t eaten in a while, and despite the fun of miming kitchen utensils, not being able to just grab what you want off a shelf can be tiring. And that’s when one of those incidents occurred that sometimes happen in a foreign land. Just when you think you’ve had enough, you encounter a stranger so selflessly helpful that all seems okay again. Earlier in my life, when I was a summer student in Montréal, it had been a fellow lab member who put me up in her flat when my dorm room was unexpectedly canceled; then there was the father of another student who tracked down the janitor of the students’ hall one Sunday night in Dundee after I had just arrived (very late) from Germany to start my MSc and had no key to get in.

In this case, the helpful stranger was a young Peruvian woman who was sitting in a car nearby, waiting for her husband to return from some impromptu shopping. I approached her to ask if she could call me a taxi (I had by then found out that Madrid’s taxi offices don’t look kindly upon those who do not speak their language and fail to state clearly where they are). But after a quick look at my face, my shopping cart and then my face again, she simply replied in excellent English “Where do you need to go?” I told her and she said that they would drive me home. So we heaved my shopping into her car (the salad was in a lamentable shape by now) and soon after, when her husband returned, drove off.

That evening back in my unfurnished flat I reflected on moving abroad as part of one’s career as a scientist. Science has always been international. Right from the founding of the earliest universities, these institutions have attracted scholars from different countries. But the world around the small community of scientists has changed. When my mother announced in 1958 that she was going to live in France for a year, her grandfather thundered, “One only enters France with a sword in one’s hand.” When I left for Scotland four decades later, I was given a long hug, a guide to Scottish castles and distilleries and enough provisions to last me for a week.

Studying and working abroad is, of course, still fraught with difficulties. On top of language and cultural barriers there are administrative obstacles: courses and degrees that are not recognized or payments to pension funds and insurances that cannot be transferred. But the thrill of venturing abroad and the friendly strangers will hopefully remain, helping you overcome those obstacles you would not have faced at home—and making your move all the more worthwhile.

This text is based on an essay that won the 2009 Write Move Prize awarded by the European Molecular Biology Organisation (EMBO).

Behind the Scenes of Foldit, Pioneering Science Gamification