At a time when coastal nations worldwide face threats from sea level rise if climate change advances, scientists are sounding an additional warning. 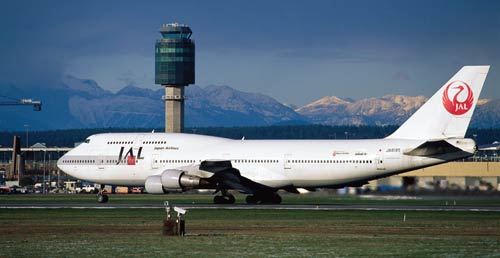 It’s not simply that higher global temperatures could raise seas by expanding ocean water and melting glaciers. What people build, particularly on land with looser soils, could worsen the blow by sinking some coastal areas faster than nature would alone.

One project designed to quantify this effect focused on the Fraser River delta in western Canada, home to the coastal city of Vancouver. Using radar measurements taken by satellites, geophysicist Stéphane Mazzotti and colleagues found land subsidence, or sinking, that appears attributable primarily to the weight of what was constructed atop it.

“Subsidence due to human activity exceeds the natural rate in heavily built areas,” says Mazzotti, whose findings were published in Geology.

Vancouver itself, built on solid substratum, is not at risk. And in undeveloped or lightly developed portions of the metropolitan area, natural consolidation of upper Holocene sediments is causing subsidence of only 1 to 2 millimeters per year. But in heavily built-up locations outside the city—including the Vancouver International Airport, ferry terminals and industrialized zones—the drop was significantly greater: 3 to 8 millimeters per year.

Mazzotti, a research scientist with the Geological Survey of Canada, and fellow scientists considered how those changes could interact with two sea level predictions for the end of 2100. One was the mean projected rise, 30 centimeters, by the Intergovernmental Panel on Climate Change. The other, based on glaciology and empirical evidence published in 2006 and 2007 in Science, projects a 100-centimeter increase. 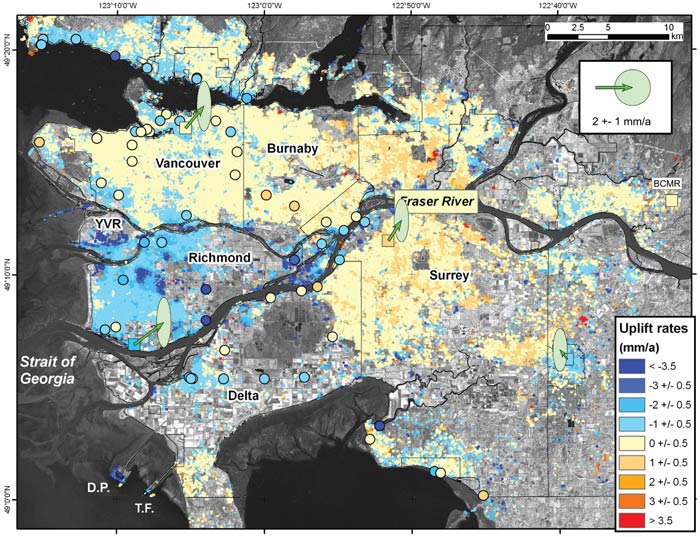 Natural subsidence, their data show, could augment climate-change-related sea level rise by 50 to 15 percent under the two scenarios. Anthropogenic subsidence could augment it by 130 to 40 percent, they say. In both cases, subsidence in the delta would need to be considered while preparing for sea level increases, particularly in the design of barriers to protect developed land from seawater.

“Municipal planners have recognized that dykes that were built here in the 1960s and 1970s have to be raised to address global sea level rise. Based on our research, it looks like they will have to be raised a bit higher,” Mazzotti says.

Scientists have used radar measurements to pinpoint differences in subsidence rates in other delta regions, including New Orleans, which was devastated in 2005 by flooding after Hurricane Katrina. Tim Dixon of the University of Miami and colleagues argued in 2006 in Nature that irregular subsidence could have played a role. His team concluded that most of New Orleans was sinking at an average rate of 6 millimeters a year. But some spots experienced rapid subsidence in the three years prior to Katrina, as much as 29 millimeters per year. One area with higher subsidence was on the Mississippi River near the Gulf Outlet Canal, where levees failed during peak storm surge.

Dixon and collaborators also argued that some levees may have failed after Katrina because subsidence either lowered levees sufficiently to allow overtopping or because weakened substrates promoted levee failure. Previously, other scientists had warned that subsidence in New Orleans was aggravated by flood protection measures that disrupt natural drainage and reduce the deposition of sediments. “Lots of cities are built on deltas,” Dixon says. “Space observations are providing a brand new way to look at the problem.”

When it comes to threats of erosion and flooding from sea level rise, municipalities built on deltas will now have a related warning to consider. Working in the Vancouver area, Mazzotti and his colleagues compared vertical land movement measurements captured by interferometric synthetic aperture radar between 1992 and 1999 in the greater Vancouver region. Specifically they assembled 350,000 pixels from radar images to track vertical motion changes, with each pixel covering about 13 by 13 meters of land surface.

The scientists confirmed and expanded the radar measurements with Global Positioning System (GPS) and land-based surveying tools. They found no evidence that local tectonics or other factors sometimes associated with land sinking could explain the changes in the Fraser River delta.

“The specifics may vary depending where you are on a delta. But subsidence is enhanced in areas that are heavily built. That needs to be taken into account,” Mazzotti says.