See How the Earth Moves

Interferometric Synthetic Aperture Radar (InSAR) measurements, collected by satellites circling Earth, can provide big insights into major earthquakes. Richard Walters and John Elliott demonstrated this after a 6.3-magnitude quake struck central Italy in April, killing close to 300 people and severely damaging the medieval town of L’Aquila. By comparing measurements taken before and after the earthquake, the geophysicists pinpointed the responsible fault, measured changes aboveground and calculated likely shifts underground. Walters and Elliott are researchers at the University of Oxford and the United Kingdom’s National Centre for Earth Observation. In an e-mail exchange, Walters explained their studies to American Scientist associate editor Catherine Clabby. 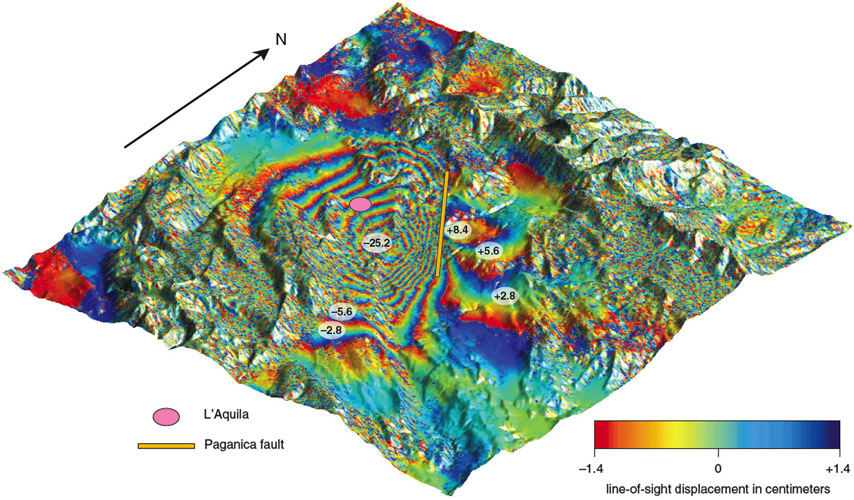 American Scientist: How do you capture the sort of detail you achieved for the L’Aquila earthquake?

Richard Walters: To construct an interferogram, we look at differences between two radar phase images. Changes in phase come from ground displacements between the image acquisitions, changes in satellite position, topographic effects and changes in the atmosphere, among other things. We correct for changes in satellite position with precisely calculated orbits and for topographic effects with a high-resolution digital elevation model, leaving an interferogram that shows ground displacements. It is difficult to correct for the atmospheric signal, but we propagate atmospheric errors through our model to look at how this factor could affect our understanding of an earthquake.

A.S. What information does this provide regarding an earthquake?

R.W. InSAR’s main strength is its high spatial resolution. Compared with seismology, InSAR can identify an earthquake’s precise location. For instance, there are many faults in the L’Aquila region, and it wasn’t immediately apparent which had ruptured. InSAR located the earthquake on the Paganica fault, which was less well known than other nearby faults. The data showed one side of the fault moved up a maximum of 8 centimeters while the other moved down a maximum of 25 centimeters. Using our model, we also estimated a maximum slip of 90 centimeters about 7 kilometers below the surface.

A.S. What is the usefulness of this data?

R.W. It is often assumed that active faults are associated with large topographic features such as high mountain ranges. However, the InSAR data showed that this fault was associated with smaller topographic features. This has implications for Italy and similar regions. In addition, by modeling, we can try to understand the nature of an earthquake and its source fault. And we can calculate how an event may have moved other nearby faults closer to failure. This is important for assessing seismic hazards. Several faults near L’Aquila that were moved closer to failure are near the historic towns of Amatrice and Campotosto and near a large reservoir with a hydroelectric dam.

A.S. How did you obtain the data you needed for these studies?

R.W. We used the Environmental Satellite (ENVISAT), part of the European Space Agency (ESA), to study the L’Aquila earthquake. To produce images as quickly as possible after an earthquake, we need fast access to the data and precisely calculated satellite orbits. ESA’s response was extremely rapid. They ensured that all new data was acquired by ENVISAT each time it passed over the area. A data catalog, constantly updated, was made freely available. Orbit information was available within several days. ESA collaborates with the Japanese Space Agency and it also uploaded data from the Japanese Advanced Land Observing Satellite.

A.S. This technology can be used to observe changes in volcanoes and glacial ice too. How else is it useful?

R.W. InSAR can be used to monitor non-tectonic ground movement, such as subsidence in mining areas; measure long-term slip rates on faults; and help us explore the mechanical behavior of the shallow earth in the weeks and years after an earthquake. InSAR also has been used to produce 90-meter resolution topographic maps for all continental areas between 60 latitude degrees north and south. The hope is that InSAR will be used to routinely monitor ground motions all over Earth.

A.S. Where are our blind spots now?

R.W. We have coverage only up to around 80 degrees latitude north and south due to the slight tilt of the satellite orbital plane relative to Earth’s spin axis. In addition, SAR radar sensors are only one set of several sensors mounted on ENVISAT and require a lot of energy to operate. The satellite can’t acquire data continuously, especially while traversing the dark side of the Earth. And InSAR only captures continental ground motions. There are lots of interesting earthquakes in the oceans that we cannot measure with this technique.

A.S. What improvements are needed? Are they coming?

R.W. Most early SAR satellites used C-band radar with 5.6-centimeter wavelength. This wavelength is easily scattered by vegetation. Several newer satellites use L-band radar with a longer wavelength, about 20 centimeters, enabling views of areas, such as tropical forests, that previously were inaccessible. Also, the European Space Agency plans to launch Sentinel-1, a constellation of two new satellites, in 2011 and 2013. The satellites will have a combined revisit time of six days, a huge improvement over ENVISAT’s 35-day repeat time. Scientists from multiple backgrounds are also working on reducing atmospheric errors in interferograms. Space agencies will improve the stability of satellite orbits. That will help reduce measurement errors and allow us to study smaller ground motions with more confidence. 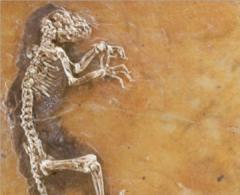