Pressure in the Pink

A pressure-sensitive paint is helping NASA accurately model the extreme forces that spacecraft experience during launch.

Passengers on a plane experiencing turbulence can attest to the kinds of forces that air can exert on flying craft. For a rocket launching into outer space, the knocking about it receives is far worse, and also shifts in location and intensity from moment to moment. “The local fluctuating pressures can be large enough to break a panel or the fasteners holding it on, or damage electronics housed inside the vehicle,” says James Ross, an aerospace engineer at NASA Ames Research Center in California.

That’s why NASA has a long history of testing models of spacecraft designs in wind tunnels before building full-scale versions (computer modeling still isn’t fast enough to replace wind tunnel testing). Engineers usually drill holes in the model and install hundreds of microphone-like pressure sensors all around it to take measurements, but the sensors don’t give full coverage. However, a new type of fast-reacting pressure-sensitive paint could fill in the gaps.

Paint that responds to pressure originated a few decades, but the new version is able to respond more dynamically to the rapid fluctuations in pressure during a wind tunnel test: It can sense changes in pressure at a rate of 20 kilohertz, or 20,000 cycles per second. The paint is made from a porous ceramic base layer, to provide greater surface area, which is sprayed with a dye made from molecules that optically fluoresce under the glow of blue light-emitting diodes (LEDs). These molecules are of a class called luminophores, and in this case they are a type of platinum porphyrin. (This luminophore is naturally pink, giving the paint its color.)

Ross’s colleague, aerospace engineer Nettie Roozeboom, explains the process: “We pulse the lamps that will excite the luminophore to a greater energy, and this excited molecule is going to return back down to its normal state.” There are two ways the luminophore can expel its extra energy, say Roozeboom. “One way is that it can expel a photon at a different wavelength, which is what we’re sensing,” she said. “Also, it can dump energy into a nearby oxygen molecule.”

As a result, luminophores release less light when they are subjected to more oxygen, and an increase in air pressure also raises oxygen levels. Therefore, the paint will look darker in regions experiencing more pressure. “We’re taking images of this paint and recording the intensity of the light that’s being emitted from the molecule,” says Roozeboom.

Test results have been promising. “If we look at the signals we get from the paint adjacent to the microphones, they look essentially the same, so we think the paint is giving a good pressure signal,” says Ross. “The comparisons that we’ve done one-to-one on different sections of the model where we have microphones and paint, show that sometimes the microphones analysis gives us loads that are too high and sometimes it gives us loads that are too low.”

The biggest problem the team has now is the amount of data that they collect. “We took data for a total of six minutes for our whole test, and the result was 14 terabytes of data,” Ross says. “It probably took us three months to get the data fully processed. You don’t get real-time turnaround.” 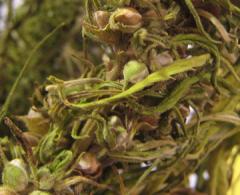