On Neptune, It's Raining Diamonds

Icy gems may be forming deep inside Neptune and Uranus

Deep within Neptune and Uranus, it rains diamonds—or so astronomers and physicists have suspected for nearly 40 years. The outer planets of our Solar System are hard to study, however. Only a single space mission, Voyager 2, has flown by to reveal some of their secrets, so diamond rain has remained only a hypothesis.

Beyond the lingering mystery of the diamond rain, there’s a big loss in our failure to study Uranus and Neptune inside and out. It limits our understanding of the Solar System and the galaxy, because planets of this size have turned out to be extremely common in the Milky Way. The number of planets similar in size to Uranus and Neptune that have been found in the galaxy is roughly nine times greater than the number of much larger planets similar in size to Jupiter and Saturn. The outermost planets also seem to bear scars that could tell us a lot about the formation of our own Solar System. So there’s a growing sense of urgency to explore Neptune and Uranus —both to better understand where and how planetary systems form and also to refine our ideas about where to look for planets that can sustain life.

Although we’ve been limited by spacecraft and ground-based telescopes regarding how much we can learn about the exteriors of Uranus and Neptune, advances in laboratory simulations are enabling remarkable new insights about what’s happening in their interiors, including what gives rise to diamond rain. Discoveries such as these reveal the complexity of the chemical processes involved in the evolution of these planets. Our simulations give clues to the internal nature of worlds far beyond the Solar System, even worlds that we may never see directly from the outside.

Neptune and Uranus are called the “ice giants“ of our Solar System because their outer two layers consist of compounds that include hydrogen and helium. In astronomy slang, ice refers to all compounds of light elements that contain hydrogen, so the planets’ water (H2O), ammonia (NH3) and methane (CH4) make them “icy.” The beautiful bluish hue of both planets is the result of methane traces in their atmospheres.

However, it is the “ice” in the deep middle layers that really shapes their properties. On Neptune, for example, beneath a hydrogen-helium atmosphere that is 3,000 kilometers thick lies an ice layer that is 17,500 kilometers thick. Simulations suggest that gravity compresses the “ices” in this middle layer to high densities, and the internal heat raises the internal temperatures to several thousand kelvins. Despite the high temperature, pressures more than one million times greater than the atmospheric pressure on Earth compress the so-called ices into a hot, dense fluid.

Under such heat and pressures, ammonia and methane are chemically reactive. Scientists have modeled exotic processes—including diamond formation—taking place between the compounds deep within the ice layers. Marvin Ross of Lawrence Livermore National Laboratory first introduced the diamond-rain idea in a 1981 article in Nature titled, “The Ice Layer of Uranus and Neptune—Diamonds in the Sky?” He suggested that the carbon and hydrogen atoms of hydrocarbons such as methane separate at the high pressures and high temperatures inside the ice giant planets. Clusters of isolated carbon atoms would then be squeezed into a diamond structure, which is the most stable form of carbon under such conditions.

Diamond is denser than the methane, ammonia, and water left in the ice layer, so the carbon crystal would start to sink toward the planet’s core. It would accumulate new layers as it falls when it touches other isolated carbon atoms or diamonds, allowing individual diamond blocks to reach a size meters in diameter. We think that, as a result, a thick layer of carbon surrounds the rocky cores of Uranus and Neptune. This carbon layer may consist of blocks of solid diamond—or, if the temperature is extremely high (as some planet models suggest), it might transform into liquid carbon, or a mix of solid carbon and liquid carbon.

If the layer is a mix of solid and liquid carbon, the solid carbon would be of lower density than the liquid, with the result that large “diamond bergs” would float on top of an ocean of liquid carbon. Each possible composition of the carbon layer—solid, liquid, or mixed—would affect the core of the planet differently. Solid diamond, for example, is electrically insulating and has a stiff crystal lattice, whereas liquid carbon is a metallic conductor and flexible. Determining the properties of the carbon layer could reveal whether or not Neptune and Uranus formed from a rocky protoplanet core billions of years ago.

Although Ross’s idea was certainly fascinating, it was mainly hypothetical at the time and needed to be verified by observations. It is impossible with any imaginable technology to design and build a probe that could penetrate deep into Neptune or Uranus and directly observe the formation of diamonds. Scientists instead have tried to recreate the extreme conditions of planetary interiors in their laboratories. Even this more limited goal is extremely challenging, since we need to reliably generate and measure pressures of several million atmospheres and temperatures of several thousand kelvins to simulate their effects on the elements found inside the ice giants. In essence, we need to build a piece of a planet in the lab. 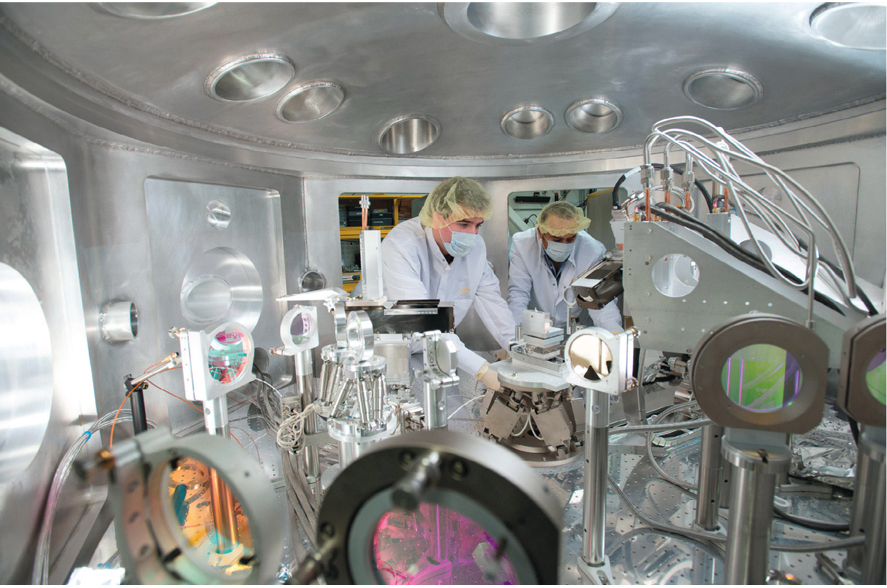 Facilities around the world are tackling the problem by compressing a sample material, such as methane, between two diamond anvils with very small tips that press on the sample. The same effect of pressure enhancement can be seen on a different scale by placing something underneath the heel of a high-heeled shoe. Even though diamond anvils can generate pressures of several megabars (comparable to the pressure that would be produced by placing several thousand African elephants on top of that high-heeled shoe), the sample also needs to be heated by electrical currents or lasers in order to mimic hot planetary interiors. Using such a setup, some experiments have indeed formed diamond. However, in these setups the materials representing the planetary ice layers—methane, ammonia, or water—start to react with the diamond anvils and the gaskets. Those reactions can strongly alter and contaminate the results.

Another way to generate the extreme pressure and temperature conditions found inside the ice giant planets is to create shock compression using strong explosives, high-velocity gun projectile impacts, or pulsed high-energy lasers. Although this process both compresses and heats the sample at the same time, the samples remain in the interesting state for only a tiny fraction of a second. Particularly for the high-energy lasers, which can achieve gigabar pressures and temperatures of millions of kelvins (comparable to the temperature at the center of the Sun), the conditions usually last a few nanoseconds or less. That is a very limited time in which to obtain precise and direct measurements of structural changes of the sample.

This situation changed in 2009 with the completion of the world’s first x-ray free-electron laser: the Linac Coherent Light Source at Stanford University. Combining this machine with a powerful pulsed-laser system allows us to study chemical reactions at conditions comparable to those in the deep interiors of giant planets in real time. Plastics, which are mainly made out of carbon and hydrogen, are useful substances to mimic the material mix in the ice layers of Neptune and Uranus.

In such experiments, the pulsed high-energy laser is focused on a spot 200 micrometers in diameter, which heats a thin surface layer of a plastic sample that is 80 micrometers thick. Its surface is instantaneously transformed into extremely hot plasma, with temperatures of several million kelvins. This plasma vapor expands rapidly. As a result, an extreme pressure force presses the remaining plastic material and drives strong compression waves into the sample. If tuned correctly, the experiment can precisely mimic the pressure and temperature conditions predicted inside ice giant planets. 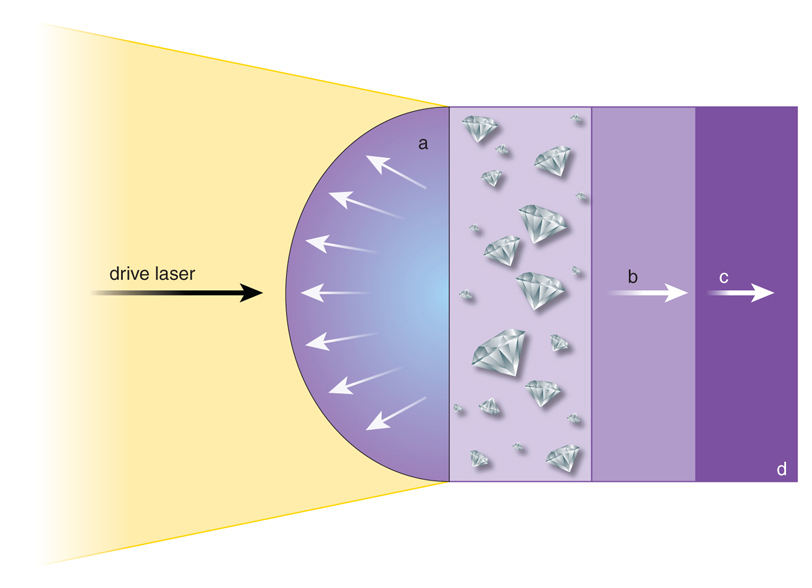 These conditions only last for a billionth of a second, yet every single flash provides a precise snapshot of the chemical reactions inside the sample material. The experiments show that even on such extremely short timescales, chemical processes are fast enough to grow tiny diamonds from the carbon atoms inside the plastic samples. The formation rates observed in the lab suggest that within Uranus and Neptune, where there have been many millions of years to grow diamonds, meter-sized carbon crystals can form.

Understanding the inner processes of the ice giants gives clues to the features of these planets. For example, diamond precipitation releases gravitational energy, which is converted to heat by friction between the diamonds and the surrounding material as they descend. This effect could explain why Neptune is emitting more energy than it receives from the Sun. Such an internal energy source may help to account for the origin of the surprisingly violent storms that are observed on the planet’s surface.

Diamond formation may also explain why the ice giant planets’ magnetic fields are so exotic. Unlike Earth’s magnetic field, the fields around Uranus and Neptune are not symmetrical, and they don’t extend from each pole. These properties suggest that ice giant fields probably originate not in the core but in a thin, rather variable layer of conducting material, such as metallic hydrogen formed as a by-product of making diamonds. Other exotic processes inside the planets may also contribute to their magnetic fields. For instance, the formation of so-called superionic structures of water and ammonia, in which hydrogen ions can move freely through a crystal lattice of oxygen or nitrogen, could add to the conducting material of the magnetic fields.

We will continue to study these phenomena in the lab, but a new space probe mission to Neptune or Uranus (or both) could add a wealth of information about the planets’ internal processes and about how such planets have formed in our Solar System and others. NASA is currently considering such a mission. In 2030, the planets of our Solar System will be favorably aligned for a spacecraft to launch and reach Uranus or Neptune by 2040. Another fortuitous alignment of the planets won’t come for another two generations, so now is the time to start thinking about exploring the ice giants up close and learning more about the Solar System’s intriguing diamond worlds. 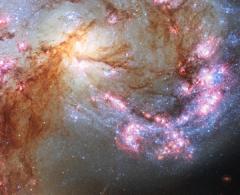 Why Do Galaxies Start Out as Cosmic Pickles?