In and out of the water, transitional forms from the fossil record illuminate the nuts and bolts of evolution

Though missing links are often talked about, it's the found ones that hold a special place in my heart. Found links are fossils that illustrate major transitions during evolutionary history. More than that, such creatures offer unexpected glimpses of the never-predictable twists and turns taken by evolution. Their discovery and surprise bring sheer fun to paleontology and biology.

I have always loved the iconic Archaeopteryx, a beautiful fossil recognized in 1860 that unmistakably combines features of two major groups of animals: birds and reptiles. The exquisite feathered wings of Archaeopteryx bear most unbirdlike claws; its birdlike skull contains an avian brain but carries sharp reptilian teeth, not a beak; and its feathered tail is underlain by a long bony tail typical of a small dinosaur, not a bird. Still, the feathers and wings on these 150-million-year-old fossils qualify Archaeopteryx for the title of First Bird.

Archaeopteryx is a found link in another sense, because the anatomy of this extraordinary species reveals how creatures evolved from propelling themselves along solid substrates, such as the ground or tree limbs, to moving through the air. It was a difficult transition. Archaeopteryx fascinates me in part because its anatomy is not that of a skillful, modern bird, yet it competed with contemporary pterodactyls, which flew using different anatomical structures. I often wonder why birds survived and those wonderful pterodactyls went extinct.

At the time of its discovery, Archaeopteryx was hailed by the anatomist Thomas Henry Huxley as stony proof of evolutionary theory. Decades later, Archaeopteryx was trumped by an extraordinary plethora of feathered dinosaurs—some nonflying—that tell different stories about the evolution of avian features.

I am equally enamored of another found link, the fossil skeleton of Tiktaalik roseae, described on April 6, 2006, in the journal Nature. Tiktaalikis a name suggested by the elders of the Nunavut people, who live where the fossils were found on Ellesmere Island in the Canadian Arctic; it means "large, shallow-water fish." This 375-million-year-old fish shows a delicious combination of unexpected features, some inherited from its fishy ancestors and some typical of later land-dwelling tetrapods (four-footed animals). Neil Shubin of the University of Chicago, co-leader of the discovery team, jokingly calls the newly discovered species a "fishapod." 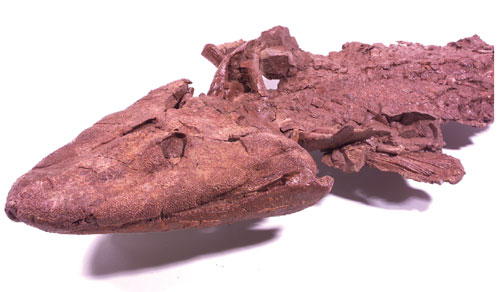 Tiktaalik's fins, gills, scales and primitive jaw show it was a fish. Unlike fish and like tetrapods, it had a distinct neck, so its head moved independently of its body. Its flattened head and broad body make Tiktaalik look somewhat like a weird, scaly crocodile, an impression enhanced by its four-to-nine-foot length. Its skeleton differs markedly from those of crocodiles or alligators, though, despite the overall resemblance in body shape. Tiktaalik's front fins hold the biggest surprise. Each was a sort of half-fin, half-leg containing the bony elements found in a limb—with a functional wrist, elbow and shoulder—and yet retaining the bony "rays" of a fish fin. According to team member Farish Jenkins, Jr., of Harvard University, the front fins were sturdy enough to support the creature in very shallow water or on land for brief trips.

Its broad and robust ribs were imbricated, like tiles on a roof. They helped to support the body on land and probably housed lungs to supplement the gills. The presence of lungs is expected because many of the primitive fish in Tiktaalik's ancestry had lungs for gulping air at the water's surface as well as gills. Soft tissues are rarely preserved in fossils, so the lack of fossilized lungs is unremarkable. With or without lungs, Tiktaalik was uniquely adapted to moving between land and water.

"We were absolutely surprised at the features of the specimens," Ted Daeschler of the Academy of Natural Sciences, co-leader of the team, told me. "That is one of the beauties of this material. We knew the end points—fish at the beginning and tetrapods at the end—but we could not have predicted the sequence in which those anatomical changes occurred." Discovering the unexpected is one of the joys of paleontology. 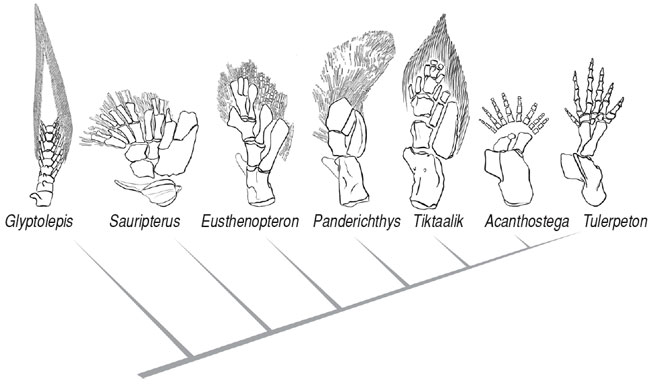 A dramatic change in habitat—becoming a land animal when your ancestors lived in water—required many anatomical changes. Sturdy limbs replaced flexible fins. New foods had to be found, and new means of getting them had to be developed. In this case, when Tiktaalik crawled up on land it probably preyed upon insects. Predatory fish in the past and present often suck aquatic food into their mouths using the same mechanism that passes water across the gills. But Tiktaalik does not have a bony gill cover, which means there was less water flow over the gills and a less effective sucking mechanism. Too, its snout is longer than in its predatory ancestors. Both of these changes suggest that Tiktaalik was snapping up prey, perhaps from the air, rather than gulping down prey along with water.

Eventually tetrapods left the water and relied solely on lungs for respiration, abandoning their gills. By simply being, Tiktaalik not only proves that such major adaptive changes occurred but also reveals how this specific transition from water to land occurred.

This remarkable fossil shows us something else: that the transition was not an all-or-nothing affair. "Land" or "water" is too simple a dichotomy for the realities of ecosystems. There are many habitats—swamps, or shallow, plant-choked streams, or ponds that shrink seasonally and occasionally dry up—that require a range of adaptations to both land and water. Tiktaalik may have been at home in such places.

Tiktaalik's discovery made me reconsider the much later and opposite transition—from land back to the sea—which is documented in the excellent record of fossil whales. For example, Pakicetus is a 50-million-year-old species with whalelike teeth and a whalelike skull. Its skull possesses neither the anatomical adaptations for deep diving nor those for hearing underwater as well as modern whales do, suggesting Pakicetus used both land and shallow water environments. Most of its skeleton is still unknown, but the part of its pelvis that is known shows aquatic adaptations. Whether or not its limbs and feet were adapted for land or sea won't be known until a more complete specimen is found. Phil Gingerich of the Museum of Paleontology at the University of Michigan has found remains of Pakicetus and many other spectacular whale fossils. "We are looking for a skeleton of Pakicetus," he says with a grin, emphasizing the need for an intact specimen, "knowing that what we find might turn out to be quite different from what we expect."

Slightly younger Rodhocetus was better adapted to the water, with ankles like land mammals' that were connected to enlarged hind feet specialized for swimming. Its front feet retained land-adapted hooves.

From 45 million years ago, the fossil whale Dorudon had a less mobile (more fishlike) neck, front legs modified into flippers, vestigial hind legs and a powerful whale tail. Dorudon shows that foot-propelled swimming had been superseded by the tail-propelled swimming that characterizes modern whales. The features of these three species—plus those of a dozen other related species—can be used to sketch out the way in which land species returned to the sea and reevolved their aquatic adaptations, eventually evolving into whales.

Both transitions, water-to-land and land-back-to-water, occurred in a mosaic fashion and quite possibly used those intermediate habitats to which Tiktaalik is adapted. In fish and in whales, first the shape and design of the head evolved, then the forelimbs and finally the hindlimbs and tail. Are these parallels meaningful or simply coincidental? Did other lineages preserved in the far north evolve from a fishy life to a tetrapodal one in another way? Only more analysis and more fossils will tell.

Finding a missing link is a life's ambition for many paleontologists, often taking years of hard work, travel to remote regions and more than a generous dollop of luck. The aftermath of finding a missing link is more subtle than might be supposed. The paleontological record will always be sparse compared to the total number of creatures that ever lived, because fossilization is a very rare event. Millions of animals are born and die every day, but only a few of their bodies find habitats suitable for fossilization and preservation. Of those few creatures that die in the right place at the right time, many are preserved in places so thinly inhabited by human beings that no one who could recognize the fossil for what it is will ever see it. Not only does an organism have to be fossilized, but it must be found and recognized by a trained eye to add to the sum of scientific knowledge.

Although the discovery of a missing link is cause for celebration, it is also cause for more and deeper studies. Ironically, even as one link is found, two new missing links are "created"—one the immediate ancestor and one the immediate descendent of the newly found creature. But slowly, as discoveries proceed, paleontologists are able to compile an ever-clearer record of the evolution of life on Earth. 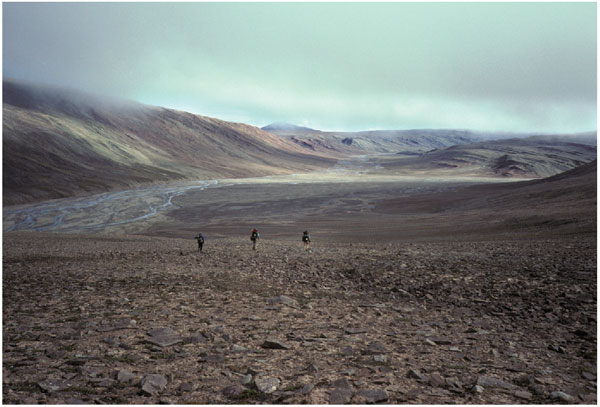 The discovery of Tiktaalik will encourage paleontologists to continue their intrepid searches in far-flung areas. With luck, its existence may spark others to rethink their position, too. Intelligent design advocates and creationists claim that too many links are missing for evolution to be credible; they see only the abrupt appearance of new forms created by an Intelligent Designer. Stephen Meyer, director of the Center for Science and Culture of the Discovery Institute, asserts that "the transitional life forms that ostensibly occupy the nodes of Darwin's branching tree of life are unobservable...."

The highly observable Tiktaalik is exactly the sort of transitional form that Meyer maintains does not exist. The fossils are real and solid evidence that you can hold in your hand. If you are willing to take the time to study their anatomy, you can see for yourself the evolutionary adaptations that were made over time. This ancient fish mutely tells a story of mosaic changes, of piecemeal adaptation to a new ecological niche. It joins myriad other "found links" that document transitions from one type of creature to another or from one habitat to another. Together these found links form a stony edifice in support of evolutionary theory. 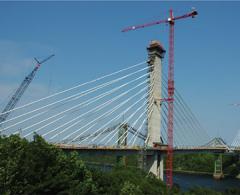