Of the 12 men who have walked on the moon, the last to set foot there, Harrison (Jack) Schmitt, is the only one with scientific training (he has a Ph.D. in geology). He has seen and done things most scientists only dream of. Schmitt's work on the Moon in 1972 ranks as one of the most exciting and productive episodes in the history of exploration. His memories of the three days he spent in the Valley of Taurus-Littrow are a priceless treasure trove of scientific and aesthetic insights. Unfortunately, those experiences are not the subject of his new book, Return to the Moon. 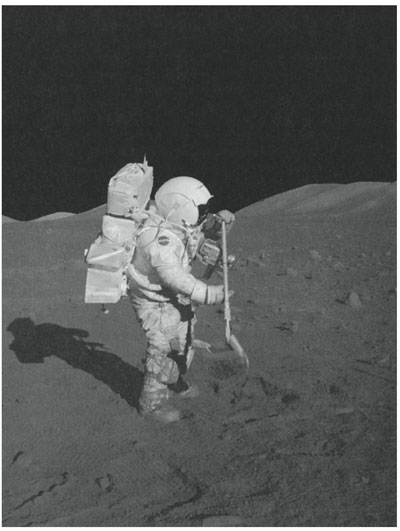 Instead, the volume is structured as a legal brief, in which Schmitt makes the case for returning to the Moon to mine the isotope helium-3. He claims that because fossil fuels are limited in supply and because their extraction and use harm the environment, our rapidly industrializing world requires new sources of energy. The ultimate solution, he suggests, is the generation of power by nuclear fusion—not of deuterium and tritium, as is usually proposed, but of deuterium and helium-3.

This reaction, which does not produce any fast neutrons, is clean and nonpolluting. There are, however, two drawbacks to its industrial use. First, the fusion of deuterium and helium-3 is very difficult to start and sustain, requiring roughly an order of magnitude more energy than the fusion of deuterium and tritium. Second, there are no plentiful stocks of helium-3 on Earth. Although the isotope is found naturally as a trace component in reservoirs of natural gas and also as a decay product of tritium (making our stockpile of nuclear weapons the best current terrestrial source), there is not enough helium-3 on our planet to support commercial power generation through fusion.

Enter the Moon. Because the Moon has been bombarded for billions of years by solar wind, which consists largely of ionized hydrogen and ionized helium, helium-3 is available in the dust of the lunar surface. Even there, however, helium-3 is present only in concentrations between 10 and 20 parts per billion. Hundreds of millions of tons of lunar soil (more properly called regolith) must be mined and handled to extract a ton of helium-3. Schmitt has looked at this problem in some detail, and he outlines a plan for mining helium-3 on the Moon to feed a commercial industry for generating power here on Earth.

After a brief introduction and a short discussion of the legacy of Apollo, Schmitt considers the future of energy production on Earth, concluding that all of the various proposed alternatives to fossil fuels have drawbacks. However, he maintains that mining the Moon for helium-3 is a viable solution to our energy problems.

Next Schmitt surveys the economics of rocket launches, the economics of fusion power and the geology of lunar helium, covering the composition and state of the rocks and soils of the Moon in some detail. He then describes possible strategies for the mining and production of helium-3 and suggests how to organize the effort. Because helium-3 is such a minor constituent of the regolith, mining it produces valuable by-products in abundance, particularly solar-wind hydrogen, which could be used to fuel an Earth-Moon transportation infrastructure and to support human life at the lunar outpost.

Schmitt then devotes two chapters to his idiosyncratic take on how NASA should be reorganized to regain the management prowess lost since the end of the Apollo program. The material on restructuring NASA consists largely of the text of e-mails that Schmitt sent to various members of the Bush administration in 2001—before the loss of the space shuttle Columbia precipitated a detailed examination of the goals of America's space program, resulting in the new Presidential Vision for Space Exploration in 2004.

Next Schmitt outlines his recommendations for lining up investors in a commercial operation for mining helium-3 on the Moon. Schmitt believes that for his plan to be successful, it must attract considerable private-sector investment. Would such an endeavor be legal? Space law regarding lunar resources is unclear. Nonetheless, Schmitt is convinced that existing treaties permit lunar economic development, particularly if it is carried out not by national governments, but by a user-based international consortium like those developed to manage communication satellites.

The next-to-last chapter touches on the value of humans in space. The book then concludes with the thought that a private effort to mine the Moon for helium-3 could not only solve our energy problems but also open the door to human settlement of the solar system.

Exactly how one takes all of this depends very much on one's personal predilections and how one views the track record and credibility of people promising commercial fusion power. The traditional comment on this field is that commercial fusion power is 10 years away—and has been since the middle of the past century. And as noted above, the simplest fusion reaction, deuterium-tritium fusion, has yet to come close to breakeven (to producing as much energy as is needed to start the reaction), despite being an order of magnitude easier to achieve than the fusion of deuterium and helium-3.

Some other criticisms are that Schmitt is not clear as to what role NASA should play in his scenario. Any involvement on NASA's part would appear to be only tangentially related to the new Vision for Space Exploration, which has been adopted as national policy by both the executive and legislative branches. Also, Schmitt discusses and interprets the geology of the Moon, the organization of the U.S. government's space program, space law and private-sector involvement in space through his own lens. Many of these issues are subjects of active debate, and those who wish to understand the wide scope of arguments being made should consult other books for different perspectives.

The concept of a book as a legal brief has a long and distinguished pedigree in science. In Schmitt's own field, Charles Lyell's Principles of Geology (1830) comes closest to such status, being primarily an extended brief supporting the gradualist, Huttonian model of the evolution of the Earth. Darwin took a copy of Lyell's Principles with him on the voyage of the H.M.S. Beagle. Will astronauts returning to the Moon carry a copy of Schmitt's book?

A Plan for Preserving Civilization