Lessons in the reach of social media

I’m not sure if it’s my age, my antisocial nature or both, but I am somewhat bemused by social media. I recognize the importance of Facebook, Twitter and the like, especially for media such as American Scientist, but I have previously participated only reluctantly. Confession: American Scientist’s page was the first (and last) thing I ever “liked”; I had to in order to be an administrator. Perhaps that’s why the impact of the November–December 2012 cover on Facebook visits so thoroughly caught me by surprise. 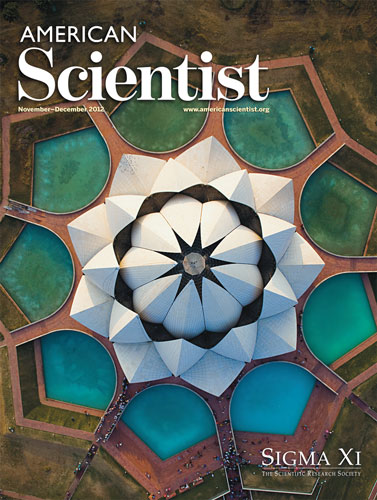 To refresh your memory, that cover image is a bird’s-eye view of the Lotus Temple in New Delhi, India—a spectacular concrete construction that serves to introduce the feature article, “Can Concrete Be Bendable?” On October 16, 2012, we posted an announcement on Facebook of the availability of the November–December issue at American Scientist Online. As is the case with each issue, the notice was accompanied by an image of the cover. Two weeks later, the cover had been discovered—big time!

During the week spanning October 31–November 6, the “reach” of the magazine’s Facebook page increased by more than 4,000 percent to 83,039 unique individuals, and when their “friends” are included, we have a potential reach of 1,095,265 people. That’s a lot of eyes. From the comments made about the cover, the source of the enthusiasm became clear: The actual name of the building is the Bahai’i House of Worship, and nearly all of the post’s fans were Bahai’i. Honest, this was not intended as a publicity stunt.

It’s actually been fascinating to watch this phenomenon unfold, and I am now conversant with a number of Facebook statistical terms, such as the aforementioned “reach” and other data such as “engaged users,” “talking about this” and “virality.” So far, 7,590 users have “engaged” with the initial post by clicking on it, 5,552 have “talked about” it (1,607 “shared”), and 70.43 percent of those have created a story based on it (hence, it went “viral”). Those numbers are all at least two orders of magnitude higher than the historic second-best post.

While I’m divulging details about the trail of crumbs that Facebook users leave, I’ll tell you a bit more about those who visited 10/31–11/6 and were counted as “reach.” About 54.2 percent were female. Most speak English (4,655 the U.S. analog and 733 the U.K. analogue), but Portuguese ranked second, at 643. It seems a lot of Bahai’i live in Brazil—in particular, 196 in Juiz de Fora, 56 in Belo Horizonte and 34 in São Paulo. Other top nations included, in order, Canada, Germany, the United Kingdom, India and Australia. Cochabamba, Bolivia, outreached the U.S. president’s hometown of Chicago, Illinois. The top age category for “reach” was 25–34, but puzzlingly, the 55–64 crowd out-talked them in “talking about this.”

Of course, I’m somewhat skeptical of just how solid such numbers are. Geography is inferred from IP number, and the AOLs of the world confound those data. Language comes from the default browser setting, and we do publish in English, so people presumably read in English. Personal data such as gender and age are based on the profile users create when they sign up for Facebook, and not everyone shares such information. (I sure don’t!)

Still, I’m impressed by how diverse this world made small by the Internet actually is. And I do hope our new Bahai’i friends will stop by again soon.