An interview with Nicholas Schiff about a continuum of brain activity.

Sometimes in science, results that don’t seem to make sense point the way to a gratifying insight. As a young man lay in bed, writhing and still barely conscious two years after a close escape from drowning, his mother gave him a small dose of the sedative zolpidem to help him rest. To her amazement, instead of becoming quieter, he awoke, recognized her, and even tried to speak. This case and others like it have fascinated Nicholas Schiff (below), the Jerold B. Katz professor of Neurology and Neuroscience at Cornell University’s Weill Medical College. Recently, Schiff talked with Sandra Ackerman, senior editor of American Scientist, about the hidden brain activity he thinks may be taking place in some patients who appear unable to respond.

News stories about the results of a major stroke or trauma to the brain seem to use a bewildering variety of terms to describe the patient’s medical condition: coma, unconsciousness, vegetative state, and so on. How many different levels of consciousness really exist in the human brain? 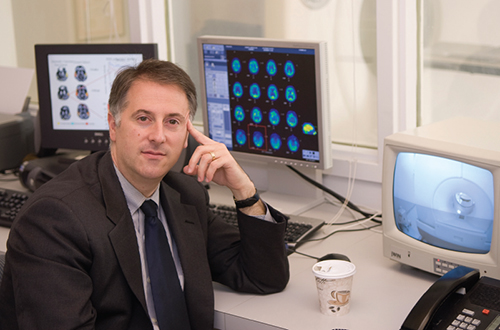 Many—but for the purposes of this discussion, we can think of consciousness as a spectrum. At one end is our everyday consciousness, and at the other is total unconsciousness, as represented by coma. Actually, the term “coma” covers two very similar states: One is the kind of coma that results from a severe head injury or cardiac arrest, and the other is the state induced in a hospital setting by means of general anesthesia.

So anyone who has had general anesthesia has been in a coma?

Yes, general anesthesia is nearly identical to what we might call “natural” coma. At the other end of the extreme is normal consciousness, and we have a continuum of states in between. For example, “vegetative state” doesn’t differ much from coma in terms of function, except that a person in a vegetative state has periods of time when the eyes are open and periods when the eyes are closed. A patient in a vegetative state doesn’t show any response to stimulation or any evidence of purposeful movement.

What has happened over time is that as more and more people survive very severe brain injuries, we see a wider range of preservation of brain function in patients who all appear to be in a vegetative state. And we have discovered that some patients who appear this way really aren’t anything like vegetative, in terms of their preservation of brain function and capacity. These patients have been misclassified as being in a vegetative state simply because they were physically unable to respond to a stimulus, but they were aware of it.

The next major point on the spectrum is the minimally conscious state, in which people show clear evidence that they have some level of awareness: They may track a moving object with their eyes, they may give you a thumbs-up or follow some other command, or they may even communicate inconsistently with words or gestures.

Then, typically, the next level that gets labeled is something called confusional state, where people can communicate but they’re not oriented to what happened to them or where they are in time or other aspects of their personal history. After confusional state you have a range of cognitive capacities following recovery from coma, but they’re all measurable on standard measurements that anybody would be tested on.

Those are the coarse-grained separations that are most standard, but of course there are many other divisions and flavors of consciousness that have been described.

And the conversational term “brain-dead,” where does that come in?

Brain death is on the other side of coma, with no detectable electrical activity at all. It turns out that isn’t the best way to diagnose brain death—the best way is to determine, by means of a brain-imaging study, that the blood flow to the brain has stopped. But the important thing is, brain death is death of the brain. It’s irreversible.

I can imagine that the family members of someone who has suffered a traumatic brain injury could find it hard to take in all this information suddenly, in the midst of an an emergency.

Right. That’s how it happens: They suddenly have to become educated in a whole medical field, at the worst possible time.

Tell me about your recent paper, in which you and your colleagues suggest the unconscious or minimally conscious brain may harbor some capacity that is activated by zolpidem.

What’s most important about this paper is that all of the patients discussed, even though they had completely different kinds of injury—one had a severe traumatic brain injury, one had a near-drowning injury, one had multiple strokes—all looked nearly identical in terms of their brain electrical activity before they got the drug. We discovered we had very strong evidence that the patients were essentially oscillating at a very specific low-frequency range of activity, on both sides of the brain, and that it was highly synchronous—and the frequency of the oscillations suggested a precise mechanism that could underlie it. This model does a lot of work for us, because it fills in some pieces for thinking about how the injured brain may not function well, but yet still harbor the capacity to do a lot more.

So this study, even though it included only a small number of patients, was like a tiny window through which you may be able to see a much larger model of the unconscious brain?

Yes, and part of the reason I think that’s true is that the theoretical framework we’re using had been proposed even before these studies. This framework not only links together these ideas about structural brain injury but draws direct comparison to what happens in the human brain under general anesthesia—which we do know a lot about.

In the healthy brain, the drug zolpidem acts as a sedative—in fact, in its prescription form, it is used as a sleep aid by millions of Americans. Yet in your brain-injured patients, zolpidem has actually restored some measure of consciousness. How do you account for such dramatically opposite effects from the same drug? 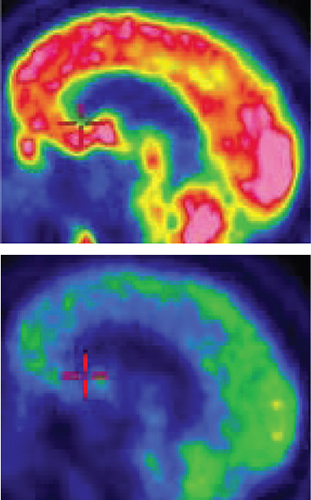 When anybody goes under general anesthesia, in the initial phase they get a little tired and quiet, and in the second phase they have what we call paradoxical excitation—that is, they get agitated. That is the model for thinking about the zolpidem response: that second phase, when the brain goes into paradoxical excitation. These injured brains that have been quiet start to turn on and sort of catch a ride on a wave of excitatory activity, and then as the brain becomes more engaged, many different systems come online, and then there’s more brain activity and it’s powering a brief window of much higher level function.

What happens after initial treatment?

The effect of zolpidem wears off gradually, over several hours. Interestingly, though, in one of the patients we studied, who was receiving a dose of zolpidem three times a day, every day, there were slow accretions of baseline improvement. So there’s evidence for carry-over as well. That patient started off in a minimally conscious state, but now his condition is improved even when he’s off the drug.

Would you compare the effect of zolpidem on the unconscious brain to, say, kick-starting an engine?

No—surfers catching a wave is the better analogy, because once that wave rolls in to shore, they’re not riding high on it any more. It’s not a matter of getting the engine started and then the car just runs; as the drug wears off, the patient’s function goes down—even for the ones who have gotten an accretion of improvement over time.

If there were one fundamental point that you would like the general public to understand about traumatic brain injury, or one specific piece of advice to give, what would it be?

The important thing to know is that when there’s a diagnosis of brain death, the patient is dead. I would say that it’s very important to express your wishes ahead of time and to have designated somebody who can make decisions on your behalf. An advance directive is important, but choosing someone to have healthcare power of attorney—somebody who can interpret the complexity of real-world situations that may arise—is much more important.

That’s a useful reminder, because people almost never think about these things if they don’t have to.

You hold faculty appointments at Weill Cornell Medical College both in neurology/neuroscience and in public health. What is the public-health component of your work?

Mostly ethics. But I’m not the ethicist; I work with an ethicist, Dr. Joseph Fins, so that we can translate the science into ethics properly. But even more, my work focuses on trying to figure out mechanisms of recovery and therapeutics and diagnostics. That’s really the thrust of what I do.

Where do you see your brain research leading from here?

We’re testing the general ideas from our paper in a much larger group of patients, using many different measurement tools that can assess the validity of other specific predictions of our model. We’re trying to validate or invalidate the model so that we can have a predictive understanding of. With that in mind, we’d like to refine our diagnostic armament, and, most importantly, develop novel therapeutics—and effective ones. 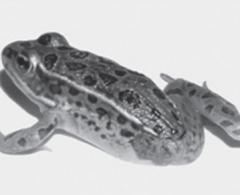