People are left to fend for themselves in deciding what to believe about media claims. Is there a better way?

When the National Academies of Sciences, Engineering, and Medicine held their first Arthur M. Sackler Colloquium on “The Science of Science Communication” in 2012, the resulting series of papers recognized and addressed the growing concern that relevant science was increasingly not informing public action and policy. Science communications scholar Dietram Scheufele of the University of Wisconsin-Madison, who has been involved with the Sackler Colloquiums since their inception, says, “Our key communication problem is that we’re not getting the best available evidence heard for what is ultimately a policy debate, and not a scientific debate.”

At the time of that first colloquium, the focus was often on individual practice and messaging—for example, how to talk about climate change with a particular audience. But even when many science communicators act on best practices at local to international levels, getting an evidence-based message across becomes a challenge when louder voices still use divisive rhetoric and play into myths. On the internet, combatting misinformation has still focused on interventions where the onus is on the individual, such as offering a check button on a Google search, marking questionable content on YouTube or Facebook, or teaching methodologies to identify fake news.

Although competency in media consumption is important, Scheufele contends that it is only part of the solution. “Economic incentives for media systems have very little to do anymore with providing the best available information to people,” says Scheufele. “The macro incentive—the societal and economic incentives—for the media system are at odds with what we’re trying to do at individual levels.”

The research papers resulting from the third Sackler Colloquium on the Science of Science Communication, including a paper on misinformation by Scheufele and his coauthor Nicole M. Krause, were published recently in the Proceedings of the National Academy of Sciences of the U.S.A. These papers, along with a 2017 National Academies report called Communicating Science Effectively: A Research Agenda, call for a “systems approach” to science communication. Rather than leaving individual science communicators to fend for themselves, the reports advocate for larger strategies to inform media regulations and to organize group action to address science issues of concern, such as vaccine hesitancy, safety issues regarding self-driving cars, or the need for public dialogue about gene editing.

“We keep coming up with a lot of interventions, so that people finally believe that genetically modified organisms are as safe to eat as traditionally grown crops,” says Scheufele. “We know this from 1,600 peer-reviewed studies and from National Academies’ reports. But we act as if we’re the only ones communicating, as if there has not been 20 years of messaging from Greenpeace about Frankenfood. For instance, when the National Academies’ report comes out, it creates a whole bunch of buzz on social media, Twitter, and so on. It has a measurable impact. But that impact is dwarfed by a single tweet against GMOs from Bernie Sanders.” To truly curtail misinformation, its context target audience must be considered.

Understanding emerging media, populations that are underserved by current science outreach and journalism, and the information system in which they operate is essential to getting things right. “Maybe we’re all a little bit susceptible to misinformation,” Scheufele says. “But if certain groups are more susceptible, then we see widening gaps. Curators of knowledge, such as journalists, tend to write for outlets that are read by people who are richer and already more educated. The curation happens for those who can afford to go beyond the paywall.” These gaps will continue to widen without interventions in society and media. And the stakes couldn’t be higher: The only way to ensure that effective policies are enacted is to have informed citizens select them.

These colloquiums have concluded that a systems-based approach will require ongoing research partnerships as part of the solution. The National Academies are building such partnerships. For example, Brendan Nyhan of the University of Michigan is leading research with the Vermont Department of Health on developing effective vaccination communications—work funded by the National Academies through its program called Building Effective Capacity for Science Communication Partnerships.

“The third colloquium is the catalyst for taking what was research colloquia and utilizing them to build partnerships between research and practice,” Scheufele says. “The National Academies of Science, Engineering, and Medicine now has a standing committee on communicating science effectively.” That committee met for the first time this past December in Washington, DC. The next Sackler Colloquium will be held in April at the University of California, Irvine, and will tackle the theme of Misinformation about Science in the Public Square. 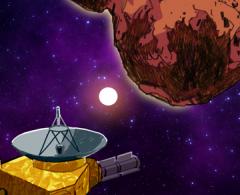 The Edge of the Solar System