Cosmology is built out of physics. As physics becomes more unified, sophisticated and inclusive, so does the reach of cosmological thought, and eventually that of real experimental data. Modern cosmology began nine decades ago with Einstein's general theory of relativity; models of our expanding universe based on that theory connected with Edwin Hubble's observations of real galaxies in the 1920s. The addition of quantum physics in the following decades extended those ideas to include the behavior of the early universe when most energy was in the form of radiation. This Big Bang theory was confirmed with the discovery in the 1960s of vestiges of this radiation, still shining from all directions in the sky, and with corroboration of the predicted primordial abundances of elements. Around 1980, the importation of ideas of symmetry breaking from quantum field theory led to the concept of cosmic inflation, a process that both kick-started the Big Bang's expansion and introduced small quantum fluctuations, which eventually became galaxies. This extraordinary synthesis is well on its way to being precisely confirmed by detailed observations of the cosmic microwave background that faithfully record those fluctuations.

In Many Worlds in One, Alex Vilenkin offers an engaging personalized tour of cosmology, sharing his intimate view of developments in the field over the past quarter of a century. Cosmologists have a daily urge to explore in ways that sometimes seem to take them beyond the edge of practical common sense, but by clearly explaining what they are thinking and why, Vilenkin makes it possible for the reader to accompany them. He enlivens the scientific narrative by including colorful sketches of friends, colleagues and the heroic figures of earlier generations. Indeed, the book recalls the informal, lighthearted, inviting style of popular books by another Russian émigré physicist, George Gamow, who introduced the ideas of the Big Bang to a broad readership half a century ago.

"The search for other universes" referred to in the subtitle is mostly a search in the world of ideas rather than in any experiment or observation; certainly no data appear here from other universes! The ongoing fusion of quantum field theory with string theory, a quantum version of general relativity, now promises to remake and extend cosmology once again, this time into the metacosmology of the multiverse. In this larger arena, seemingly crazy ideas—a universe arising from nothing, lots of big universes fitting into one small one, properties of physics itself varying in many if not all respects from one universe to another—emerge naturally out of well-controlled mathematical arguments. Like some of the outlandish concepts of earlier generations, these proposals may eventually come under, and survive, real experimental scrutiny.

The emphasis here is on the biggest of big pictures. The ideas of string theory and inflation lead naturally to a generous and expansive view of everything, where zillions of versions of zillions of types of universes are being created all the time. Much of physics in any particular universe does not derive from any mathematical principle (as many physicists have long hoped it would) but by random selection from many choices in this large ensemble. In the vast "landscape of string theory," a few places form universes that become both big and hospitable—in the sense of allowing interesting things to arise, such as atoms, molecules and life. (In much of the landscape, quarks and electrons have masses that do not even allow stable atomic nuclei to exist, much less any biochemistry to happen. At an opposite extreme, a tiny pocket of universes may be so like one another, and so like ours, that you and I, existing in multiple copies, could never notice the subtle differences between the various versions of ourselves.) The extravagant multiplicity of possibilities may be dizzying or disturbing to some and comforting to others, but in the end, it's just another physical hypothesis, like the other cosmologies that came before.

Where does the multiverse idea lead? It is not clear what shape cosmology will take as the fusion of quantum strings, quantum fields and gravity becomes a mature branch of physics. Quite possibly, space and time will themselves end up being derived as "emergent" concepts rather than fundamental ones. The many worlds may really exist but in some kind of mathematical space we do not know how to describe yet. As of now, it is not even known how to define probabilities of universes, much less calculate them. These ideas near the edge of understanding should be treated as provisional until they are confronted in some way with real data.

It is amazing to step back and look at what has been achieved in the past century with the bold approach of scientific cosmology: a quantifiable and intelligible account of our universe that unifies the physics of the very large with the physics of the very small and survives a battery of precise, deeply probing experimental tests. Given the solid factual basis of what has become standard cosmology, it does not seem too ambitious to make a few straightforward extrapolations and deduce a much larger universe of universes behind it. We can even predict new kinds of things to look for to test some of these models; for example, gravitational-wave observatories now in development may have the ability to "hear" spacetime vibrations from the first emergence of space and time, or from cosmic superstrings left over from that era. Further experimental clues may come from study of the mysterious phenomena of dark matter and dark energy. In some leading models, the densities of dark matter and dark energy are random variables in the multiverse ensemble, their properties determined by selection. These models make predictions that can be tested, either by direct detection of dark matter in the laboratory or by precise studies of the history of cosmic expansion that expose the nature of dark energy. So no matter how crazy they might seem, these mind-boggling concepts count as scientific ideas.

Even if we never figure out any more about the beginning of time or our place in the great landscape of multiverses, observational cosmology has already quietly revealed a profound property of our universe: the evolution of complexity from a very simple initial state. That is, direct data show that the Big Bang in the distant past was a simple, smooth system extremely close to (local, microscopic) thermodynamic equilibrium. This "heat birth" is much like the "heat death" that thermodynamics textbooks used to scare us with, except that it happens at the beginning and not at the end of things.

Only much later, after many millions of years, did richly detailed structure emerge (via an apparently entropy-defying information growth enabled by gravity and the cosmic expansion) to become galaxies, stars, planets and life. All of those interesting things came to pass well after the Big Bang, from just the physics we already know about. Moreover, that transformation happened in plain sight: Deep telescopic observations, looking far back in time, will progressively unveil a direct view of the cosmic equivalent of the origin of life. It would be fair for cosmologists to claim that they have already solved in principle one of the greatest mysteries of creation—how we got here—and that they now merely await better telescopes and better computer simulations to resolve the details. 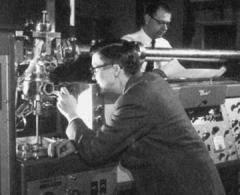