Down Syndrome, the Immune System Disorder

Comparing protein levels in blood samples from those with and without an extra 21st chromosome suggests that the underlying pathology is immune dysfunction.

Several years ago, cancer researcher Joaquin Espinosa started down a completely new research path: studying Down syndrome, the most common intellectual disability. Thomas Blumenthal, who was at the time the executive director of the Linda Crnic Institute for Down Syndrome at the University of Colorado, recruited him to work on an intriguing question: Why is it that people with Down syndrome are protected from most solid tumors—including breast cancers, prostate cancers, and colon cancer—but have higher rates of leukemia and blood cancers?

“Five years ago, I really didn’t have any clues as to why that would be,” says Espinosa, who recently succeeded Blumenthal as the executive director of the Institute. “Now, my team and I find ourselves studying a known tumor response in the immune system.” This question led him, Blumenthal, and their collaborators to upend the way we think about Down syndrome. Espinosa elucidates: “The public at large thinks of Down syndrome as a condition of the brain, but our studies are recasting Down syndrome as a condition of the immune system, which then goes on to have impacts on the brain and many other organs.”

Even though people with Down syndrome are less likely to develop hard tumors, they are diagnosed at higher rates with certain autoimmune disorders—such as celiac disease, Hashimoto’s disease, and type-1 diabetes—compared with the general population. These associations have been known for a long time, but are only now being understood. As the tools for studying proteins have advanced, researchers have started to fully appreciate the repercussions of having a third copy of the 21st chromosome. A paper recently published in Scientific Reports describes the team’s exhaustive investigation of the levels of more than 4,000 proteins in blood samples from 263 people, 165 of whom had that extra chromosome and 98 of whom did not, matched for age and gender.

A third copy of the 21st chromosome means that the proteins encoded on the genes from that part of the genome tend to be found at higher levels than in most other people and can have downstream effects on the levels of other proteins. “When we look at the 200 proteins that were statistically different between people with Down syndrome and those without, about half of those proteins are involved in control of the immune system, such as control of inflammation, response to bacterial infections, response to viral infections, and so forth,” Espinosa explains. “The study puts immune dysregulation at the top of the biological processes that are impacted by the extra chromosome.”

The Linda Crnic team’s proteomic analysis—a method of identifying and quantifying all circulating proteins—showed interesting differences between the two groups. Not only were levels of proteins encoded on the 21st chromosome 1.5 times higher than normal in those with Down syndrome—as would be expected for three rather than two copies of the chromosome—but also those elevated levels caused a cascade of signaling that resulted in much higher levels of certain types of proteins associated with the immune system. The signal amplification may explain how the extra copy of chromosome 21 can have such profound health consequences. Espinosa clarifies, “What we believe we’re observing here is a process of signal amplification from a few proteins on chromosome 21 that are master regulators of the immune system.”

Four proteins in particular, all encoded by genes on chromosome 21 and all known to be potent regulators of the immune system, had elevated levels in people with Down syndrome, according to a 2016 study in eLife by the same team. These four proteins belong to a type of immune system regulator called interferon receptors. Interferons are signaling proteins named for their ability to interfere with the replication of pathogens or tumor cells. Interferon receptors sense the presence of interferons and trigger a biochemical response.

“When you have more of these receptors, you’re hypersensitive to the presence of interferons, and that triggers another reaction in the immune system,” Espinosa notes. “What we found in the blood samples is consistent with the notion that a small increase—only 50 percent more—of these interferon receptors suffices to cause profound immune dysregulation.”

Some drugs that tone down the interferon response, such as JAK inhibitors, are already approved by the U.S. Food and Drug Administration, because they are used for other autoimmune disorders, such as rheumatoid arthritis. Clinical trials of these drugs are also underway to test their efficacy in treating additional autoimmune conditions. Espinosa and his colleagues next plan to study how these drugs could treat or alleviate risks and impairments associated with Down syndrome—not only those related to cancer but many other aspects of the condition as well.

The results of the study in Scientific Reports are consistent with the team’s 2016 findings in eLife. The earlier study looked at differences in levels of RNAs, the intermediate molecule between DNA and proteins, in isolated cells from people with and without Down syndrome. Espinosa says, “The key conclusion of that study was that most of the changes at the RNA level could be linked to a particular aspect of the immune system involved in defense against viruses and tumors. So the two studies agree on this immune dysregulation as a key event that is going on in people with Down syndrome.” This result laid the groundwork for looking at proteins circulating in the blood stream. 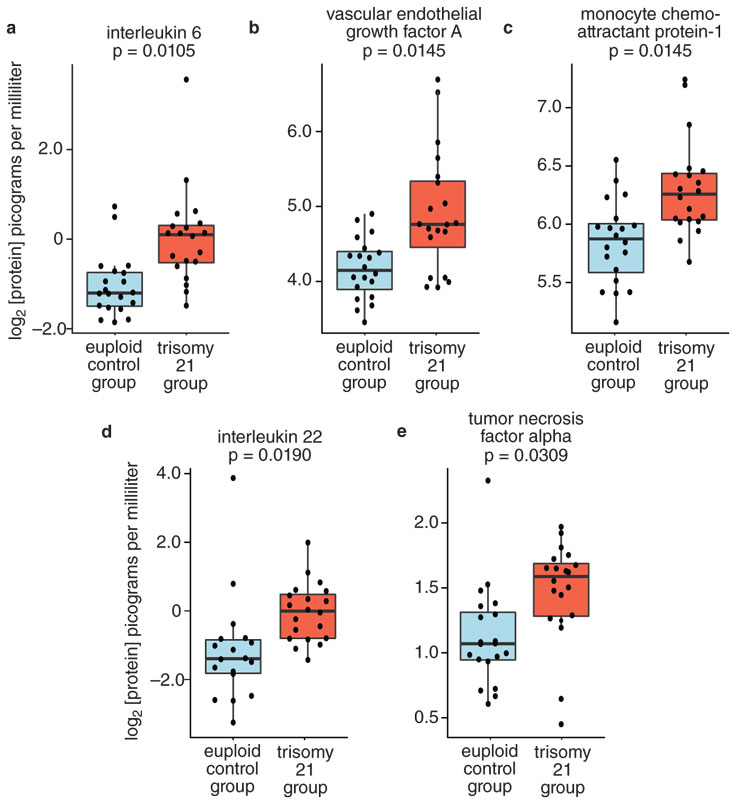 “Both studies also agree that different people with Down syndrome have different degrees of immune dysregulation,” Espinosa says. “Some have a very obvious autoinflammatory signature with many potent inflammatory proteins elevated in the blood; others, not so much.” The next step for their research is to parse out how this immune dysregulation might contribute to various aspects of Down syndrome: the cognitive impairments, the higher risk of autoimmune conditions, the congenital heart defects, the visual problems, and the hearing problems. Such a connection may not seem immediately obvious, but it makes sense to Espinosa.

“The immune system is throughout the body, including the brain, of course,” he notes. The underlying driver of the cognitive impairments associated with Down syndrome may be the changes in the immune system that Espinosa and his collaborators have identified.

He explains, “We know that when the immune cells of our brain, the so-called microglia, are hyperactivated, they can have harmful effects on other brain cells. When the immune system is activated, it produces all kinds of toxic molecules, compounds that are rare to find in a person unless they have been going through a strong immune response.”

So, these studies could lead to a broader advance in understanding brain disorders. Espinosa says, “We knew even before this work was published that people with Down syndrome have strong signs of microglia activation in the brain. We knew that they have brain inflammation. And there is a vast body of literature showing that the hyperactivation of the microglia can lead to cognitive impairment, even in typical people. For example, the microglia, when hyperactive, contribute to the development of Alzheimer’s disease and the death of neurons.”

And the implications go well beyond Alzheimer’s. The long-mysterious medical associations with Down syndrome—higher rates of autism, certain autoimmune disorders, and certain cancers, along with very low rates of most solid-tumor cancers—could all have connections back to immune system dysfunction. Understanding the biochemical mechanisms at work in people with Down syndrome could therefore have huge implications. Espinosa says, “My conviction is that our research is not only going to benefit people with Down syndrome, but also the population at large.” 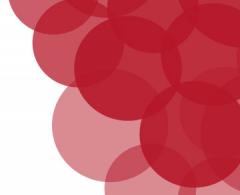