Phosphorus, a traditionally low-profile element is essential, as is nitrogen, to all living things. In various forms it is a component of DNA, a player in cellular energy transport and a building block in cell membranes and bone.

People acquire the phosphorus they need from food. For millennia, farmers replenished its supply in soil by spreading animal waste, human waste and plant remains as fertilizer, or by allowing floods and the phosphorus-laced sediments they can carry to reach croplands. That fed a cycle of use and replenishment of a relatively rare element.

These days phosphorus is more likely to come out of a sack, as a key ingredient in processed fertilizers containing nitrogen, phosphorus and potassium. Mined as phosphate-bearing rock in a handful of countries with supplies of decreasing quantity and quality, phosphorus is often shipped great distances before reaching farm fields.

The Global Phosphorus Research Initiative, led by Swedish and Australian scientists, estimates that the world’s readily available phosphorus supplies will be inadequate to meet agricultural demand within 30 to 40 years. Others predict shortages sooner or later. All seem to agree that phosphorus price increases seen recently on global markets will recur, and that they will likely hit farmers in the developing world hardest.

“Our current use of phosphorus is not sustainable,” says James Elser, an Arizona State University ecologist and cofounder of the newly launched Sustainable P Initiative on that campus.

The demand for phosphorus increased sharply in the mid-20th century with the success of the Green Revolution, when plant breeders successfully produced higher-yield versions of familiar field crops. Those higher yields required larger doses of fertilizer. An estimated 17 million tons of processed phosphorus will be used on the world’s farm fields this year, with demand only expected to rise, says Mark Edwards, a business professor also active in the new Arizona State phosphorus initiative.

The increase in the world’s population, an expanding global affluence and the resulting increased demand for more food, particularly meat, will only put more stress on the dwindling accessible supplies of phosphorus, Edwards and others say. So will the push to grow more biofuel feedstock as a substitute for carbon-emitting fossil fuels.

The fact that so few countries have phosphorus mines stirs more concern. About 90 percent of the world’s known reserves are located in or are controlled by five countries: Morocco, Jordan, South Africa, the United States and China. And China, which recently raised its tariffs on phosphorus, is expected to keep more at home. The declining quality, or purity, of known phosphate rock sources is only heightening anxiety. 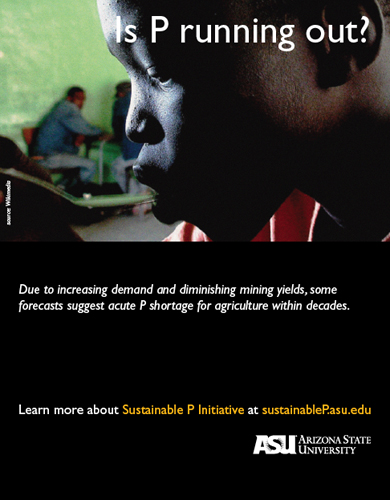 Scientific opportunities are emerging in response to the recognition that trouble may be ahead, which is one reason why Arizona State has launched its new interdisciplinary research and education program, Elser says. For one, he is not convinced the true supply of accessible phosphate rock is really known. “It’s not clear to me at all how hard people have looked. Are we really sure there isn’t a big reserve out there?” he asks.

In addition to firming up estimates of actual reserves, research is needed to devise better ways to capture and recycle the huge amounts of phosphorus now wasted, whether that be in the water-polluting fertilizer allowed to wash off from agricultural fields; the inedible remains of crops, such as stalks and stems; or human and animal waste. Dana Cordell of the Institute for Sustainable Futures at the University of Technology Sydney and her colleagues in 2009 estimated that the amount of phosphorus that people consume in food is only one-fifth that being mined, suggesting huge amounts simply escape. “We’ve got to figure out a way to recapture nutrients being wasted and get them back to agriculture,” Elser says.

Additional plant breeding efforts might help. “We have colleagues here working on bioengineering approaches that could help plants be better at exploring the soil, better at acidifying the soil and better at grabbing phosphorus,” Elser says.

David Vaccari, an environmental scientist at Stevens Institute of Technology in New Jersey, is among researchers worldwide trying to raise the profile of dwindling phosphorus supplies by writing about it. Ultimately, Vaccari says, growth of the world’s population must slow in order to eliminate the risk of shortages of phosphorus and other natural resources.

In the nearer term, Vaccari says, he is glad to see that concerns about phosphorus supplies are influencing public policy in some places, including Sweden. A couple of cities there are requiring all new toilets to be urine diverting, so that wastewater can be captured for reuse. Cordell reported in Global Environmental Change that some urban areas in Pakistan and elsewhere in Asia are fertilizing vegetables grown in urban areas with wastewater.

“Here in the U.S., it’s been a little slow to catch people’s attention,” Vaccari says. 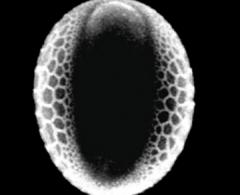 Getting a Fix on Pollen Folding