The two patron saints of the study of cognitive development (which involves how thinking and knowledge change with age) are the Swiss psychologist Jean Piaget and the Russian psychologist Lev Vygotsky. Both were born in 1896, but Piaget lived and wrote into his 80s, whereas Vygotsky died of tuberculosis at age 37. Both advocated forms of constructivism, the theory that children actively construct knowledge, rather than being passively molded by experience (as in behaviorism) or programmed by biology (as in nativism). However, Piaget viewed cognitive development as a product of the individual mind, achieved through observation and experimentation, whereas Vygotsky viewed it as a social process, achieved through interaction with more knowledgeable members of the culture.

Developmental psychologist Katherine Nelson is an apostle of the Vygotskian approach, known as social constructivism. She is opposed to the currently popular descendant of the Piagetian approach known as theory theory, which holds that children construct causal conceptualizations of different domains of knowledge ("folk theories") using the same cognitive processes that scientists use to construct scientific theories (that is, children think like little scientists).

Nelson contends that theory theorists such as Alison Gopnik commit the psychologist's fallacy—attributing one's own thought processes to others—and thereby forsake one of constructivism's central insights: that children's cognition is qualitatively different from that of adults, not simply quantitatively inferior. In other words, children don't just know less, they think differently.

In her new book, Young Minds in Social Worlds, Nelson also argues that computational theories of mind (based on the premise that the mind operates like a computer) are inadequate, because the ultimate function of human cognition is not to process abstract information, but to interpret experience and share cultural meanings with others. She criticizes evolutionary cognitive psychologists such as Steven Pinker and nativist developmental psychologists such as Elizabeth Spelke for allegedly overemphasizing genetic influences on development and underemphasizing the importance of social and cultural influences. And Nelson draws on developmental systems theory to describe development as a complex, interactive, dynamic process in which cognitive structure gradually emerges, rather than being built into the genes or copied from the environment.

The bulk of the book reviews cognitive and language development during the first five years of life, seen from Nelson's theoretical perspective. Her target audience appears to be other developmental psychologists, as she refers to many theories and studies without giving much explanation for readers not already familiar with them. Developmentalists, however, will not learn much factual information because she presents no new research. Instead, what they may gain is an appreciation of Nelson's theoretical perspective on development, which she calls experiential (to emphasize the importance of the child's individual experience).

Nelson suggests that a child's consciousness develops in levels that correspond to the stages proposed by cognitive neuroscientist Merlin Donald for the evolution of the human mind. Nelson presented this model in more detail in Language in Cognitive Development (1996), so those who have read that book will find it familiar.

In Young Minds in Social Worlds, the early chapters on cognitive development in the infant and toddler ages are uncontroversial and, frankly, unmemorable. The middle chapters on the acquisition of language and symbols are much more interesting, perhaps because here Nelson can draw more on her own research. She is critical of current theories about word learning that assume that children have the same conceptual structures as adults and simply need to map the words that they hear onto the concepts that they already have. Nelson argues convincingly that children gradually construct concepts through linguistic interaction. In other words, children do not simply match labels to pre-existing categories, but rather use linguistic cues to bring their conceptual boundaries in line with those shared by their linguistic community.

A corollary of this position is that production may sometimes precede comprehension (a reversal of the usually assumed sequence): Children may imitate the use of a word in a particular context and only gradually acquire a context-independent understanding of the meaning of the word. In Nelson's view, which is indebted to the psycholinguist Dan Slobin, language is less than a necessary ingredient for thought itself (that is, nonlinguistic thought is possible), but more than a neutral vehicle for the expression of thought. Language is needed for sharing thoughts, and those thoughts are inevitably shaped by the particular language used.

Nelson raises the interesting question of why children seem to understand symbolic representations (for example, words, which do not resemble their referents—onomatopoeia excepted) before they understand iconic representations (for example, scale models, which do resemble their referents), even though the former relation, being arbitrary, would seem harder to comprehend. Although elsewhere she criticizes nativist explanations ("it's built in"), here she suggests that perhaps humans have a specific evolved capacity to understand symbols but must learn to interpret icons. Perhaps, but I think it's more likely that icons are challenging because, as Judy DeLoache has observed, they have a dual nature, being both representations and objects in their own right—for example, a scale model can be interpreted as a toy. This conflict creates greater demands on executive functions than words do, because words have no meaning except as representations.

Nelson stumbles a few times in the later chapters on cognitive development in preschoolers. She writes that "young children tend to remember the gist of a complex situation and lose track of details." But in fact, research based on Charles Brainerd and Valerie Reyna's fuzzy-trace theory finds exactly the opposite: Children rely more on memory for verbatim details, and adults rely more on memory for gist. For example, when asked to remember a list of words that cluster around a theme, adults are more likely to erroneously include a word that is semantically related to the words supplied, whereas children are more likely to incorrectly include a word that rhymes with a word actually presented.

Nelson criticizes research on children's theory of mind (their understanding of mental states) for overemphasizing one particular development during the preschool years: understanding of beliefs (that people can believe different things, including things that are false). But Nelson then does the same thing herself—saying, for example, that "competence in representational language is essential for entering the community of minds (and for solving theory of mind problems)." Nelson means that the maturation of representational language during the preschool years enables children to understand beliefs. However, she neglects the fact that children solve some other theory-of-mind problems much earlier. For example, 18-month-olds understand desires (that people want different things).

Nelson also argues that children's understanding of mind is not based on some sort of underlying theory, because "nothing guarantees that one person can correctly interpret another." But her argument misses the mark, because nobody claims that theories are guaranteed to produce correct interpretations. If theories did, science would be a lot easier! And despite her antipathy toward theory theory, she writes that "children's questions indicate that they are mentally instigating investigations of the causal structure of aspects of the world, both psychological and physical." That sure sounds to me like they're theorizing.

Nelson concludes by maintaining that cognitive development is not a process of individual internalizing of objective knowledge, but rather is a collaborative interpretation of subjective experience. However, she eschews the solipsism of postmodern relativism. She sometimes presents the obvious as profound, in such statements as "this view reflects the position that cognitive processes are an integral part of memory itself" and "this view resolves the issue of why thinking in a different language is different from thinking in a first language; it is different because the languages are different." She aims for a pragmatic and balanced account of development, which unfortunately sometimes feels vague and bland. She may be right, but her book is less fun to read than those of more provocative writers such as Steven Pinker. For a more engaging exposition of a similar sociocultural perspective, I recommend two books by Michael Tomasello: The Cultural Origins of Human Cognition (1999) and Constructing a Language: A Usage-Based Theory of Language Acquisition (2003). 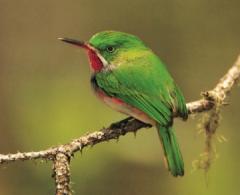