Image-processing software helps biologists tell which dolphin is which.

Before biologists can understand the movements and behavior of dolphins, they must know which animal is which. Luckily, adult bottlenose dolphins, Tursiops truncatus, have fingerprints of sorts: uniquely shaped dorsal fins. For decades, biologists have used photographs of fins to identify individuals in the wild. Image-processing software has sped up the procedure. Faculty and undergraduate students at Eckerd College in St. Petersburg, Florida continue to improve their open-source Digital Analysis and Recognition of Whale Images on a Network software (DARWIN), which debuted in the 1990s. And biologists keep finding new uses for DARWIN, Eckerd College computer scientist Kelly Debure explained to American Scientist contributing editor Catherine Clabby. 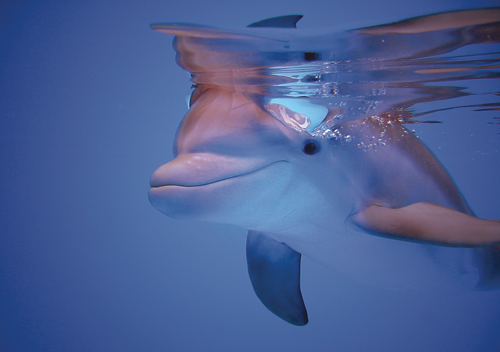 The dorsal fins of young dolphins are essentially unmarked. During childhood and adolescence the fins acquire identifiable damage marks from attacks, vigorous play, accidental collisions with obstacles, boat strikes and entanglement. These marks, primarily nicks and notches along a fin’s edge, mostly don’t change in adulthood.

How did biologists initially use photographs of dolphin fins?

Originally, everyone worked with film cameras, and biologists maintained physical catalogs of slides or print photographs of the animals. Researchers were clever about how they organized the images into categories, but they still could have a couple hundred images in one category of fin type. Someone had to manually flip through many pages to make an ID. 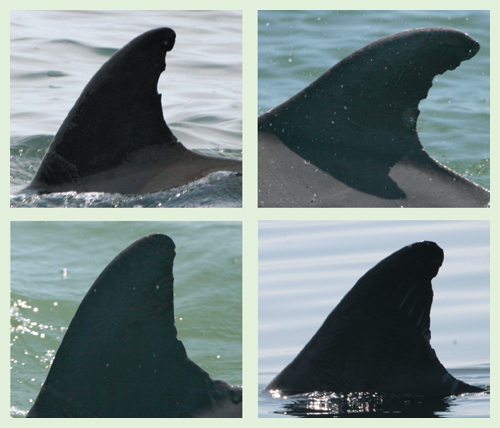 How does DARWIN work?

We originally used what’s called a centroid signature for encoding the outline. Imagine a dorsal fin as a big triangle. If we place a point in the center of the triangle and compute distances from that centroid to the edge of the dorsal fin at regular angular intervals, we obtain a list of distances that describe the fin shape. The centroid method worked pretty well—especially with odd-shaped fins. As it was used, however, it became clear it was susceptible to variation in user input of fin edge length. So we moved to what’s called a chain code representation.

Starting at a point at the beginning of the leading edge of a fin, we now compute the angular direction to subsequent points along the fin edge at regular length intervals. Changes in these directions occur at features of interest, the fin tip and various nicks and notches along the edge. We use the feature points to solve for a transformation matrix that allows us to map one fin triangle to the other but maintains the original measurements of ratios of distances between points. This mapping compensates for inevitable variation in the pose, or the view, of a given fin visible in images of swimming animals taken by people on moving boats. A corrected image is compared with archived records to present biologists with likely matches. 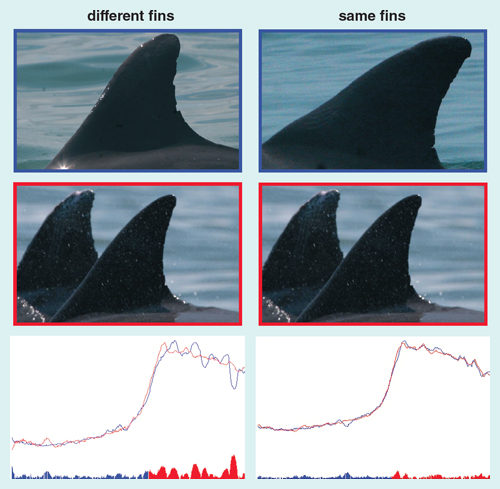 DARWIN is posted on Google Code. Why is it open source?

So many new problems addressed by computer software are just a different twist on an old challenge. Why reinvent the wheel every time? If code is modular and reasonably well documented, making it available prevents others from wasting time implementing similar components. They can focus on the unique aspects of their tasks. The undergraduate students who have worked on the project over the years have felt very strongly that this should be open source. John Stewman, the computer scientist who founded DARWIN at Eckerd and remains involved, agrees. So do I.

What are the technical challenges here?

The greatest challenge is accommodating the fact that the images are not acquired in controlled conditions. Biologists photograph the dolphins’ dorsal fins in the wild as their subjects swim. The photographs are taken from varying distances and angles. Lighting is unpredictable. Fins can be silhouettes or have surfaces that are well illuminated. Sometimes a fin is partially occluded by the water, such as when the dolphin is diving, surfacing or swimming a bit below the surface. Some movements actually alter the shape of the fin. There are occlusion problems arising from glare, splash, seaweed and barnacles.

How else are biologists using DARWIN?

Researchers use the software to help identify whales, sharks and goliath grouper. Many humpback whales have flukes with black and white pigmentation patterns that are used to recognize individual animals. But for a subset that has nearly all-black flukes, the nicks and notches along the trailing edge of the fluke are used instead. We believe that DARWIN could be modified in a relatively straightforward way to identify these black flukes. Similar to the pigmentation patterns used with humpbacks, saddle patches (gray areas behind dorsal fins) can be significant in the identification of individual pilot whales. Pigmentation patterns are also used for photo identification of various land animals. The challenges—correcting for variation in poses of the photograph subjects, for instance—are similar for identifying land and marine animals.

Conservation for the Win