Could I suggest that Brian Hayes in "Group Theory in the Bedroom" (Computing Science, September-October) consider mattresses in the form of Möbius strips, maybe arranged as trihexaflexagons for compactness? These would certainly have a simple golden rule for flipping. If they were futons instead, you could even curl up in them a bit. Obviously this design would be useful as a "self righting" raft for emergency use, since it could be straightened out easily even if it ever were flipped. This is only as serious as the spherical cow analogy—ridiculous in itself, but food for thought.

I believe there's a flaw in Brian Hayes's logic for the proof that there can be no golden rule for flipping mattresses. I'm more of a hands-on experimentalist, so I used my copy of American Scientist as an analogue of a mattress. It quickly became obvious that an alternating sequence of any two of your basic flipping operations does indeed yield a golden rule. A roll followed by a pitch followed by another roll then another pitch cycles you through all four orientations and returns you to the original state. Every other pair of operations yields the same result: A golden rule simply consists of alternating any two of the three flipping moves.

I had thought I was the only person nerdy enough to seek a mathematical solution to the problem of mattress flipping, but my column on the subject brought an outpouring of ingenious—and in some cases even practical—suggestions. Mr. Lawrence's proposal of a one-sided Möbius mattress is deeply intriguing; if only I could sleep on such a mattress, I would not only eliminate the flipping problem but also I would never get out of bed on the wrong side in the morning. 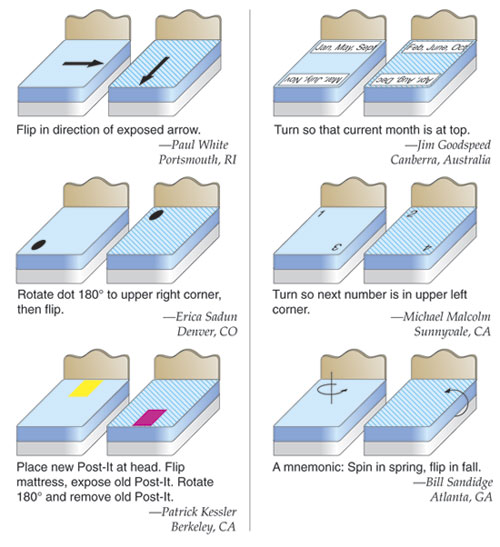 As for Mr. Roberts's algorithm, I agree that it works but not that it's golden. In the column I defined a golden rule as "some set of geometric maneuvers that you could perform in the same way every time in order to cycle through all the configurations of the mattress." Mr. Roberts's rule requires alternating between two different maneuvers and thus is not golden; it's more of a silver rule.

A number of other readers wrote in with methods that qualify as silver rules for mattress flipping, as shown above.