More than 1,200 fossil bones of a new hominin were discovered in Rising Star Cave near Johannesburg, South Africa. Named Homo naledi, this species shares ancestral traits of Australopithecus along with more derived traits of other Homo species, suggesting it may represent a link between the two main branches of the human family tree. This early human was bipedal with a long gait, had a small brain case, and had dexterous hands and wrists for tool use with long thumbs for tree climbing. The bones were found in a remote cave chamber, suggesting they were put there as part of a deliberate burial, but no one understands how primitive humans accessed such a dark, difficult location. Because many of the fossils were found on or just under the surface of the cave, and because the cave sediments are not conducive to radiometric dating, anthropologists are still waiting for the fossils to be dated with other methods. Once their age is known, H. naledi ’s place on the evolutionary tree will be clearer. 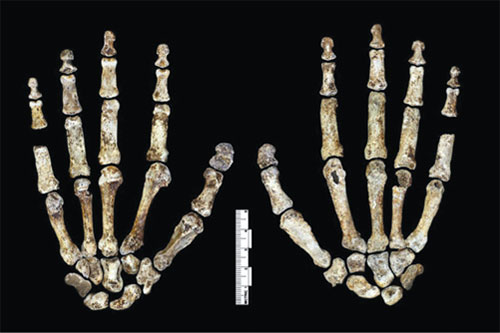 Plants do not have a central nervous system, but researchers have found that they use some of the same signaling hormones for stress that animals do. The neurotransmitter gamma-aminobutyric acid, known as GABA for short, is essential in animal brains and was known to be present in plants under stress. New research shows that this molecule generates electrical signals that regulate growth under stresses like drought, virus infection, or extreme heat or cold. Because GABA bonds to different proteins in animals and plants, the researchers think the molecule evolved independently in these two taxonomic kingdoms. Studying how it works in more ancestral plants could help elucidate that evolutionary process and could also lead to agricultural crops that are more resilient to stress.

The farthest and oldest galaxy ever observed has traits that puzzle astronomers and raise new questions about conditions in the early universe. The galaxy, called EGS8p7, is more than 13.2 billion light years away, meaning that we see it as it was 13.2 billion years ago—not long after the Big Bang, 13.8 billion years ago. Back then, according to theory, the universe was filled with radiation-absorbing neutral hydrogen atoms. Only somewhat later, some 500 million to 1 billion years after the Big Bang, did space turn transparent as the first stars split hydrogen gas into its constituent protons and electrons, a process called ionization. Nevertheless, astronomers detected a type of ultraviolet emission—the Lyman-alpha line—from EGS8p7 that was somehow able to penetrate the fog. One possible explanation is that EGS8p7, which is unusually bright, created a clear bubble of ionized hydrogen earlier than other galaxies of the time. 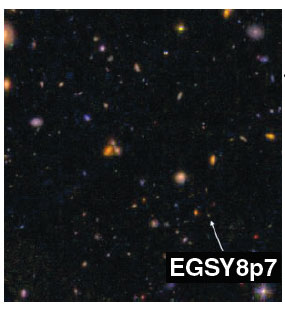 A new study shows the long ignored white-matter brain cells called astrocytes are even more important than we realized. Over the past several years, research has been revealing new roles for the cells in the central nervous system besides nerve cells and the gray matter of the brain. During that time, the functions of astrocytes have expanded to include flushing waste from the brain and helping control appetite. White-matter cells called oligodendrocytes and Schwann cells are already known to help transmit electrical signals, and a new study extends that function to the astrocytes as well. These star-shaped cells also are known to feed, clean, and regulate growth of nerve cells. By growing nerve cells with and without the presence of astrocytes, researchers showed that those with such contact fired signals more quickly and precisely. How astrocytes help with the signals is not yet known, but contact between them and the nerve cells’ message-sending axons appears to be important.

Neutrinos—a class of nearly massless, electrically neutral particles—are valuable cosmic messengers because they can travel unhindered across the universe. In principle, they allow astronomers to probe otherwise inaccessible locations around black holes or inside supernovae. Unfortunately, cosmic neutrinos are also extremely difficult to detect, but researchers are finally making significant progress. After sifting through billions of particles detected between 2010 and 2012 by optical sensors buried in the ice at the South Pole, Albrecht Karle at the University of Wisconsin-Madison and his coauthors identified 12 high-energy muons, particles formed when neutrinos interact with other particles. That is a large enough sample to start identifying the neutrinos’ sources for the first time. After a neutrino collides with another particle, the resulting muon leaves a trail of light that indicates the original neutrino’s trajectory. Tracing that path backward will provide clues about the most distant, energetic, and obscure cosmic events. 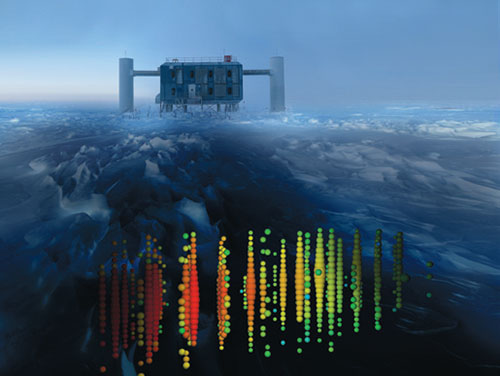 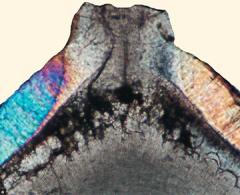 A Story of Serration