Braided rings made from proteins keep neurons together.

An early sign of neurodegenerative disease at the cellular level is often the loss of integrity in axons, the threadlike part of neurons that conduct impulses. To find out what causes that loss of integrity, researchers have been trying to better understand the axon’s lining, called the membrane-associated periodic scaffold (MPS). If neuroscientists can discover what signals the MPS to disassemble, they may gain an early diagnostic tool for neurodegenerative diseases or a new target for drug therapy.

Back in 2013, researchers using advanced optical microscopy identified the presence of rings in the MPS made from the protein actin. At first, the discovery was met with skepticism because no one had seen the rings using electron microscopes, which have more resolution than optical methods. But preparing neurons for electron microscopy often involves dissolving the membrane with a surfactant. “If you remove completely the membrane, you also disorganize the scaffold that is very tightly associated with the membrane,” says Christophe Leterrier, a neuro-biologist at Aix-Marseille Université in France.

To see the periodic rings (shown above in orange at increasing levels of zoom) Leterrier combined optical and electron microscopy. Just as previous researchers had done to visualize the MPS, the first step involved a technique called unroofing a cell, which can isolate a cell’s membrane without disorganizing the underlying scaffold. But the researchers then used electron microscopy to image the same unroofed axon: Teamed up with Stéphane Vassilopoulos, Leterrier’s group essentially made a platinum replica of the MPS and used electron microscopy (shown above in grayscale) on the replica “to really see individual proteins.” The researchers published their findings in Nature Communications, discovering that the rings are like braided wreaths made from long actin filaments. Leterrier says the next step is to find what signal will prompt the MPS to disassemble but will not affect a neuron’s other actin structures, such as dendritic spines, which receive other neurons’ signals. 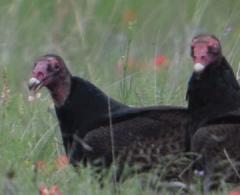