If seeing is believing, feeling may be understanding.

Being able to feel the forces in an unusual structure, even if only by proxy through a model, is a great advantage for engineers, students and laypersons alike. If we can actually be part of the model, and feel the forces directly, all the better. Probably the most famous anthropomorphic model of a major engineering work is that of the Forth Bridge, located near Edinburgh, Scotland. This structure had its origins in the need for fixed crossings of the firths (or estuaries) of the Forth and Tay rivers on the country’s east coast. Without such crossings, rail traffic was interrupted by the need to transfer rolling stock to and from ferries at each river’s shores. The railway engineer Thomas Bouch was commissioned to design the two bridges, and construction of the one across the shallower Firth of Tay was completed in 1878. It was not a particularly daring design, and the bridge was remarkable only for its length of almost two miles across the wide estuary. Unfortunately, the longest and highest girders of the bridge collapsed during a storm in December 1879, killing 75 people who were on the train making the crossing at the time. 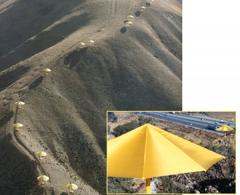