A Walk in the Woods

For the month of April, I decided to visit the Haw River, which flows near where I live, every day. I wouldn’t hold myself strictly to this, but I would try, and I would observe—not impartially, of course, but closely—how I felt. Some days I took leisurely walks with friends, leaning over the railing of the pedestrian bridge to watch the river, high from recent rains, and to smell the distinctive, muddy smell of the water mingled with that of the banks overrun with invasive honeysuckle. On others, coming home late at night, I drove straight down to the bridge and walked out to stare down at the dark water, a move that felt a bit like the natural-world equivalent of visiting a drive-through restaurant. 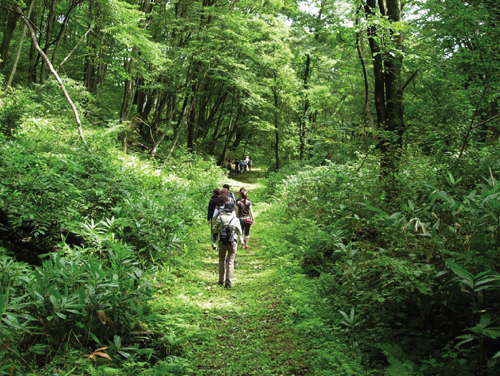 I did this because I hadn’t been spending much time at the river, even though it’s only a short walk from home, and even though I like doing it. The results of my informal experiment? I did, in fact, feel better—calmer, more relaxed, clearer-headed. I suspect that many people have similar feelings about the effects of spending time in the wilder places near where they live. Perhaps that’s why Richard Louv’s 2005 book Last Child in the Woods, which explores the relation between the natural world and children’s development, became a bestseller in the United States.

But to know empirically that these experiences are beneficial—and to know exactly how they might help us—requires more than personal experience. A growing and varied body of research attempts to quantify how and why spending time in the natural world might have beneficial effects on humans’ physical and psychological health. One of the first and most well-known studies, published in Science by Richard S. Ulrich in 1984, found that patients recovering from surgery in rooms with a window facing a natural setting had shorter hospital stays and took less pain medicine than did patients whose window faced a brick wall. Since then, researchers have asked whether the presence of trees influences people’s sense of safety in inner-city neighborhoods; explored how gardening might improve quality of life for people with disabilities; and used physiolgical measures to test for restorative effects of natural environments. If some of these studies seem too specific to be useful in answering the broader question, their results in sum suggest that time spent in nature improves human health. The more difficult questions are how, and in what ways, these effects arise. These questions are not the kind that can be answered by a single, groundbreaking paper; rather, like so many of the subtle and complex problems science explores, the evidence is being deposited, small study by small study, like layers of sediment on a river bed.

One such body of work is accumulating in Japan, where researchers are investigating the physiological effects of shinrin-yoku—“forest bathing,” or, to put it plainly, taking walks in the woods. Qing Li, a professor in the Department of Hygiene and Public Health at Nippon Medical School, Tokyo, has been involved with several such studies. He and his colleagues recently measured specific physiological markers before and after study subjects took walks in a forest and in an urban control environment. The study’s sample size is small—16 male subjects—and the timescale short—effects were measured after one day trip to the forest and one to the city—but the results suggest that the forest trip had positive effects on health. Subjects’ blood pressure measured in the forest was significantly lower when compared to measurements taken in the city. Levels of the stress hormone noradrenaline, measured in urine, were also significantly lower after the forest walk than after the urban walk. And blood levels of the adrenal hormone dehydroepiandrosterone sulfate (DHEA-S) and of adiponectin, a hormone secreted by fat tissue, were higher after the forest walk but not the urban walk. The authors note that DHEA-S may contribute to heart health, among other benefits, and that lower levels of adiponectin are associated with obesity and type 2 diabetes.

Li and his coauthors, whose study appeared in the European Journal of Applied Physiology in March, speculate that the forest trip’s effects on blood pressure may be related to phytoncides, volatile organic compounds (VOCs) that plants produce and release as protection from fungi and bacteria. In a separate study for which Li was also lead author, researchers unsurprisingly found higher concentrations of several phytoncides in a forest than in an urban area of Tokyo.

Another recent study, by Juyoung Lee, a researcher at the Center for Environment, Health and Field Sciences at Chiba University, Japan, and others, offers similar results. In this three-day field experiment, 12 young male subjects visited forest and urban environments. The study, published in February in Public Health, found that in the forest, subjects’ parasympathetic nervous-system activity was heightened and their sympathetic nervous-system activity suppressed. Pulse rates were lower, as were salivary levels of the adrenal hormone cortisol, which is associated with stress. Participants reported that their positive feelings increased, and negative feelings decreased, in the forest. Blood-pressure measurements, however, did not differ significantly between the forest and urban locations. The authors also measured phytoncide levels in the forest study area and found 10 different compounds, ranging in concentration from 0.3 micrograms per cubic meter to 1,336 micrograms per cubic meter.

In support of the idea that phytoncides may be responsible for some of the health effects seen in Li’s study, he and his coauthors cite a 2003 paper that found that inhalation of cedar-wood oil lowered blood pressure. A review article of forest-bathing studies, published in Environmental Health and Preventive Medicine in 2009 by Yuko Tsunetsugu and others, notes several laboratory studies that tested human responses to inhalation of plant VOCs. The results included such positive effects as lowered blood pressure and improved task performance. But to find a correlation between the mixture of phytoncides in forest air and physiological changes in humans would require experiments of more complex design. So although the idea that the very scent of the forest might improve health is appealing, determining whether it’s true and the extent of any effects will need more study.

This is just one of many avenues of inquiry that forest-bathing research opens. Can the physiological effects of studies like Li’s be replicated in larger studies, and in women and children? Do effects differ across gender and age? Do forests in varied bioregions, with different microclimates and compositions of tree species, vary in their effects on health? Do people who have grown up in one region experience different health effects in forests in their home bioregion than in other forests?

Policy questions abound as well. Carol Colfer, a cultural anthropologist and senior associate with the Center for International Forestry Research in Bogor, Indonesia, studies human use of forests in developing countries. “I suppose the logical result would be developing more or at least maintaining existing parks in cities, and expanding protected areas—but with much more serious attention to the human rights of people living in these areas,” she says of Li’s study. “Even better would be encouraging in situ conservation on people’s own lands.” Li is interested in exploring how his results could be used in medicine. “I am planning to develop forest bathing to be a preventive measure for some diseases such as depression, hypertension and cancers,” he says.

What’s clear is that trying to quantify a seemingly intuitive claim—humans benefit from spending time in the natural world—is turning up more complex answers, and more resulting questions, than a fir tree has needles. If policymakers take note of this work as it emerges, they might be better equipped to improve public health. For my part, I’ve extended my efforts to visit the river each day into the month of May. The weather’s better for swimming now, and the air smells as good as ever.