A Realist Vision of the Quantum World

The title of Lee Smolin’s new book may seem a little puzzling, given that Albert Einstein notoriously chose to disregard quantum mechanics rather than suggesting an alternative to it. In 1954, a year before his death, he wrote, “I must seem like an ostrich who forever buries its head in the relativistic sand in order not to face the evil quanta.” And yet Smolin’s title is not that much off the mark, for his ambitious project is to formulate a theory of the quantum world—indeed, of the physical world in its entirety—that satisfies Einstein’s philosophical desiderata. To do so, the theory must be realistic, meaning that it must describe a world that is comprehensible to the human mind but exists independently of it. In Smolin’s words, the theory must explain that matter has “a stable set of properties in and of itself, without regard to our perceptions and knowledge”; furthermore, we must be able to comprehend and describe those properties, and “understand enough about the laws of nature to explain the history of our universe and predict its future.” That is to say, the theory Smolin seeks must realistically capture the true essence of the external world, and it must be fully comprehensible. Moreover, it must be deterministic, meaning that the future state of a system is completely determined by the laws of physics acting on the present state.

“Most scientists are realists about everyday objects on the human scale,” Smolin explains. But on the scale of individual atoms, quantum mechanics has been the most successful theory of nature, and quantum mechanics precludes the sort of realism to which Smolin aspires. He describes three different kinds of anti-realists: The radical anti-realists, such as Niels Bohr, who believe that the properties we ascribe to atoms and elementary particles are not inherent in them but are created by our interactions with them and exist only at the time of measurement; the quantum epistemologists, who believe that science is not about what is real in nature but is only about our knowledge of the world; and the operationalists, who say that quantum mechanics is not about reality but is just a set of procedures for interrogating atoms.

Smolin is a highly regarded theoretical physicist, a modern natural philosopher, who in previous popular books has criticized the contemporary state of fundamental physics. In his influential 2006 book, The Trouble with Physics, he provocatively attacked current developments in string theory for betraying the traditional standards of empirical science. Now he goes deeper, as deep as one can go, by investigating critically and expertly the foundational issues at the heart of quantum mechanics. Smolin does not merely want to revise quantum mechanics or offer yet another interpretation of it. No, he wants to replace it with an ultimate fundamental theory. Because quantum mechanics, according to Smolin, rules out realism, the new theory cannot be quantum-mechanical in nature, and yet he describes it as a completion of quantum mechanics.

It is not entirely clear how Smolin conceives the relationship between his alternative and what is ordinarily understood as quantum mechanics. Like Einstein in the 1930s, Smolin admits the amazing instrumental successes of quantum mechanics, which have long made it a sine qua non for physicists; however, like Einstein, Smolin is unconvinced that these successes imply that quantum mechanics is true. And truth is what matters. The anti-realism and indeterminacy of quantum mechanics led Einstein to reject it as an incomplete description of nature. Einstein’s unfinished mission, alluded to in the title of Smolin’s book, was to find the missing features of nature that would make it possible to construct a true theory of atoms, and Smolin is one of the few modern Einsteinians who have taken up this quest for a realist “theory of everything.” The alternative theory that Smolin is proposing needs to reproduce all of the verified results of standard quantum mechanics—just as Einstein’s theory of relativity needed to reproduce the verified results of Newtonian mechanics—while resting on that deeper truth. How this correspondence might be established is unclear to me.

In Smolin’s view, time is the one and only fundamental substratum of the world, whereas space and the laws of nature are not fundamental in the same sense.

Einstein’s Unfinished Revolution is an eminently readable and engaging account of a most difficult subject area. In plain language Smolin describes by means of analogies the problems with existing quantum theory and the meanings of fundamental concepts such as space, time, and causality. Some of these analogies are illuminating and refreshingly novel, as when he explains the concepts of locality and nonlocality by means of an imagined couple, Anna and Beth, who are both cat lovers but who disagree on other issues. Nonetheless, the book is no easy read, for the simple reason that it deals with topics that are far from easy to understand. Smolin takes the reader on an exciting journey through a dozen or more interpretations of quantum mechanics, some of them more exotic than others. Among the better known, apart from the Copenhagen Interpretation, are pilot wave theory, Bohmian mechanics, and various so-called collapse models. In spite of Smolin’s heroic efforts to explain in a simple manner what it is all about, in the end the reader may feel that he or she has just reached a higher level of confusion.

Smolin is as much a philosopher as a physicist, and he is at his best when it comes to explaining fundamental philosophical categories relevant to quantum theory. In contrast to most other physicists who are engaged in examining foundational problems, he has a solid grasp of the philosophical literature and takes seriously the work of quantum philosophers, such as David Deutsch and Simon Saunders, at the University of Oxford and elsewhere. It is rare to find such an appreciation of professional philosophers among modern physicists.

Readers should be aware that Smolin’s courageous attempt to establish fundamental physics on a new foundation is to some extent a personal project. Based as it is on full-blown realism, the project is of course meant to result in an objective conception of nature that can be comprehended and evaluated by all physicists. But it is more than that. As Smolin candidly writes in an epilogue, for him the book is “a kind of mental therapy,” because writing it has forced him to reexamine the foundations of quantum mechanics and develop them into a radically new conception of the quantum world. Likewise, he admits that his historical sketch of the many quantum controversies is biased in that he definitely sides with Einstein and other physicists in supporting a realistic approach to the quantum world. Realism is a premise, not a conclusion following from arguments.

Nonempirical factors cannot help playing an important role in areas of foundational physics, and Smolin acknowledges that these depend in part on “individual taste and judgment.” In a critical and informative section on the so-called Many Worlds Interpretation of quantum mechanics (which states that every quantum event that has multiple possible outcomes leads to the splintering of the universe into multiple realities), Smolin makes it clear that this theory is not to his taste, even though it ostensibly belongs to the realist camp. When Smolin dismisses the Many Worlds Interpretation as “magical realism,” it is for another reason: because it presents “a moral and ethical quandary.” After all, if there are numerous other copies of ourselves, why should we care about starvation, climate change, and tyranny on planet Earth?

Smolin’s book is structured in three parts, with the first being a semihistorical introduction and the second a critical account of various more or less realist versions of quantum mechanics. Only in the third part does Smolin present his own proposal of a new conceptual foundation for physics and cosmology. This he does in terms of general principles, which have in common that they are all related to Leibniz’s principle of sufficient reason: the metaphysical claim that for every state of affairs there is an explanation of why it is as it is. Impressed by Leibniz’s “shockingly modern” philosophy, Smolin suggests that spacetime is not a continuum but consists instead of hypothetical spacetime atoms, an idea that also appears in some theories of quantum gravity. In Smolin’s view, time is the one and only fundamental substratum of the world, whereas space and the laws of nature are not fundamental in the same sense. They are emergent. It follows that the laws of nature evolve in time, a hypothesis that in different versions has been entertained by physicists for quite some time. One of the radical features of Smolin’s theory is that it denies symmetries and reversibility at the fundamental level, thereby contradicting the known laws of physics, which are symmetric with respect to time.

All of this is very interesting and provocatively innovative, but it begs the question of why we should believe in it. Smolin apparently thinks that some of the consequences of his theory—or vision of a theory—are empirically testable, at least in principle, but he does not elaborate, and he generally pays little attention to the possibility of experimental tests.

The framework of Smolin’s book is in part historical, insofar as he uses the history of quantum physics to defend his cause of finding a realist understanding of the quantum world. Although he admits that he is not a historian of science and that his version of quantum history is merely a collection of “creation myths,” he nonetheless presents a fairly detailed account of the battles that have taken place between realists and anti-realists since the mid-1920s. This account, in which the good guys (from Einstein onward) are contrasted with the bad guys (Niels Bohr and the “Copenhagen ideology”—the belief that reality is fundamentally intertwined with the observer), is entertaining, but it is also one-sided and somewhat misleading. Smolin generally exaggerates the dominance of the so-called Copenhagen orthodoxy, claiming that from about 1930 to 1980 “the anti-realism of the Copenhagenists would be the only version of quantum theory taught.” In fact, most textbooks in the period were nonphilosophical, ignoring the question of realism versus anti-realism, and they did not advocate Bohr’s quantum philosophy.

Unfortunately the book is filled with historical errors. Some of them are fairly innocent, but others are of a more serious nature. For example, Smolin states more than once that Bohr’s atomic theory relied on Einstein’s hypothesis of photons, which is quite wrong. The quantum jumps in Bohr’s atom gave rise to monochromatic light waves, not photons, and Bohr resisted the concept of the photon until 1925. Also, Smolin states that at the turn of the 20th century, belief in atoms was a minority view, when in fact it definitely was a view shared by the majority of physicists. Readers who care about authentic history are advised to read Smolin’s account with critical eyes. Nevertheless, the historical flaws are not essential to Smolin’s overall argument and they do not seriously weaken it.

To summarize, Einstein’s Unfinished Revolution is a rewarding and thought-provoking book written by an eminent physicist-philosopher, one of the few in the great tradition of Einstein and Bohr. However, Smolin’s honest search for a fully comprehensible realist theory of everything may be just a noble dream, a sketch of a future revolution that remains unfinished because it cannot be finished. What Smolin offers in his book is not really a theory but a vision. To borrow a phrase from Einstein (from a 1922 letter commenting on a fundamental unified theory proposed by German physicist Gustav Mie), “it is a fine frame, but one cannot see how it can be filled.” 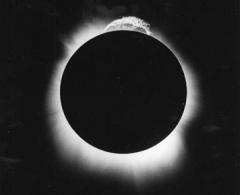