Photographic plates of astronomical images provide data to researchers in the present.

Nothing in the world compares to a collection of some 500,000 historic photographic plates of telescope images obtained over a century by the Harvard College Observatory (HCO). The glass plates originated from Harvard astronomers’ frequent and systematic survey of the sky in both the northern and southern hemispheres between 1885 and 1993. At the HCO today, scientists are making digital copies of the images, not simply to preserve artifacts but to push a new field of research forward. Data collected over such a long period are invaluable to time domain astronomy (TDA), which hunts for clues to unknown stellar and galactic phenomena revealed by the variation in the brightness of stars and galactic nuclei over time. Jonathan Grindlay leads the Digital Access to a Sky Century @ Harvard (DASCH) project. He explained its promise to American Scientist contributing editor Catherine Clabby.

Why was this ambitious imaging started 132 years ago?

The Harvard glass plate images were made to study variability in the brightness of stars, the source of which was largely a mystery in the late 1800s. The cause was clear in binary stars (two orbiting stars can eclipse each other), but sporadic variability and irregular changes were unexplained. So HCO Director Edward Pickering initiated a program to take images with many different Harvard telescopes at Harvard and, significantly, in Peru and later South Africa—the first extensive coverage of the southern sky. The program was interrupted between 1953 and 1968 but resumed until 1993, when photographic plates became unavailable. Some 500,000 plates, the world’s largest collection of images of the entire sky, resulted. Each star typically was imaged about 1,500 times, producing a unique record of stellar variability on timescales up to a century. 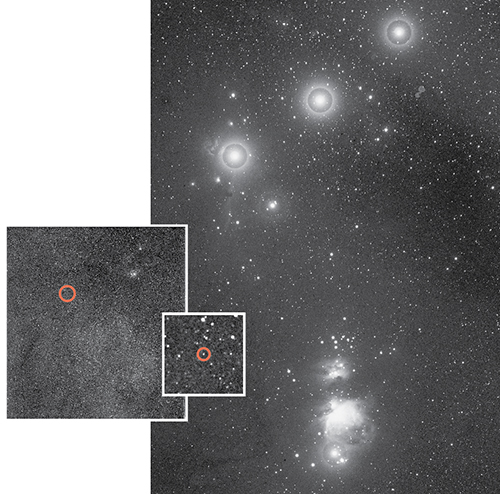 Why was it necessary to create a customized scanner and software to digitize and analyze the plates?

We experimented with commercial scanners but they were too slow and inaccurate. Fortunately, Bob Simcoe, a very capable engineer and an observatory volunteer, was aware of scanners developed for rapid and very precise inspection of flat-panel displays. He designed a plate-holding fixture that allows one or two plates to be moved in precise steps beneath a fixed charged-coupled device (CCD) digital camera that views a 40 x 40 millimeter region of each plate through a precision lens. Our custom DASCH scanner software merges 60 camera images from each plate into one digital image and measures the brightness of each resolved star that is brighter than the sensitivity limit of that plate. DASCH software produces a light curve, a plot of stellar magnitude, or brightness, versus the date when the plate for that magnitude was taken, which can be displayed in less than 10 seconds. DASCH software engineer Ed Los developed our scanner and analysis software pipelines with input from postdoctoral scientists, graduate students and me.

Please explain the promise of time domain astronomy and how these plates are advancing the field.

Time domain astronomy uses temporal variability of objects (stars, jets from stars or galactic nuclei, and galactic nuclei themselves) to probe physical conditions and processes that are best understood by measuring changes over time. Pickering was remarkably prescient in setting up the Harvard “patrol cameras” (as well as larger telescopes) to repeatedly image the sky. The Harvard plates have been used for decades, but purely for visual studies of only a few of the typically 50,000 objects on a given plate. With their records of the full sky, the DASCH data reveal new classes of variables as well as extreme and rare outbursts of objects measured in several TDA surveys underway today. So far only 10 percent of the DASCH plates have been scanned. The rest can be scanned in three to four years if we obtain continued financial support.

What do you consider some of the most interesting things discovered so far using the DASCH data?

A very interesting recent discovery is the light curve produced from multiple images of the same star seen in the smaller image at left. This star, V4641Sgr, was found to be variable in 1978. It was then discovered to be a bright x-ray source in 1999 when a violent flare increased the optical brightness by five magnitudes and a radio jet appeared, making it a microquasar. The star is in a binary system containing a black hole that is accreting from a “normal” star companion in a 2.74-day orbit. The DASCH light curve shows a single large flare in 1901 nearly as bright as that in 1999. This shows that giant flares observable in optical and x rays from black hole x-ray binaries such as this are rare, occurring roughly once per century and lasting only about 10 days, similar to that seen from another microquasar. From this and other data, we can estimate that there are hundreds of similar black hole transients of this type in our galaxy. We also recently discovered historical outbursts from two other black hole sources in the DASCH plates scanned so far. Studies of the historical records of all the known black hole binaries will enable us to estimate the total stellar black hole population in our galaxy.

When you are most optimistic about what these data will reveal, what do you expect they will contribute?

Astrophysics consistently reveals new types of astronomical objects, which teach us new physics that cannot be directly studied in a laboratory. Now with DASCH enabling TDA research on previously unexplored timescales, it is likely we will find more evidence that the universe is richer in objects and observational signatures than we have predicted. The biggest excitement from DASCH will likely be either qualitatively new phenomena from previously known objects or the discovery of entirely new classes of objects, because we now have the means to “observe” on previously inaccessible timescales. The discovery of pulsars came from radio telescopes sensitive to variations faster than a few seconds. Discoveries of x-ray and gamma ray burst sources came from new detector and observation strategies, on timescales of seconds to days. DASCH will be able to reveal new phenomena and objects that vary, or recur, on months to decades to century timescales that previously were impossible to study.

Sparring with the Great Geometer