A Chemical History of the Universe

About a decade ago, experts working to unravel the Milky Way’s history, who were from disciplines as varied as dark matter, gas dynamics, and observations of distant galaxies, came together for a conference, called “Back to the Galaxy II.” Included in this motley group was the merry band that I participate in, the researchers who get excited about the ratio of barium atoms to europium atoms and will not hide our love for what we can learn by comparing the amount of silicon with the amount of iron. Under the onslaught of new research on the chemical compositions of stars, our colleagues were learning about the formation of elements in astrophysical processes. “Where does this element come from and what can we learn from studying it?” was a repeated question. Inese Ivans and I had heard enough: My friend from the University of Utah and I wanted to highlight what kind of stars had produced those elements, with a nod to Carl Sagan’s classic remark that “we are made of star stuff.”

Equipped with a printout of the periodic table, we grabbed a collection of magic markers at a nearby drugstore and set to work defining the physical origin of every element in the universe, color-coding each by how it was created. With the fat tips of the magic markers allowing us the freedom not to worry about getting all the percentages exactly right, we managed not to get bogged down in details and produced a hand-annotated version that we waved in the direction of interested astronomers for the rest of the conference.

The chart Inese and I made was our way of distilling the work of a century. In 1920, Sir Arthur Eddington first proposed that the nuclear fusion of hydrogen into helium powered the Sun. Twenty years later, Nobel laureate Hans Bethe used new nuclear physics data to calculate that nuclear fusion could in fact make the Sun shine. But the connection between the energy source of stars and the chemistry of the gas, stars, and planets in the universe eluded scientists, not because they didn’t understand stars, but because they didn’t understand the nuclei of atoms.

Until a year ago, nobody was sure where the gold in jewelry comes from. Now we know that it’s from merging neutron stars.

It took the dogged work of Margaret and Geoff Burbidge, Fred Hoyle, and Willy Fowler in the 1950s to show conclusively that elements beyond helium were fused in stars and dispersed into the universe during stellar death. One of their triumphs, listed in Fowler’s Nobel Prize citation, was to show that it was possible to fuse helium into carbon, skipping over the pesky in-between elements of lithium, beryllium, and boron.

Although the broad picture was in place by 1960, if we had color-coded the chart by the knowledge of that era, we would have gotten almost all of the details wrong. Key breakthroughs have been piling up, such as the discoveries that the explosion of white dwarfs produces iron and that the earliest generations of solar-mass stars produce lead. Observations of the composition of stars, the gases that dying stars blow off, and the flashes of light produced by decaying radioactive elements were combined with the predictions of sophisticated computer models of the expected fusion inside stars to produce the tables of data that Inese and I converted into splotches of teal, orange, and yellow in 2008.

I like to joke that the average astronomer recognizes three elements in the periodic table: hydrogen, helium, and “metals.” Yes, unlike chemists, astronomers refer not just to gold, tin, silver, and copper, but also to oxygen, neon, and chlorine as metals. As a way of dividing the elements between “those mainly formed in the Big Bang” and “everything else,” the naming scheme works really well.

But of course the universe is not that simple. As stars with different masses and compositions have formed and died, they have enriched the Milky Way’s gas with a wide and ever-changing abundance of elements. A star’s atmosphere is a preserved sample of its natal gas, a fossil record etched onto the surfaces of the stars; and it is the sum of the nucleosynthesis of its stellar ancestors. If we can decode the chemical fingerprint, we can know about the stars that came before. The number of massive stars that have ever existed is not easy to measure by counting black holes, but observing the accumulated “vomit” left as black holes form is much easier.

Because of recent and continuing work on the chemical composition of stars and gases in our galaxy, our infographic continues to evolve with new discoveries and the implementation of my recently acquired Photoshop skills. The current version (above) made its debut at a press conference at the winter meeting of the American Astronomical Society in 2017, where I was part of a team presenting recent results from the Sloan Digital Sky Survey collaboration (SDSS), which has been mapping the universe since 2008. SDSS recently measured the composition of more than 100,000 stars, including the six most common elements in life on Earth. Also, something that didn’t look like a coloring project for really technical people—as the original did—was needed.

The story of the origin of the elements is far from complete. I am keeping the Photoshop file handy so that I can change it. The first edit came in the fall of 2017 with the detection of gravitational waves from colliding neutron stars. Subsequent study of the gravitational waves and light confirmed a theory that these unusual stellar explosions pump out vast quantities of gold and r-process elements (created by the rapid capture of neutrons). Until a year ago, nobody was sure where the gold in jewelry comes from. Now we know that it’s from merging neutron stars.

Now the cloud of uncertainty hangs most strongly over the elements in the middle, such as tin, molybdenum, and my favorite element, arsenic. Elements that aren’t key to powering stars or that aren’t produced in extreme explosions are probably made in small amounts in a variety of places, so it is difficult to find their “smoking gun.” Inese and I took our best guess to color code these elements, but it is only with the enormous data sets being gathered by spectrographs, combined with data for hundreds of millions of stars gathered by the Gaia satellite, that we will be able to pin down what combination of stars produces these neither simple nor extreme elements of the periodic table.

An audio interview with the author: 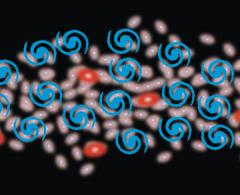 NASA's Next Great Eye on the Sky