Venus, the closest planet, seems like a hellish version of our own; studying how it got that way will tell us a lot about the prospects for life among the stars.

When I started studying planetary geology, I hated Venus. There’s no way to see its surface directly, because the planet is wrapped in an unbroken layer of sulfuric acid clouds. Radar can penetrate the murk, but the resulting images are so limited and ambiguous that it’s almost impossible to tease apart what exactly is going on. And forget about searching for signs of habitability in that jumble. Even though Venus is nearly the same size as Earth and orbits just slightly closer to the Sun, it is nothing like our planet. Its atmosphere consists of unbreathable carbon dioxide, so dense that it practically flows like an ocean. Temperatures on the ground resemble those inside a self-cleaning oven. 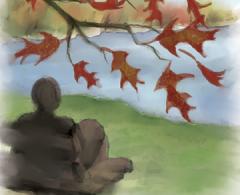 Plants as Teachers and Witnesses